The appearance of circular orbits and the reason why many of the ancient astronomers came to the conclusion that the Sun and stars orbit the Earth is because of the the Earth's rotation. The rotation, somewhat obviously, operates on a daily (close to 24 hour) cycle.

The "fixed" stars appear to orbit the Earth in what's closest to a perfect circle because the Earth's axis doesn't change relative to the Stars (it changes but very gradually), and compared to the stars distance, their movement and Earth's comparatively tiny orbital movement of 2 AU from one side of the sun to the other, makes the stars appear fixed.

The stars appear to complete one orbit or circle around the Earth every sidereal day, or about 23 hours 56 minutes and 4 seconds. 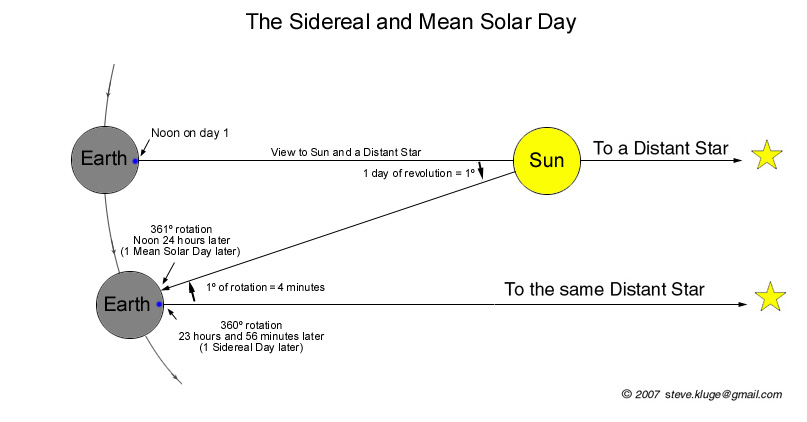 The sun appears to orbit the Earth in an imperfect circle, the circle, as with the stars, is driven by the Earth's rotation but the variation to the circle, which shows itself in how high the sun is in the sky and how long a day is, has to do with Earth's axial tilt, where the Earth is in it's yearly orbit and on your latitude on the Earth. If you lived on the North Pole the sun would appear to move in a circle during the summer, but it would disappear in winter.

As with the Earth, the 3 primary factors to consider are length of day, length of year and axial tilt and in Mercury's or Pluto's case, eccentricity.

Mercury for example has essentially no axial tilt, but it has a 3/2 spin/orbit ratio which, effectively means that a day on Mercury lasts 2 years because it only spins 50% more rapidly than it orbits. Mercury also has a significantly elliptical orbit where, at perihelion, the sun and stars appear to stop in the sky, and this stopping would appear to last a couple earth days.

Because mercury orbits the Sun rather quickly it takes 87 days for the sun to return to the same place in the sky relative to the stars, but because Mercury effectively has 87.6 days worth of daylight and 87.6 days worth of night, the apparent return to where you started would appear every 2 years, every 175.2 days. Still, on Mercury you'd have the impression of everything orbiting the sun in circles, though you might be close enough and have the right angle to make out the phases of Venus, which we couldn't see on Earth until Galileo's telescope. The big weirdness from Mercury would be that the stars would appear to stop in the sky once every 87 days, but they'd also move very slowly so this might go unnoticed without some detailed measurement. Also, on Mercury, you'd observe the sun growing visibly larger or smaller depending on where Mercury was in it's orbit and how close or far from the sun it was.

Venus - the only thing remarkable about Venus is that its day is longer than it's year, so the circles would move in the reverse direction.

Uranus is interesting because it's tilted nearly 90 degrees. It's seasonal variation of the sun would be far greater than Earth's, but a year on Uranus is 84 Earth years, so the apparent solar movement would take a long time from our perspective. 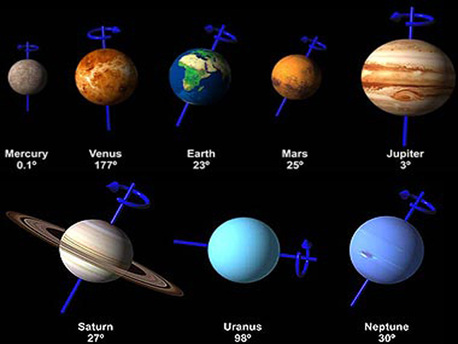 Finally, from Uranus and Neptune the orbital distance might be sufficient enough that parallax could be observed though the effect would still be small, but possibly observable, you might see, from the proper angle, some slight wobble of near-by stars like Alpha Centauri or Sirius.

That's the gist. Whether you call the Sun's apparent motion "approximately circular" is a matter of opinion I suppose, but I wouldn't call it circular. For the closest to circular, you'd want a planet with close to 0 or close to 180 axial tilt (Mercury, Venus, Jupiter), and I don't particularly like the Mercury example cause the Sun stops in the sky once a year. I suppose you could call that a circular movement with a pit-stop in the great race-track of the sky.

There used to be a great simulated video of what the sun passing over Mercury would look like but I can't find it now.

Not the answer you're looking for? Browse other questions tagged orbit orbital-mechanics mercury .

3
Can Mercury hit Earth or Mars in the next 5 billion years?
11
Motion of the sun as observed from mercury
5
What is the orbit of Earth around the Sun?
24
Why is the Moon's orbit so complicated?
3
What is the highest point on Mercury?
20
Does anything orbit the Sun faster than Mercury?
3
What are the Time Zones on Mercury?
1
Retrograde and Crescent Phases Visibility on Mars
3
Could Mercury be a some kind of Chthonian?