How does the Moon look like from different latitudes of the Earth?

I have heard, that on the northern hemisphere, you can estimate a direction of south if you imagine a line going through the tips of the border between illuminated and shadowed part of the Moon, and where this line crosses the horizon, that is estimated direction of the south (and vice versa from the southern hemisphere). 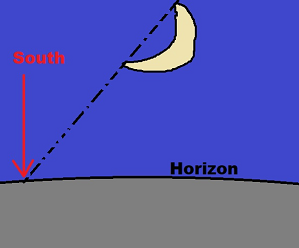 This inspired me to think about how much information could one get simply by observing the Moon. I think you can estimate the latitude of your location. I live in the northern hemisphere and never have been anywhere else, so it's all just an imagination. That's why I need somebody to confirm or correct my conclusions.

I think the angle of the tilt of the Moon will be different as seen from different latitudes. Specificaly near the poles you would see the line between illuminated and shadowed part of the Moon very verticaly. At the equator horizontaly. And somewhere in the middle between the equator and the pole tilted under some angle.

I also think you can use observation of the phase changes througout a month to find out whether you are at the southern or the northern hemisphere. 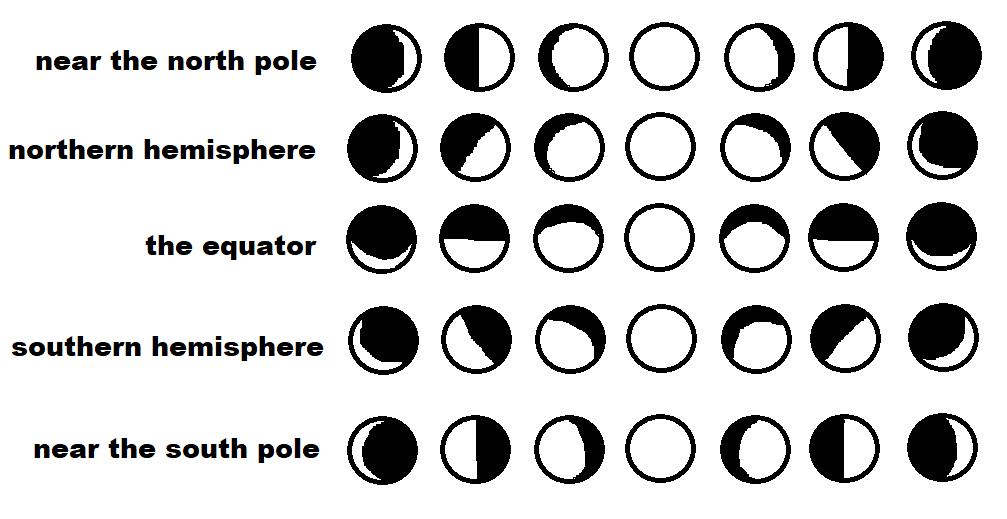 So this is what I imagine the Moon looks like. I have searched the internet for relevant information, but nobody seems to discuss the whole thing in detail. There is only one picture somewhat depicting the tilt of the Moon as seen from 3 different latitudes of the Earth and that's it.

EDIT A software for simulation of the skies (Stellarium) have been recommended to me by @barrycarter and after few hours playing with it, I can clonclude, that the graphics I provided above are accurate.

An interesting observation made while seeing the Moon during daytime. In the real life at the surface of the Earth this observation would not be possible, but the software allows it. Since the Sun is no longer positioned "under horizon", it illuminates the Moon from different angle, than depicted in the grapics.

I made few screeenshots from view from the France (northern hemisphere) of this situation to illustrate what I mean.

It is possible to see, that at nighttime, the moon looks exactly as in the graphics, but as soon as the Sun rises, the illumination direction changes.

Here are some answers to your various comments and questions:

you can estimate a direction of south

True, but it would be a very rough approximation at best. In order for it to be accurate, the bright limb of the Moon would need to face either due east or west on the celestial sphere. (In astronomy terminology, the position angle of the bright limb would need to be 90 or 270 degrees.) In reality, the bright limb of the Moon faces the Sun, which can be north or south of due east/west relative to the Moon. Therefore, the cusps are not north/south, so the cusps can point to the "left or right" of due south on the horizon.

The second problem is using two points just 1/2 degree apart (the two cusps) and extending it to where it meets the horizon (along a great circle, too!). Depending on your location and the Moon's declination, that distance is most likely to be much larger than 1/2 degree. At 40 degrees N latitude, the moon can be approximately 27 to 73 degrees from the southern horizon. (These numbers are when the Moon is on the meridian.) The accuracy of extending such a short line over such a long distance of is going to be very low.

I think you can estimate the latitude of your location

Technically, you can use any astronomical object to determine your latitude. Depending on how you do that, the Moon is probably the worse object to use. In order to estimate your latitude, you need to know the declination of the object (as well as other data or measurements). Because the Moon orbits the Earth, the declination changes "quickly". The Sun or stars are better because their declination moves more slowly or are fixed, respectively. Polaris is the easiest object to use if you are in the northern hemisphere.

I also think you can use observation of the phase changes throughout a month to find out whether you are at the southern or the northern hemisphere.

An interesting observation made while seeing the Moon during daytime. In the real life at the surface of the Earth this observation would not be possible, but the software allows it. Since the Sun is no longer positioned "under horizon", it illuminates the Moon from different angle, than depicted in the graphics.

The Moon is visible during the day, so I do not understand the second sentence. For the rest of the comment, I suggest that you choose a day when the Moon is closer to the Sun and run the simulations. For example, choose a day when the Moon is within 3 or 4 days of New Moon, and watch the Sun and Moon as they cross the sky. The bright limb of the Moon always faces toward the Sun (along a great circle), so the angle of illumination on the Moon changes throughout the day -- just like Stellarium shows. (The Moon's image for Oct 2017 at 8 hours looks a little off to me, but it may just be the difficulty of estimating the great circle direction from the image. Displaying the lines of right ascension and declination may help.)

37
Where can I find the positions of the planets, stars, moons, artificial satellites, etc. and visualize them?
10
Why does a timelapse video of a stationary Milky Way make the horizon appear to move from horizontal to vertical?

20
Is there any point on earth where the moon stays below the horizon for an extended period of time?
2
How do you find the altitude of the Sun if you are on the Moon?
7
Where exactly does the Moon flip, given that it appears the other way up in the other hemisphere?
0
How can I calculate when the new moon will be observed from a particular meridian?
4
Different full moon face on different places on Earth same time
6
Lunar phases if Earth was tidally locked to the Moon
4
How to calculate the moon's illuminated fraction tilt?