Did this paper just argue that there is surely life on Titan?

I just read the popular press version of a new paper, and now I have a question about Titan.

Here are some quotes from the pop article:

A rocky, ocean-bearing planet with more than 0.1 percent methane in its atmosphere should be considered a potentially inhabited planet, the researchers say. And if the atmospheric methane reaches levels of 1 percent or more? In that case, “potentially” doesn’t cut it—such a world would “likely” be home to alien life.

Thus, methane and carbon dioxide together, unaccompanied by carbon monoxide, on a rocky, ocean-bearing world would best be interpreted as an airtight sign of anoxic life.

Now, some information about Titan from the Wikipedia page about Titan:

The density of Titan is consistent with a body that is about 60% rock and 40% water.

There are trace amounts of other hydrocarbons, such as [...] carbon monoxide [...].

If I understand correctly, 'trace amounts' of CO is in line with the requirements stated in the Catling paper.

So, is Titan covered in microbes, or what? Since the article didn't mention Titan, I presume I missed something. What was it?

The underlying assumption in the paper is that the planet has water in liquid form.

The paper suggests that finding both CO2 and CH4 in the atmosphere of a rocky planet in the "habitable zone" (in which water can exist in liquid form) would be hard to explain, without life. Thus one doesn't need to detect atmospheric oxygen. If you can detect both CO2 and CH4, this should be taken as evidence of anoxic life (probably in the form of microbes)

Titan has CH4, but it doens't have much CO2 and there is no liquid water. Titan is not in the habitable zone. On Titan, H2O is a forms part of the "rocks", and the oceans are made of hydrocarbons. Titan is not a good location to look for life as it doesn't have free liquid water. We have a photo from Titan's surface and it isn't covered in Microbes 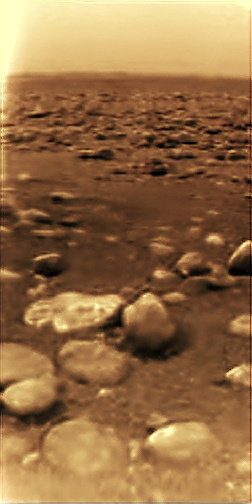 Not the answer you're looking for? Browse other questions tagged astrobiology titan .

3
Available energy for potential life on Titan
2
Is it possible that Titan is a kuiper object captured by Saturn?
2
UK groups that investigate extraterrestrial life
9
Are there other pictures of Titan surface from Huygens?
4
What causes Titan a moon to have a denser atmosphere than that of a Mars?
12
How did Arecibo detect methane lakes on Titan, and image Saturn's rings?
5
Will the conditions that allow life to evolve still be around in a trillion years?
2
What are opinions of most planetary scientists on this study (link below), were there already some complex reviews in scientific journals?