How do observational astronomers manage streaks and other artifacts from objects in Earth Orbit?

There are thousands of satellites and spent rocket parts in low earth orbit (LEO). Mostly near the lines of dawn and dusk they can be in sunlight while observatories below are still viewing the night sky, as are the observatories like Hubble (also in LEO).

They are moving roughly 7 km/sec and as seen from Earth that motion will be roughly a half-degree per second, depending on distance.

While that would strongly impact a one-hour exposure on emulsion, these days solid state imaging is used and these are probably regularly buffered to provide the dynamic range necessary to capture dim objects with very bright images in the same field.

While a fraction of a second streak by a satellite will not normally completely obliterate a long exposure, it is still a problem and it seems would have to be managed in an accepted and systematic way.

Question: How do observational astronomers manage streaks and other artifacts from objects in LEO? Since these things are (usually) carefully tracked and their trajectories predictable, do observatories, or at least observers, ever plan ahead for these events, or schedule to avoid them? Or is it just handled automatically in post-processing?

For subtext, see astronomer Alex Parker's Tweet (image shown below) and then astronomer Benjamin Pope's more recent Tweet about the Humanity Star, as well as his response "Oh god why would you do this to us astronomers"? response here. 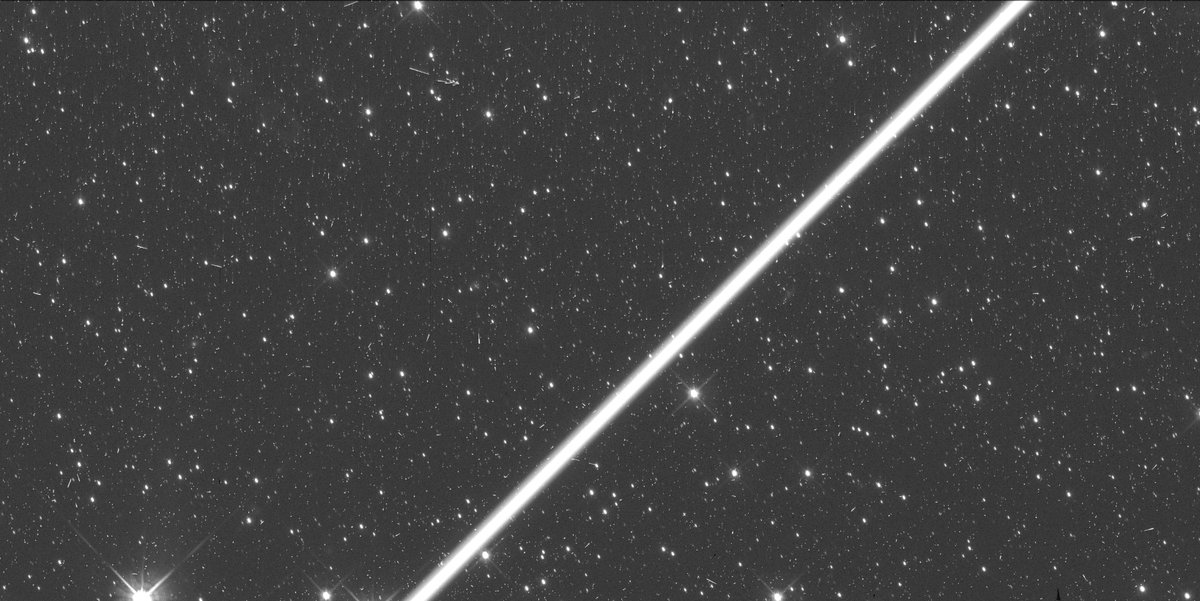 Simple - as you say, in order to get lots of dynamic range in deep astronomical images, you generally need to split your exposure time down into a number of sub-exposures.

When you combine these images, you don't just add them up, you "median stack" them (take the median on a pixel by pixel basis) or perform a slightly more sophisticated flux-weighted averaging that kicks out the outliers.

This process gets rid of any moving objects in the final image as well as cleaning up all the cosmic rays.

The problem with this reflector that has been launched is that it will be the equivalent of a very bright star. It will totally saturate any single image it appears in and might actually be bright enough to damage, or at least leave a persistent image, in some infrared detectors.

11
Can automatic algorithms completely eliminate the impact of Starlink and other satellites?

2
"Mysterious radio signals" - how could a geostationary satellite and Ross-128 line up with Arecibo?
5
Where might astrometric observations of the Roadster spacecraft be catalogued?
2
Help understanding the false MRO observations of hydrated minerals on Mars
3
When would we detect a tiny meter size natural satellite in a geostationary orbits?
14
Will LSST make a significant increase in the rate of astronomical event alerts?
5
What is the LSST's plan to address frequent satellite trails in data?
3
Which kinds of astronomical observations most need to avoid the Moon being up?
1
How are all the intermediate images between the "lensed" and "unlensed" endpoints of this video generated?