Could the dinosaurs have seen the asteroid that killed them?

Wikipedia says the Chicxulub impactor is thought to have been a 10-15 km diameter object. Would it have been visible to a (human*) naked eye before impact? And if so, would it have appeared like a star that grew brighter and brighter each night?

* I know, there were no humans at the time.

The answer is yes; for a few nights prior to the impact (assuming they had eyes with a similar sensitivity to our own and could look up!). It could be a bit longer than this if the body was larger than 10 km (it goes up roughly in proportion to the impactor's radius) and could be much longer if the object was a cometary body or had a very high albedo.

Impacting solar system objects would have relative closing speeds from around 11 to 72 km/s.

We could take the optimal case that the asteroid approaches whilst fully lit by the Sun (which probably precludes the minimum and maximum speed in the range quoted above) and then scale from another similar body - say the asteroid Vesta. This has a diameter of around $a=520$ km, gets as close as $d=1.14$ au from the Earth and has a maximum brightness of about $m=5.2$ apparent magnitude (and is hence just visible to the naked eye) and an observed flux $f = f_0 10^{-0.4m}$, where $f_0$ is a zeropoint for the magnitude scale.

Moving at say 30 km/s, then it gets closer by 2.6 million km per day, thus hitting the Earth about 3 days after becoming a naked eye object. Obviously this would be longer for a slower approach speed or for a larger or more reflective asteroid. But shorter for a smaller, faster asteroid or if the asteroid approached from a direction not fully illuminated by the Sun or had a smaller albedo than Vesta.

An interesting trade-off to think about is if what is determined by measurement is the kinetic energy of the impactor. This would be proportional to the product of its mass and the square of its speed. The mass will be proportional to $a^3$. Thus if we fix the kinetic energy and allow the radius to be bigger, then it becomes visible from further away (roughly proportional to $a$) and will also be moving slower. i.e. A more massive, but slower impactor will likely be visible for a longer period of time and vice-versa.

Another possibility is that the object is of a cometary origin with an icy composition. If that were so then it could be much brighter as a result of sublimation, outgassing and having a bright cometary nucleus and tail. The answer would still be yes, but the visibility period could be weeks (comets are rather unpredictably bright).

It thus seems to me that there is a plausible range of parameters and trajectories where a dinosaur-killing asteroid could be observed and then observed to grow brighter over a few nights, but probably not much longer than that unless it was a comet.

A carbonaceous condrite has the same reflectivity as the moon at around 7-13%.

If there was ice, if the tail was 10 times smaller than Hale-Bopp, it would have auspiciously covered half of the sky. it could have made an incredible display in the 1-2 days preceding the collision, because it was as close to the sun as Hale-Bopp, the brightest astronomical apparition in history, although it was 100 times closer to the earth in the final days than Hale-Bopp. Hale-Bopp's trail was 1.5 million km long, so the KT asteroid would have needed a tail 100 times smaller, to appear as bright as Hale Bopp in the final 2 days! https://www.google.com/amp/s/www.space.com/amp/20354-dinosaur-extinction-caused-by-comet.html

If you were 1000km south of Chixculub, it would stay fairly constantly thumb sized for 10-20 seconds as it arrived from the South-East at 60 degrees, and in that time it would travel from 1500km above to 1000km on the horizon. The graph suggests it had a rotation period of about 2 to 10 seconds, so it would have revolved noticeably. 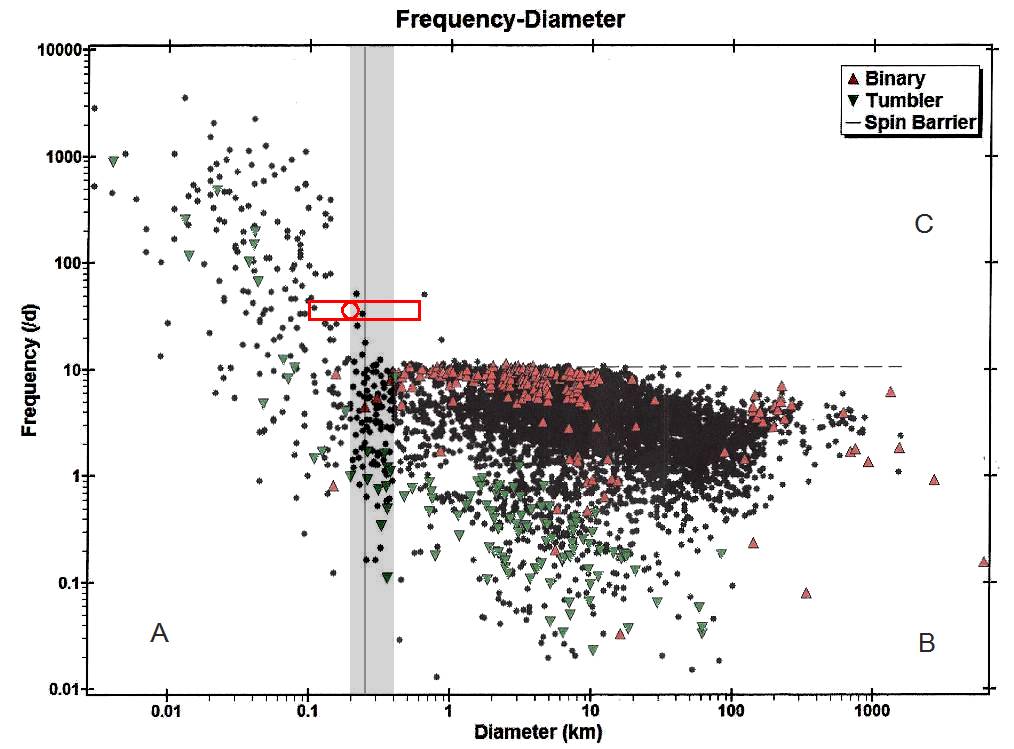 If you were 100km away from the impact, it would grow from thumb size to hand sized for 10-20 seconds. Then it would hit the atmosphere at 50km and the sky would ignite about 5 seconds prior to landfall.

For most of the dinosaurs far away, it would be like holding a pea or a matchstick at arms length.

Perhaps it would be brighter than Venus from 75000 km away; that's about 125 minutes prior to the impact.

It would have been like a fire fly landing slowly on a tennis court if the dino was on the other side of the world.

Mammals were nocturnal previous to the impact which is why mammals have developed whiskers, awesome hearing and only bichromatic photoreceptors of G.B, and mammal skin burns from UV. Only primates have R.G.B. Dinosaurs had R.G.B because birds have the same gene to encode red photoreceptors as tortoises who can also see red, so scientists think that dino's had vision as good as birds, and have better vision than mammals, especially used for detecting movement and for flying.

EDIT: On wiki, the estimated diameter of the comet has been changed to 10-80km. Hale-Bopp comet was 20-40km, and it was visible for months as one of the brightest comets in human history, with a similar aphelion of 0.914AU. That implies that the dinosaur comet may have been visible for many days prior to impact, because it would have been 5 times closer than Hale-Bopp at the end. It's possible that it was very bright in the sky for a week prior to impact.

Not the answer you're looking for? Browse other questions tagged asteroids history comets naked-eye chicxulub .

28
How early could we detect an asteroid the size of the one that caused the extinction of the dinosaurs?
4
Detecting a Rogue Planet from Earth

6
How bright are the outer planets, when at close range?
2
What fraction of starlight, seen from Earth, is actually reflected light?
9
Will the nebula of Betelgeuse be visible to the naked eye? How bright, how large, how soon, for how long?
3
Has a near earth object in heliocentric orbit ever been bright enough to be visible to the unaided eye?
28
How early could we detect an asteroid the size of the one that caused the extinction of the dinosaurs?
13
How loud was the asteroid that killed the dinosaurs?
5
What percentage of meteors are visible to the naked eye?
3
With only seemingly two measurements 30 minutes apart, how were astronomers able to determine that asteroid 2022 EB5's trajectory intersected Earth?