Is the Milky Way seen as how it looked millions of years ago?

The distant an interstellar object is, the more time is required for light to travel, which is known, measured as light years. So are the farthest stars and gas clusters in the Milky Way seen as how they looked millions of years ago & not how as they look today?

Most of the matter in the Milky Way is contained within a radius of 100,000 light-years from the galactic center. This encompasses the disk and most of the halo, including halo stars and globular clusters. It also includes quite a few (though not all) of the Milky Way's satellite galaxies. This is rather large - the Sun is only about 25,000 light-years from the galactic center - but not truly inter-galactic scales. Andromeda, the nearest large spiral galaxy, is 2.5 million light-years away, and so we see it as it was 2.5 million years ago. However, we see most of the objects in the Milky Way as they were no more than 100-200,000 years ago, usually much closer to the present day.

It's true that some galaxies are a couple million light-years across, but they are quite rare. In fact, the largest known spiral galaxy, Malin 1, is a mere 650,000 light-years in diameter. I should make it clear, though, that most of these galaxies are large because they have extremely large halos, consisting of gas, pockets of stars, and dark matter. Most matter is not contained in the halo. Additionally, it is not always clear where a galaxy ends and where the intergalactic medium begins.

75,000 years is very little time compared to the 230 million years that it takes our sun to orbit the milky way, and if the outer stars orbit slightly faster (lets say 225 million years), that's just 1/3000th of an orbit, so the stars wouldn't have moved much.

What would change, if we could see it, is that stars close to each other would dance around. 75,000 years is enough time for stars to move relative to their closes neighbors. More info here and chart below. 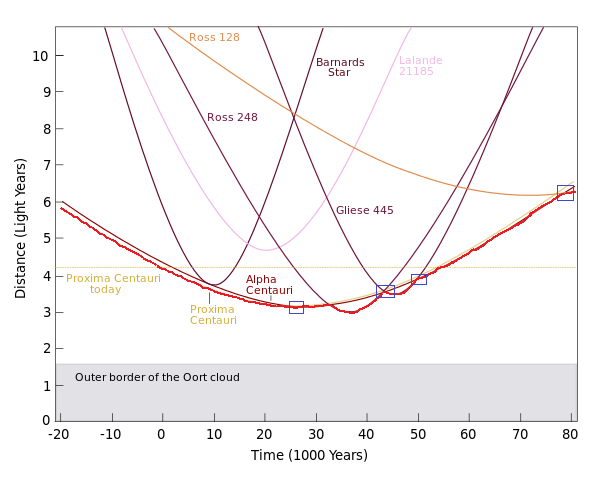 We don't have telescopes good enough to make out details like that on the other side of the galaxy, but that's an example of something we see that would have changed in 75,000 years.

As a somewhat related sidebar, Ole Rømer used this understanding to calculate the speed of light by watching Jupiter and measuring when it's moon Io passed behind it viewed from Earth. That only works for repeating orbits though.

Yes, every object we see is how it was when the light reflected off it's surface or left it's surface(in case of self-luminous objects).

Even the sun we see is 8 light minutes old. Proxima Centauri the nearest star to our Solar System appears as it was 4 years prior, as it is 4 light years away.

Andromeda Galaxy appears to us as it was 2.5 million years ago.

If someone is present in the Andromeda and looking at Earth, then they would see how Earth was 2.5 million years ago. Theoretically they could see ancient humans roam the Earth.

Not the answer you're looking for? Browse other questions tagged galaxy distances milky-way or ask your own question.

4
Are there good animations of the movement of proximate stars over long time periods?

7
When we say a galaxy is 200 million light years away, does this account for the expansion of space in the time it took it's light to reach us?
23
What will happen to life on Earth when the Andromeda and Milky Way galaxies collide?
15
How much overlap will the Andromeda galaxy and the Milky Way have when they collide?
12
Why don't we see "the milky way" in both directions?
7
What does the milky way look like from earth to the human eye without light pollution?
4
How many galaxies can be seen in a given patch of sky
0
Why is SPT0418-47 ("the most distant Milky Way look-alike") expected to evolve into an elliptical galaxy?
5
How do astronomers calculate the period about the wave motion of the solar system in the Milky Way?