The new paper Probing Planets in Extragalactic Galaxies Using Quasar Microlensing (also in ArXiv) is too mind-boggling for me to understand exactly what is happening.

I have some very basic understanding of gravitational microlensing from other Q&A here (and Wikipedia) but I can't figure out what is happening in this paper.

There are thousands of planets seen in another galaxy, which do not orbit stars? There is discussion of "emission close to the event horizon of the supermassive black hole of the background quasar"... there are too many unusual things going on at once for me to fathom.

Is it possible for someone to sort out the basics of what's happening? The Quasar is in front, and the galaxy containing these planets is behind? What emission?

Instead of reading half-comprehensible newspaper articles, I found it more helpful to go to the original source.

There, the authors explain their method very clearly:

And where the 'micro' in microlensing comes in is

Light from these Quasar images crosses different locations of the foreground galaxy and is further lensed by nearby stars in the region in the lens galaxy.

So what is important here is:

Now comes physics into play. The authors argue that they find anomalously high red- and blue-shifted $\rm K\alpha$-line distributions, that must be explained by planetary-mass objects.

To understand how, let's consider fig. 1 from the paper: 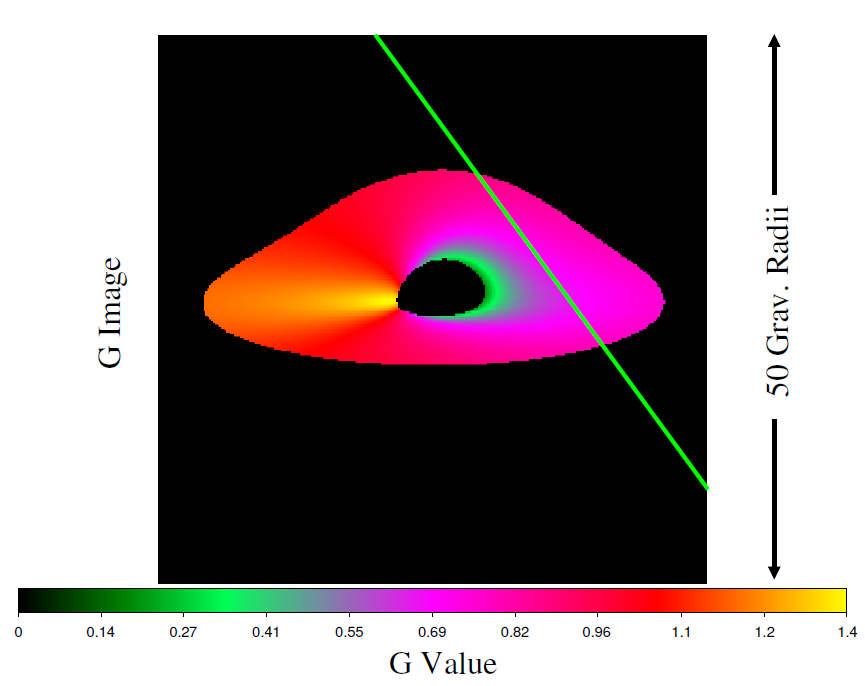 This shows the redshift distribution (The factor $G = \frac{E_{observed} }{ E_{rest-frame} }$) around the background Quasar accretion disc. Also shown is an example trace of a foreground object that could lens the emitted $K \alpha$ light from the disc.

** The rest of the problem can now be understood in a very visual way:

If the passing foreground object can actually lens the light in a way that would be seen in the spectrum is now determined by the ratio of the SMBH Gravitational radius and the foreground's object lens radius. This works as follows:

The gravitational radius is just the Schwarzschild radius $r_g = GM/c^2$ and sets the scale of the above image. The lens radius $r_l$ is a more involved function of cosmological distance and lens mass. One can imagine it however, being a circle traveling on the green trajectory in fig 1. that will lens all the background light that it hits into one observational data point.
The latter point must be emphasized, as the situation in fig 1. will be vastly under-resolved in the actual observation.

So if $r_l \gg r_g$ the lens will lens red- as well as blue-shifted $\rm K\alpha$-light into the image pixel and no net energyshift will be detected. If $r_l \le r_g$, then the lensed light will probably be very red or blue-shifted, according to the G-values it hits on it's trajectory.

Now the lensing configuration of RXJ1131-1231 and their cosmological distances conspire to make the case $r_g = r_l$ correspond to Jupiter mass lens masses. This means objects of Jupiter masses and below will be able to contribute to a measurable Fe $\rm K\alpha$ redshift, but only if they are not buried in the larger lensing radius of a star (which would have $r_l \le r_g$)!

But, as we already said, the authors only can spectroscopic information about the lensed images. So they try to reproduce the redshift-distribution of the spectrae of their images with a star-only distribution, which fails.

Subsequent tests they make, indicate that they have to inject a large number of objects with $r_g=r_l$ into their test-lensing distribution to reproduce their data.

Summarizing: This is a purely statistical argument for microlensing by a certain number of planetary-mass bodies in the X-Ray spectrae of 3 of their 4 macrolensed images. It's not a discovery and as another Q&A pointed out, there are no planets to name or point to.
It is even not the only explanation for the X-Ray data seen, as there are other competing ones. But the presented planetary explanation is the only one that can reach sufficient redshifts seen in the data.

(P.S. I hope I didn't make it more complicated than the original paper, I've actually tried to summarize it...)

Not the answer you're looking for? Browse other questions tagged exoplanet gravitational-lensing or ask your own question.

3
How to name planets outside our galaxy?

8
Is there an upper limit to the mass of terrestrial planets?
5
Are the planets Trappist-1 in the solar system?
3
Isn't it likely that most extra solar planets don't transit their star in line with the Earth?
3
Extra-solar identification of binary planets
8
Estimates for "undetectable" planets in extra-solar systems
2
How are microlensing events used to constrain the size of innermost stable circular orbits around spinning black holes?
1
View of other planets from the Earth
2
What is the relative velocity between planets in different solar systems?
0
Could the mineral composition of planets explain the absence of megastructures?