How would latitude affect day/night lengths on a planet with no axial tilt?

How would the length of day and night change with changes in latitude on a planet with no axial tilt?

Would the poles of the planet be in constant sunlight?

The length of the day would be the same on (almost) every latitude, and just a bit longer than the night. The reason for that is that the planet's star (let's call it 'Sun') is a disk, not a point. So even if the middle of the Sun is below the horizon, part of it might still be above the horizon and it's technically 'day'. For the same reason, the length of an Earth day at Equinox is slightly more than 12 hours.

At the poles, and a small region around them (depending on the apparent size of the Sun), it will always be day. At the North Pole of the planet, you will always see exactly the northern half of the Sun; the southern half will always be under the horizon. It will still take the Sun exactly the same amount of time to go 'around' the sky 360 degrees as it will on the equator or any other place on the planet.

The diagrams in the Wikipedia article are a good visualization how every day on such a planet would look like (click to enlarge): 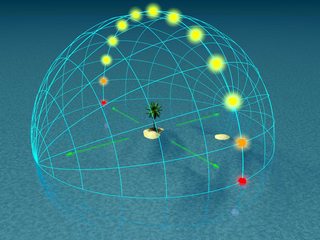 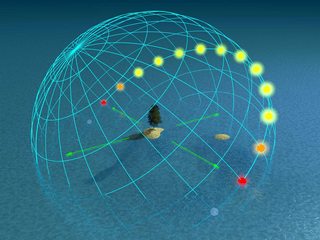 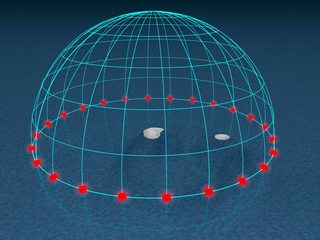 10
Given a date obtain latitude and longitude where is the sun zenith
6
How does the appearance of the analemma vary with latitude
4
Why would the Earth's solar analemma would be still a figue eight even if Earth's orbit was circular?
21
How bright would the sun appear from the hypothetical Planet Nine proposed by Caltech?
9
Why do our clocks not go out of sync with the day over a year?
27
Does the Sun have permanent geographical features?
3
Expression for length of sunrise/sunset as function of latitude and day-of-year
42
Why does the Sun have different day lengths, but not the gas giants?
2
Why is the equinoxes only 2 days and not more?