How would one calculate the synodic period of the Earth and an elliptical orbit?

For example, when would someone with a telescope be able to see Starman and his Roadster (when will the Tesla roadster's elliptical orbit cross ours again, and how would that be calculated?)

The synodic period would be the same. For this object it will be about:

You can confirm that by reading this new ArXiv preprint about Roadster: The random walk of cars and their collision probabilities with planets. In the 2nd paragraph of Section 3 it says:

The bodies reach the same orbital longitude on their synodic timescale of ∼ 2.8 yrs.

There's a slight difference, since the Roadster's orbit continues to be refined, and the paper is about evolution over long timescales.

However, I think what you really want to know are the times of closest approach when (at least) one orbit is significantly eccentric, and those will not be periodic or come at regular intervals.

Well the Roadster is quite far away now and moving farther rapidly. See this answer for some details and some nice images from medium-sized tracking telescopes. It's already dimmer than +22 magnitude as seen from Earth, and as far as I know there won't be any really close approaches to Earth for a long time.

But to answer your question, the period is about 557 days. You can see this for example if you go to JPL's Horizons and look at the osculating elements. If you look a few weeks in the future when the Roadster is sufficiently far away from Earth not to be perturbed, the period around the Sun flattens out to 557 days. 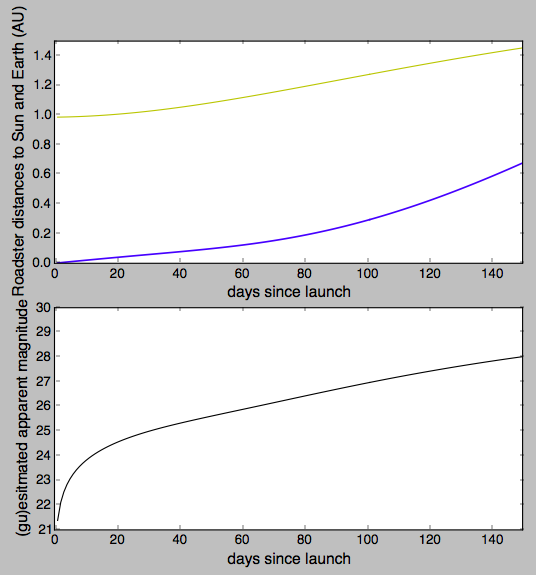 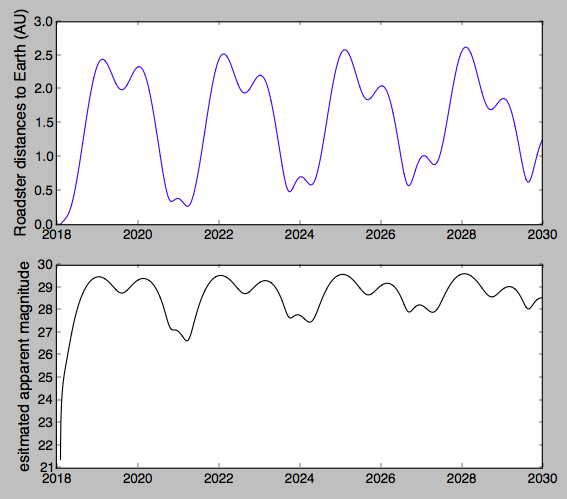 above x2: Top: Distance data from JPL's Horizons plotted using Python from here. Bottom: Estimated apparent magnitude using distances from Horizons plus math shown in the text of this answer. Your milage may vary, but probably within +/-2 magnitudes of "official" predictions when they come out.

A really cool GIF can be seen in the Space.com article Observatory Spots Elon Musk's Tesla Roadster Zooming Through Space (Video). It is over 7 MB so I can't add it here. However, here are ten frames from somewhere in the middle. Still, you should go see the whole thing.

DEMIOS image below, from here as also tweeted by Jonathan McDowell. The little dot near the center moving to the right and up is Roadster in reflected sunlight, probably mostly from the white FH 2nd stage still attached.

Not the answer you're looking for? Browse other questions tagged orbit orbital-migration eccentric-orbit .

10
What orbital period would produce one New Moon (and one Full Moon) each year? What other effects would this produce?
7
What is the period of Jupiter being visible in the sky?
8
How will planets behave in the night sky as seen by Mars colonists?
6
Where might astrometric observations of the Roadster spacecraft be catalogued?
5
What variables are needed to calculate simple horseshoe orbit times?
8
Horseshoe orbits and integration in C
4
Might the SpaceX Roadster intercept any ongoing surveys?
3
When can Moon occult Venus?

7
Calculate angle of inclination for a certain angle in a planet's orbit?
1
Two body orbit of equal masses
1
Which approximations are required for the synodic period formula?
0
On gravitational wave radiation and arrangement of galaxies post- big bang
4
How would one calculate the synodic period between 3 planets?
1
How to find the Orbital Period of two Binary Planets around a Single Star?
1
Can Kepler's 3rd Law be applied in higher dimensions to describe orbits (quadric surfaces)?
6
Cannot identify mistake in calculating orbital eccentricity vector; magnitude equals one instead of zero (with python code)
2
Is Jupiter really shepherding the main belt, and Neptune the Kuiper belt?