Binary Orbit around the Earth?

Is a orbit possible where 2 objects going in opposite directions can intersect repeatedly with minor course corrections? 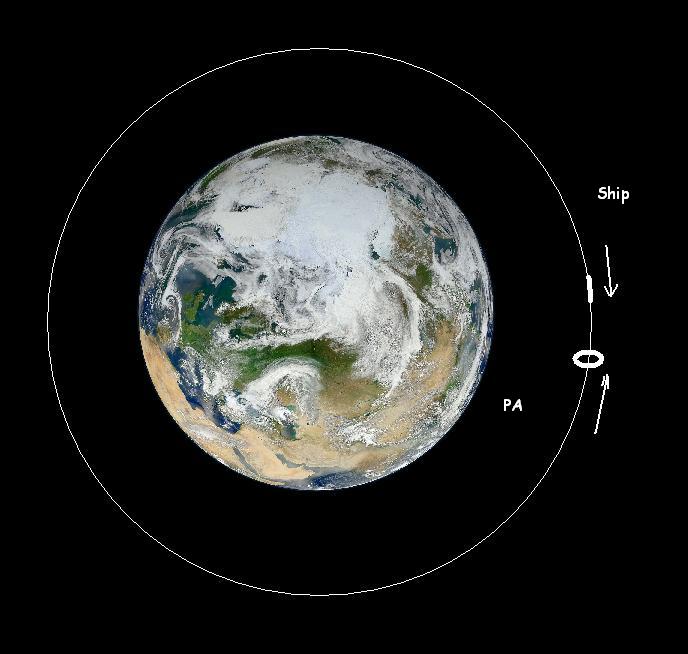 I'm not sure I see the point to this question, but if one of the orbiting objects is hollow and you allow for course correction, then yes, one object passing through the other is possible.

I don't see what force would keep the object with a hole in the middle properly positioned so it was in effect perpendicular to the movement of the other objects. There's also problems with the orbits lining up just right rather than missing and giving each other a gravitational push, and with gravitational perturbations from the sun and the moon. A system like that would be a lot easier and require less adjustment if the Sun and Moon weren't there.

You'd probably want both orbits to be over the equator to reduce fluctuations, but eliminating fluctuations would be impossible. Every orbit would probably require some adjustment, and while it's theoretically possible, I'm not sure I see why anyone would want too - apart from perhaps it would look cool.

4
Why do objects all orbit in the same direction?
7
If earth changed its orbit, what would happen to the moon?
4
Can a binary star optically “orbit” a planet?
2
How did “oddball” Valetudo, Jupiter's new prograde moon, end up in a wider orbit?
3
Did the Moon ever approximate a geosynchronous orbit above the early Earth?
0
If a solar system were surrounded by a cloud of debris, is it possible for a planet's orbit to intersect it?
46
Does the Milky Way orbit around anything?
3
How feasible would it be to get to a planet orbiting directly opposite Earth?
3
Is a trefoil orbit around a trinary star valid?