Active Galactic Nuclei - categorisation on the basis of observer?

As we know AGNs are considered to be one of the most luminous objects to be found in the cosmos.Based on the observer, for instance on Earth, we categorize them on the basis of the angle between the observer and the object. Suppose for instance there are two observers, one on Earth and one on some distant planet (far away from our solar system, let it be on the opposite side of the Milky Way relative to us). Would both the observers relate an AGN belonging to the same class? In other words, can these categories be relative to their viewing? Like an object can be a QSO to us but to the other observer can the same object be a Seyfert or a Blazar or an RG?

Yes, but most probably not in your mentioned example. You need larger distances to make a difference, I guess. However, it is by now largely accepted a unification model for AGNs, where the difference are mostly due to the angle of line of sight. 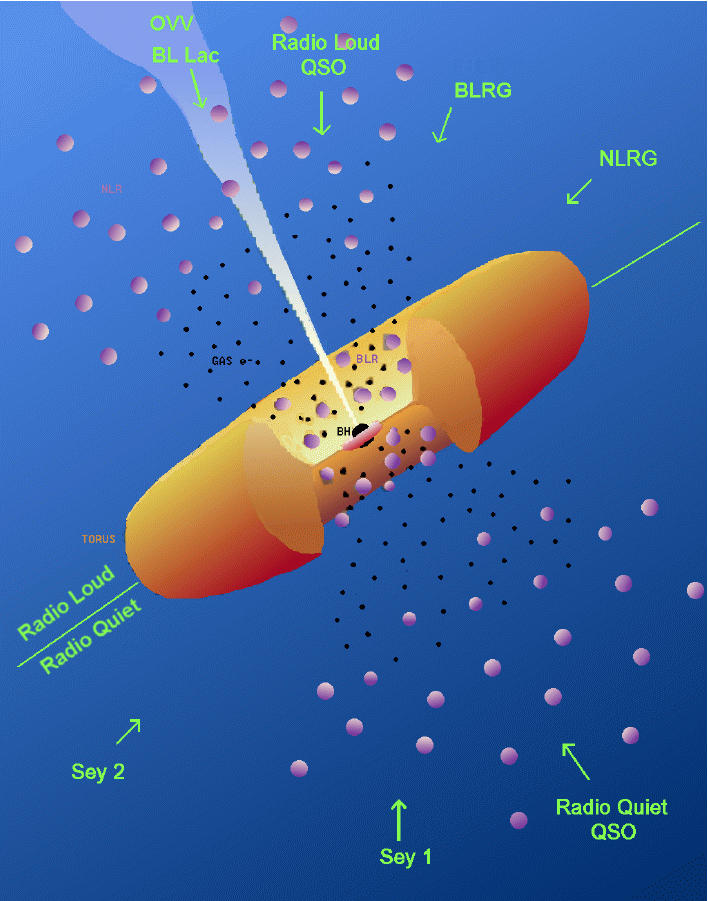 First introduced by Urry & Padovani, then developed for further observations.

Anyway, this is only half of the truth, since the AGNs evolve, and in this evolution feedback on the host galaxy is exerted. Also, the amount of feeding/obscuring gas is varying with time (redshift) and this has to be taken into account for a correct classification. For the jets too, it is also possible that they forms only in certain stages of the AGN life... As usual in astronomy, things are much more complicated than simple catalogs/models !

2
Classification of Active Galaxies
5
Structure of the torus of the Active Galactic Nucleus
1
What is a Galactic Eclipse?
0
What are the 10 most abundant elements in the universe by number of atomic nuclei?
1
Direction Names Within a Galaxy
6
Are the stars outside of the galactic plane in the galactic halo?
5
How active was the Milky Way in its first 5 billion years?
2
Why are galactic nuclei yellow?
18
How are constellations intact if the stars are rotating around galactic nuclei?