I am reading about massive stars and their final consequences. what I understood is massive stars after throwing out their outer envelop with masses > 1.4 solar Mass turn into neutron stars. But I also know that Massive stars can collapse to form a type II supernova. I need to understand how we determine which stars go through which final fate. And what initial mass they have to start their life with for both fates.

I ma be completely wrong with my understandings. Your clarifications will help a lot.

To clearify: In your question you distinguish between a star forming a neutron star when its core exceeds the Chandrasekhar limit and a star undergoing a Type II supernova. These are, however, the same events.

To summarize: Generally an isolated star can die in one of basically four ways. With increasing probability with increasing mass these outcomes are:

1. Formation of a white dwarf: This is the outcome for stars with a initial mass below ~10 solar masses and includes our sun. This includes about 97% of all stars, as small stars are the most abundant.
At the end of its lifetime, when it has burned though all the hydrogen accessible to its core, it will start to burn gradually heavier elements in its contracting core. Up to which element this can go depends on the initial mass of the star. During this process the outer layers of the star begin to expands and it enters the red giant phase. At the end of which they shed their outer layers which then form a planetary nebular. All that is left after that is the cooling core of heavier elements. The white dwarf. This white dwarf is held up against gravity by degenerate electron pressure. This means the electrons are so close together that, to contract further, they have to be pushed in an higher energy state to not violate the Pauli exclusion principle. An example would be the beautiful Ring Nebular where you can easily see the white dwarf in the middle. 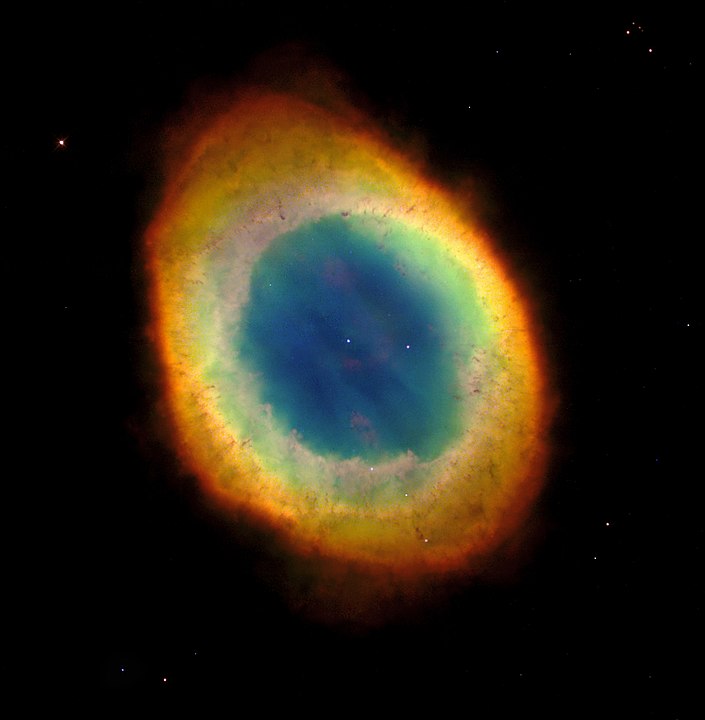 2. Supernova and the formation of a Neutron star: The core of heavier stars ($9-100 M_{\odot}$) are, too, mostly held up by degenerate electron. During the lifetime of the star more and more heavy elements collect in a growing core. With increasing core mass/density, however, the electrons reach higher and higher energies. At some point these energies become high enough for electrons to be "pushed" into protons, becoming neutrons and releasing lots neutrinos in the process. This reduces the degenerate pressure until it can no longer support the core against the gravitational pressure of the outer layers. This happens when the core exceeds the mentioned Chandrasekhar limit. This is what initializes the core-collapse of heavier stars.

Even heavier stars with hotter cores are increasing held up not only by degenerate pressure but regular thermal pressure. For those stars the collapse is additionally promoted when photodisintegration of heavy elements saps the core of more and more thermal energy and leads to its further contraction. (See the first pages here for a more detailed description of how the SN is triggered)

Independent from how the collapse started, it continues until at some point the degenerate neutron pressure and most importantly the repulsion of the strong nuclear force kicks in. At this point the core-collapse suddenly halts and the proto-neutron star becomes virtually incompressible. This all happens so fast, that the outer shells basically free-fall onto the proto-NS and "bounce off". Together with the energy provided by the intense neutrino flux, this drives away the outer shells and leads to the explosion of the star. This is a core-collapse supernova. All that is left is a expanding supernova remnant and a central neutron star, a pulsar. The composition of the remaining outer layers at the time of the explosion determines the type of the SN.
Most famous example: The Crab nebular. 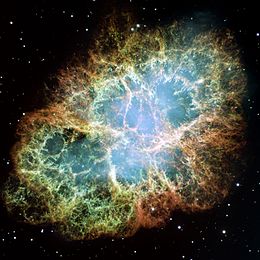 3. Core-collapse SN with black hole formation: At higher masses it can happen that not all of the outer layers can escape the gravitational well of the proto-NS. Some part of it can fall back onto it. During this process the NS can gain mass again and eventually exceed the Oppenheimer-Volkoff-Limit. When this happens even the pressure from the degenerate neutron gas is not sufficient anymore. At this point there is nothing that can stop the gravitational collapse to a black hole. The accretion of the additional material again releases huge amounts of energy and can lead to the formation of jets. This is what is suspected to be a Hypernova and can be accompanied by a gamma ray burst (GRB).
See below for and animation of a jet braking though the expanding supernova shell and producing a GRB:

4. Core-collapse with direct BH formation: An alternative, less violent way for forming a BH is a direct collapse. This mostly happens for very heavy stars. In this scenario the proto-neutron star is unable to initialize the ejection of the outer layers and just collapses to a BH. No huge explosion, no supernova remnant. This is sometimes called a failed supernova. And we have actually seen such a star just disappearing: 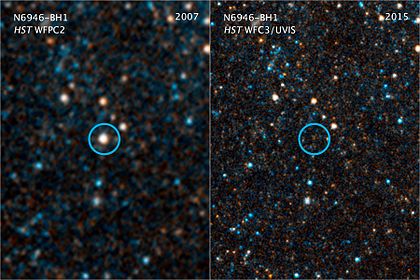 5. Pair-instability supernova and complete disruption: For stars with masses between about 140 and 260 $M_{\odot}$ (see respective gap in the figure below) temperatures in the core can become hot enough that thermal radiation reaches gamma ray energies. Specifically photons can reach energies high enough to produce e$^-$/e$^+$ pairs. This process transfers thermal energy into the mass of the formed particles. This leads to a contraction of the core. At that stage the core has not jet fused many heavy elements and consists mostly of Helium, which now undergoes rapid fusion as the core contracts. The released energy complete disrupts the stars leaving no compact core and only an expanding shell. Such heavy stars mostly formed in the early universe as the first generation of stars.

Which one of the scenarios 2 - 4 will happen to a star with a zero-age main-sequence (ZAMS) mass of more than 15 solar masses is hard to tell and an active field of research. It all depends on ZAMS mass, binarity, metallicity, angular momentum, and magnetic fields, among others properties of the progenitor star. Current computational capabilities are just not enough to produce reliable 3D magneto-hydrodynamic simulations with good temporal and spacial resolution and scale.

But from here there is a rough estimate of what we think is the most probable outcome for different masses and metallicities: 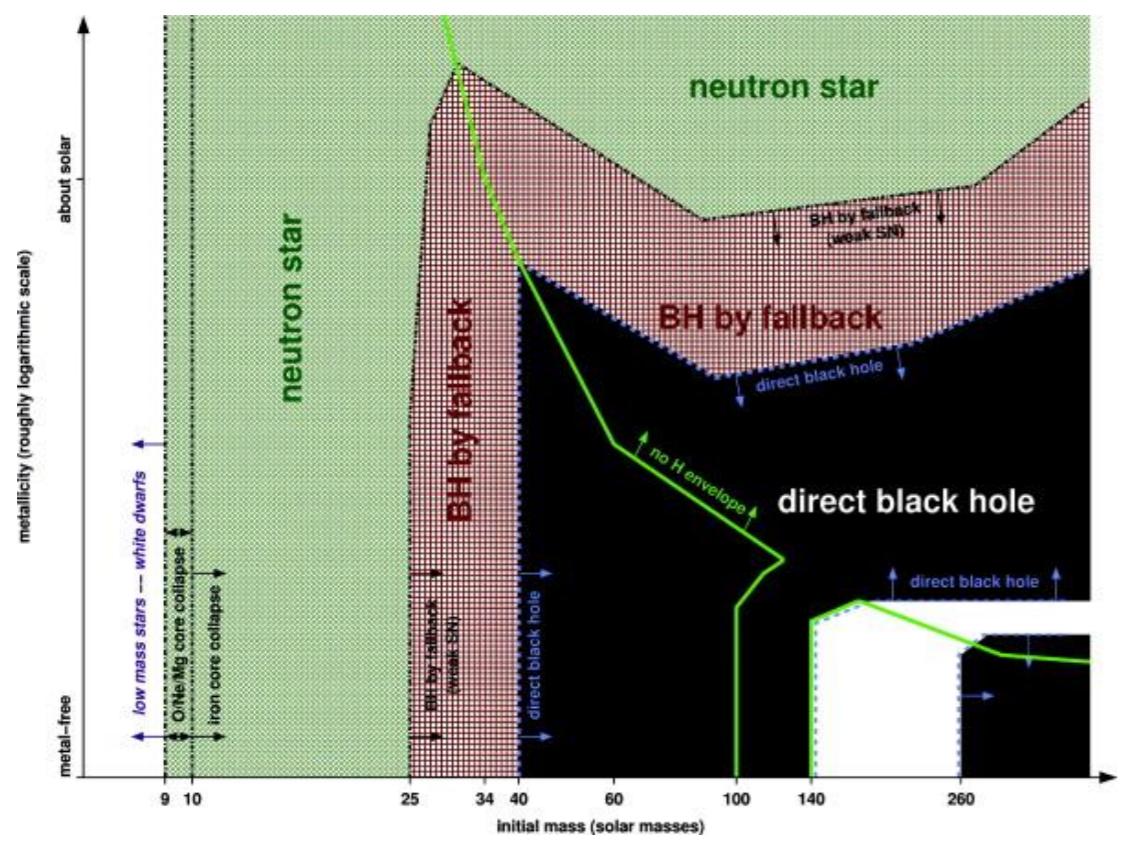 And from here there is a set of actual 1D simulations of the supernova 1987A showing all kinds of different outcomes for different masses and initial models of the star:
(Although 1D simulations tend to have a hard time to initialize explosions) 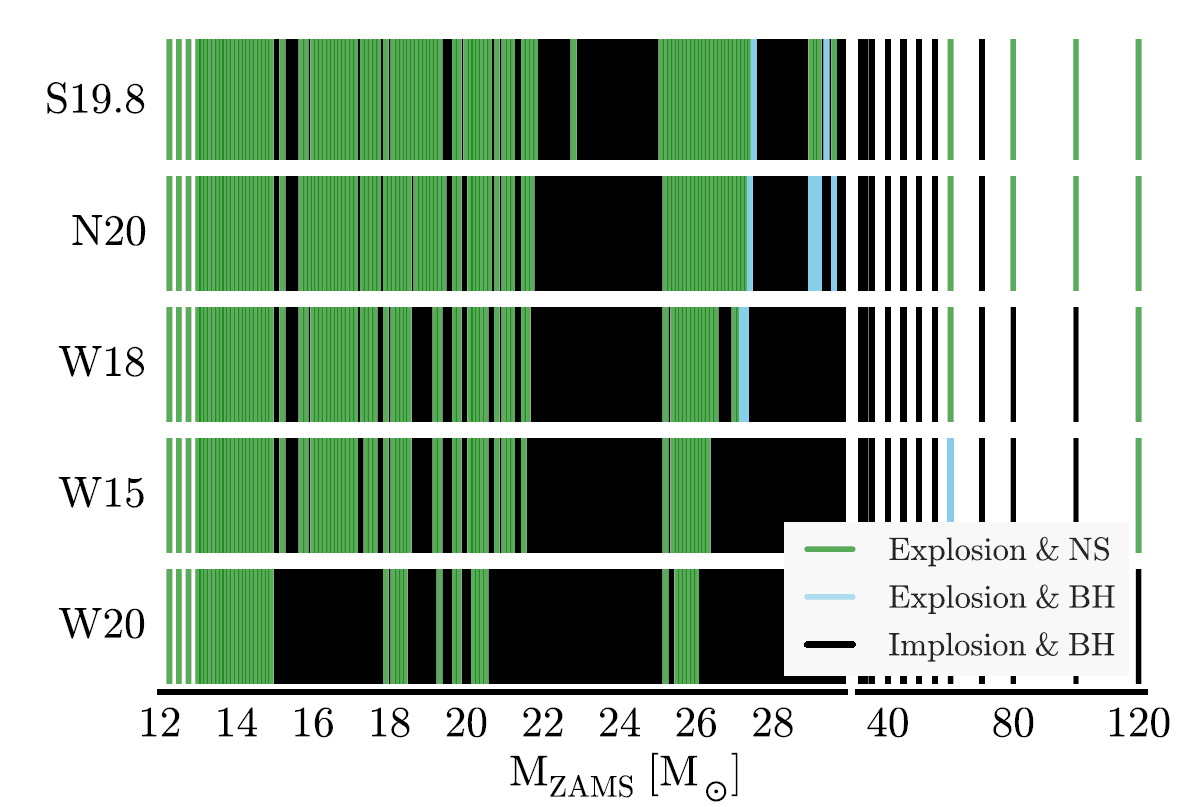 How complex these simulations are can also be seen in nice 3D videos like this one.

So you see, to determine which stars go through which final fate we have to torture huge supercomputers and even then we still have a hard time coming up with definitive answers.

Not the answer you're looking for? Browse other questions tagged star supernova neutron-star .

4
How massive does a main sequence star need to be to go type 1 supernova?

44
How does neutron star collapse into black hole?
4
How massive does a main sequence star need to be to go type 1 supernova?
5
Stellar mass limits for Neutron Star and Black Holes
2
How does a supernova occur when a massive star collapses into a black hole?
4
Can a star be massive enough to go 'supernova' yet not be massive enough to leave behind a neutron star? Or, perhaps vice versa?
1
Is the smaller companion of Pulsar J0453+1559 still the smallest known neutron star? Was it further confirmed to be a NS after Martinez et al. (2015)?
6
Do “neutrino supernovae” exist?