What would a terraformed Mars look like from Earth?

Question in the title. Currently, Mars is a small orange dot in the sky. But what if green, blue, and some white were added? I wouldn't expect it to be too different- a large portion of it will remain pretty much the way it was, but with more snow (Tharsis bulge is REALLY high up).

To terraform Mars, broadly speaking would make it more like an analogy of Earth. As you say, it might be a little colder, but we would expect a terraformed Mars to have oceans, snow and maybe some imported plant life.

How would Mars look from Earth? A good starting point would be to see it the opposite way around. Here is how Earth looks from Mars.

Like Earth from a distance, a terraformed Mars would likely appear as a pale blue or white dot. If you want more snow or ice than water, it would surely lean towards white rather than a deep blue.

Various aspects of the terraforming assumptions may nudge this up (more ice, extra light from solar mirrors) or down (less clouds? deliberate ice darkening?)

I pulled these pictures from Google. I hope it is enough to answer with pictures? 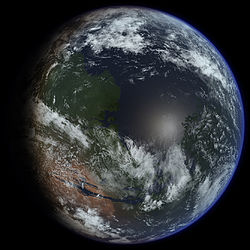 Not the answer you're looking for? Browse other questions tagged solar-system light mars .

9
Sunsets: Mars/Earth
9
What Would it Look Like Inside Jupiter's Great Red Spot?
7
Why isn't the moon orange all the time?
2
Mars and 115 mm - which eyepieces?
12
How would astronomical seeing on Mars differ from that on Earth?
4
I need help getting mars to look like a circle
3
Would drinking melted ice water from Mars taste like sparkling water?
1
Events I cannot explain