Would time go by infinitely fast when crossing the event horizon of a black hole?

If you were to fall into a black hole, my understanding is that from your reference point, time would speed up (looking out to the rest of the universe), approaching infinity when approaching the event horizon. If this is correct, would you see the whole universe's future "life" flash before your eyes as you fall in, assuming you could somehow withstand the tremendous forces, and assuming black holes don't evaporate? If it is correct that black holes evaporate due to Hawking radiation, would you be "transported" forward in time to where the black hole fully evaporates?

This also takes into account ideas discussed in: Why does time get slow near a black hole?

Note: This answer to another question provides some insight here too (refer to the last part of the answer): https://astronomy.stackexchange.com/a/3713/1386

(I will assume a Schwarzschild black hole for simplicity, but much of the following is morally the same for other black holes.)

If you were to fall into a black hole, my understanding is that from your reference point, time would speed up (looking out to the rest of the universe), approaching infinity when approaching the event horizon.

The conclusion is that if you have the rocket power to hover arbitrarily close to the horizon, you will be able to see arbitrarily far into the history of the universe over your lifetime. However, that doesn't actually cover what happens to an observer that crosses the horizon. In that case, $\mathrm{d}r\not=0$, and the coefficient of $\mathrm{d}r^2$ above becomes undefined at the horizon: as in the other question, the Schwarzschild coordinate chart simply fails to cover the horizon and so is ill-suited for talking about situations cross the horizon.

But that's a fault of the coordinate chart, not of spacetime. There are other coordinate charts that are better adapted to questions like that. For example, the two Eddington-Finkelstein charts are best suited for incoming and outgoing light rays, respectively, and the Gullstrand-Painlevé chart is adapted to a freely falling observer starting from rest at infinity.

If this is correct, would you see the whole universe's future "life" flash before your eyes as you fall in, assuming you could somehow withstand the tremendous forces, and assuming black holes don't evaporate?

No. I think this is best seen from the Penrose diagram of Schwarzschild spacetime: 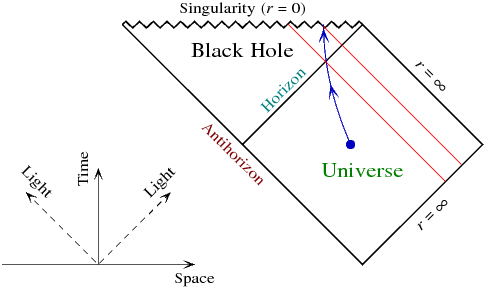 Light rays run diagonally. In blue is an example infalling trajectory, not necessarily freely falling. Note the two events where it crosses the horizon and where it reaches the singularity. Shown in red are inward light rays that intersect those events. Thus, the events that the infalling observer can see of the external universe consist of the region between those light rays and the horizon. The events occurring after that won't be seen because the the observer will have already reached the singularity by then.

Now suppose the observer tries a different trajectory after crossing the horizon, accelerating outward as much as possible in order to see more of the future history of the external universe. This will only work up to a point: the best the observer can do is hug the outgoing light ray (diagonally from lower-left to upper-right) as much as possible... but since the observer is not actually allowed to go at the speed of light, seeing all of the future of history will be impossible. The best the observer can do is to meet the singularity a bit more on the right of the diagram.

By the way, since the light ray worldlines have zero proper time, trying to do that will actually shorten the the observer's lifespan. If you're in a Schwarzschild black hole, you would live longer if you don't struggle to get out.

The above is for an eternal, non-evaporating black hole, as that's what you're asking about here. (The 'antihorizon' is there because the full Schwarzschild spacetime is actually an eternal black hole and its mirror image, a white hole in a mirror 'anti-verse', which not shown on this diagram. That's unphysical, but not relevant to the situation we're considering here.)

If it is correct that black holes evaporate due to Hawking radiation, would you be "transported" forward in time to where the black hole fully evaporates?

An evaporating black hole is morally the same as above: only an ideal light ray can reach the point when the black hole fully evaporates; everyone else gets the singularity. (Since this ideal light ray right along the horizon would be infinitely redshifted, arguably not even that.) You can repeat the above reasoning on its Penrose diagram yourself: 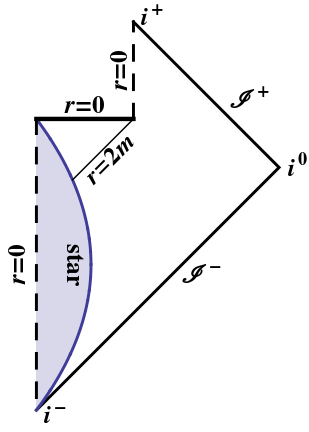 I have thought a bit about this, and does this solution take into account the relativistic time effects near the horizon of the black hole (e.g. is my understanding correct that the observer would observe time in the universe passing approaching infinitely fast when approaching the event horizon)?

How much time dilation happens depends entirely on what coordinates we're talking about (more generally, which frame field). What a given observer will actually see, however, is completely independent of choice of coordinates. In particular, Penrose diagrams illustrate the light cone structure of the given spacetime, and what an observer can in principle see depends entirely on what light rays intersect the observer's wordline. So yes, it's taken into account by default.

If you're actually falling in it, no, your understanding is mistaken, for reasons explained above. For additional motivation, flip the question around: what does the very distant stationary observer see of the infalling object? On the above Penrose diagram, outwardly directed light rays are diagonal, from lower-left to upper-right. Draw some some outward light rays from the blue infalling worldline. You will see that no matter how far into the far future (up on the diagram) you pick an event outside the black hole to be, you can connect that event with an outward light ray originating from the blue infalling worldline before it crosses the horizon. The conclusion would be that an observer that stays outside the black hole would be able to see the infalling object arbitrarily far into the future. No matter how much time passes for someone who stays out of the black hole, the image of the infalling object would still be visible as it was before it crossed the horizon. (In principle at least; in practice it will get too faint to see after a while.)

As you fall into the hole and if you could resist the differt pulls of gravity on your body the time for different body processes would have a different pace for all these processes. In other words, the particles of your body, in the freely falling frame, will experience different forces (giving rise to tidal forces in your body counteracted upon by electromagnetic force) and different passages of time. The deeper you are in the hole, the bigger those (relative) differences are.

The bigger the hole, the less you feel when falling in. But when you fall deeper the effectd will become apparent. You will feel an increasing tidal force and different parts of your body age at different rates. But it doesn't take long before you reach infinity. All your particles will be squeezed to smaller and smalker distances. For the two dimensional case, look at the particles falling into the 2D funnel. They travel to increasingly smaller parts of the "mouth" and they end up at infinity, stretched along the length of the long sqeezed cylinder inside and squeezed along the width of the cylinder. They will all 4en up at infinity. After a finite amount of time.

If the hole evaporates you will be frizen in time and you could see the universe as it is today.

But. When the hole evaporates you will be destroyed by incoming Hawking radiation. Like this your presence will be wiped out. As if you never existed.

You are correct, the universe you were leaving would seem to speed up and ultimately the whole history of the universe would occur as you cross the critical circumference and onwards to the point like singularity. Galaxy mergers would take place, other black holes would coalesce with yours and so on. The singularity you finally reach would in fact be one and the same with the singularity at the end of the universe. There is only one.

Regarding Hawking radiation, from the viewpoint of an outside observer, who would see you frozen in time (or at least the constituent matter and energy in your body) at or around the critical circumference, this may not actually take place. If matter is frozen by time dilation, there will be no quantum fluctuations taking place and nothing falling through the critical circumference into the black hole, therefore no Hawking radiation taking place. Looked at from the viewpoint of an infalling observer it will take a very short time to cross the critical circumference, therefore the significance of quantum fluctuations in this period of time would seem to be small.

Not the answer you're looking for? Browse other questions tagged black-hole gravity space-time special-relativity horizon or ask your own question.