How can a pre-main sequence star radiate more energy by gravitational contraction than a main-sequence star can by hydrogen fusion? 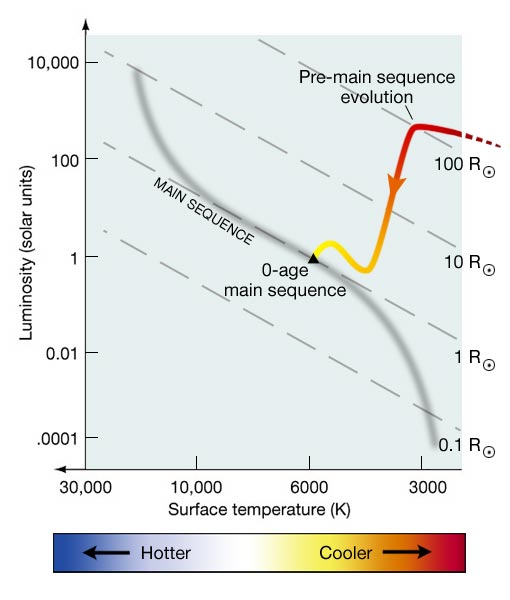 The luminosity of a PMS star is provided by the rate of change of gravitational potential energy as it contracts.

Since PMS stars contract along Hayashi tracks at almost constant effective temperature, their luminosities decrease considerably with time as their surface area diminishes. However, the virial theorem tells us, that the core temperature of the PMS star must increase, roughly as the reciprocal of the radius. Ultimately, this leads to the ignition of hydrogen, but the rate of nuclear burning only ramps up to be equivalent to the luminosity at that point. Therefore the luminosity of a main sequence star is generally$^1$ lower than during the majority of the PMS phase for a star of the same mass.

$^1$ This is not always true. There can be a brief phase of constant or slightly increasing luminosity just prior to hydrogen ignition that is caused by the development of a radiative core - called the Henyey track.

Not the answer you're looking for? Browse other questions tagged star star-formation protostar main-sequence .