Information speed and our view of the cosmos

It is common knowledge that when we look at the stars we look back in time. And most stars are thousands of lightyears away from each other. The information that photons cary about the position of a stellar object can be really deceiving about their true position.

Do astronomers take lightspeed into account when they map stars ? If so, how do they figure out the true position of a star.

With all that in mind do galaxies really look like what we see in our photographs? If a galaxy has a diameter of bilions of lightyears, what we see could be a really skewed and warped image of the real galaxy. Can we computationaly reverse the warping ?

EDIT Image 1 and 2 explain what I mean by "Warping". Stars closer to the core move faster and in combination with their distance from the viewer, information by light should give the impresion of a more "spiraly" galaxy as it whould take less time to reach the observer. Image 2 whould be the "true" shape of the galaxy if the effect could be reversed (I applied a counter clock-wise warp distortion)

An other factor of false position are gravitational lences. Although gravity from black holes do give the maximum distorsion, gravity from other stars could divert light reaching us. The diversion is negligent but can get big for astronomical distances (Image 3). Am I right ? If I am, do Astronomers even bother to make simulations to map the known sky as it whould be in real time ? 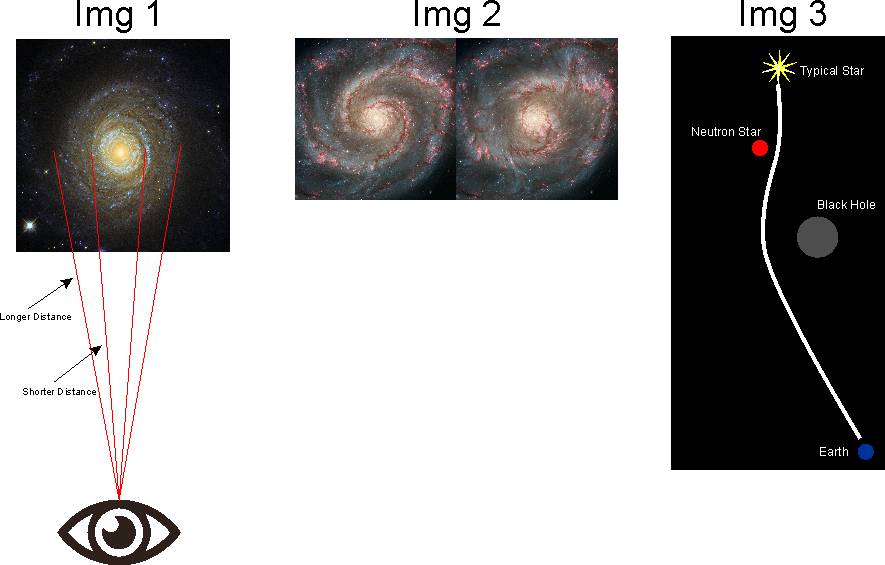 The effect is small, but not negligible. It is not accounted for in astronomical catalogues.

Let's work it out. We can start with the visible stars. Most of these are closer than 1000 light years; let's say 100 light years. The typical velocity of these stars with respect to the Sun is tens of km per second; let's take an extreme example of 100 km/s in a direction at right angles to the star-Sun line.

100 years at 100 km/s is 300 billion km. This sounds huge, but it is a tiny fraction of the size of the Galaxy and small compared with the distances between stars; but by how much does it change the apparent position in the sky? The change in angle (in radians) is given by the tangential distance moved in 100 years, divided by the distance to the star. This is the ratio of the speed of the star to the speed of light and is actually independent of distance.

For the example given, the change in position is $3.3\times 10^{-4}$ radians or 69 arcseconds. This is an enormous change in astronomical terms (not an angle you could easily resolve with the naked eye), but it is not accounted for in astronomical catalogues, since we are interested in where to look at stars now and neither do we know the accurate tangential velocity of everything in the sky.

What is accounted for in telescope pointing software is relativistic aberration, which is a change in the apparent position of a star due to changes in the relative motion as the Earth orbits the Sun. These corrections can be as large as 22 arcseconds.

As for galaxies - you have your dimension estimates wrong. A large galaxy is 100 thousand light years across, with stellar speeds limited to a few hundred km/s. I don't understand what you mean by "warping". Individual stars will have moved whilst the light travels towards us, others will have taken their place, stars will have died and others born, whole galaxies will have disintegrated or merged. All this is known. We can only observe what we can see now.

A dynamical timescale is typically tens of millions of years in a Galaxy and far longer than it takes light to travel across the galaxy. To all intents and purposes, when we look at a distant galaxy we are seeing everything at roughly the same epoch in that galaxy's history.

Not the answer you're looking for? Browse other questions tagged galaxy special-relativity or ask your own question.

2
What is the speed of light relative to (in space)?
4
How can a galaxy in-between our view and the galaxy behind it have a 'lensing effect'?
0
What are evidences of stationarity of rotation of galaxies
5
Is it possible to view the Andromeda galaxy with the naked eye in Greece?
4
What is the farthest blueshifted object to our galaxy?
2
Is it possible to know if you are travelling close to the speed of light if you have nothing to compare your speed with?
7
Could the Sun and our Solar System one day leave our galaxy?
3
Do some galaxies collide faster than the speed of light?