Does the Earth orbiting around the Earth-Moon barycenter cause a measurable centrifugal force?

I just realized the Earth is not a stationary object with the moon orbiting around it. As shown in this minimalist animation from Wikipedia, the Earth actually orbits a common barycenter with the moon. If this was a carnival ride, people sitting in the moon and on the far side of the earth would certainly feel the centrifugal force acting on them. 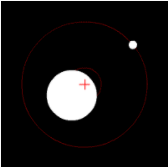 However, this is a very large system in reality, and the Earth also has quite a strong gravitational force felt on the surface anyway. So when it comes to accurately measuring gravity or doing experiments that rely on gravity, how big of a factor is this centrifugal force? Does the apearant force of gravity fluctuate from 9.9 m/s^2 to 9.7 or is it more along the lines of 9.800001 to 9.799999 (assuming the average is exactly 9.8, which is a simplification). Or is there something I'm missing that means the force is non-existent?

That the Earth and Moon orbit about their center of mass from the perspective of an inertial frame of reference is a bit irrelevant. One thing that is quite relevant is that gravitational force is undetectable by a local measuring device. For example, people standing still on the surface of the Earth do not feel gravity. They instead feel the normal force pushing them up, away from the center of the Earth. The gravitational force on astronauts in the International Space Station is about 90% of what they experience on the Earth's surface, but they feel none of that.

The difference between these accelerations results in a force that can be measured. This is the tidal acceleration. An extremely sensitive scale will show that you weigh slightly more when the Moon is on the horizon than when it is directly overhead. For a 61 kg person, this difference in weight between the Moon being on the horizon vs directly overhead is about 10-4 newtons.

Compared to the ~600 newton weight of that 61 kg person, this is a very small effect. This very small effect, along with an even smaller effect from the Sun (roughly half), are however responsible for the tides in the oceans.

The Earth and Moon are in orbit about each other, which means that the centrifugal (outward inertial) force $M_iV_i^2/d_i$ is balanced with the centripetal (real inward force), ie $GM_{\oplus}M_{\mathrm{Moon}}/(d_\oplus+d_{\mathrm{Moon}})^2$, where $d_\oplus$ is distance from Earth to Earth-Moon center of mass (c.m.) and $d_{\mathrm{Moon}}$ is the Moon's c.m. distance. Thus, most of the centrifugal force of the motion about the c.m. is canceled. Since we reside at one Earth radius from the center of the Earth, the cancellation is not exact, and the remainder is exactly what we call the Lunar Tide, i.e. the familiar tidal force of the Moon which causes most of the ocean tides (there is also a component from the orbit about the Sun).

The tidal acceleration is described in Wikipedia page.

Something interesting from Wikipedia:

Scale model of the Earth–Moon system: Sizes and distances are to scale. It represents the mean distance of the orbit and the mean radii of both bodies.

Not the answer you're looking for? Browse other questions tagged orbit tidal-forces or ask your own question.

14
What causes the antipodal bulge?

0
Does Earth revolves around Milky Way?
2
The tidal locking problem concerning Earth sized planets in habitable zone around Red Dwarfs
2
Has NASA confirmed earth now has a second moon orbiting the planet?
4
What is the orbital velocity of Pluto around the Pluto-Charon barycenter?
1
How is the average distance between 2 objects orbiting around a third object calculated?
3
Does the earth spiral around the sun's movement/motion path?
14
Has the Earth's wobble around the Earth-Moon barycenter ever been observed by a spacecraft?