Why is frequency different for gravitational waves coming from SMBHs vs small compact binaries? 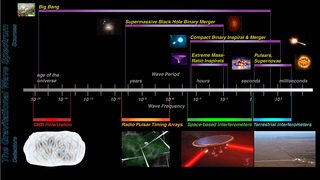 The reason for the upper limit is that gravitational force scales as the product of masses over separation squared and that the closest approach of black holes is limited by their event horizons. The lower limit is because the amplitude of the waves gets smaller and becomes undetectable at lower frequencies.

The frequency of gravitational waves is twice the orbital frequency.

The frequency of gravitational waves therefore depends on both the mass and separation of the binary system.

However, the maximum frequency occurs at closest approach, which for black holes is when their event horizons come into contact. The Schwarzschild radius is $2GfM/c^2$, where $f$ is the fraction of the system mass of each black hole. Thus the closest separation $a_{\rm min}$ is the sum of the Schwarzschild radii and is simply $2GM/c^2$, since $f_1+f_2=1$.

The lower limits to frequency are not really limits at all. The frequencies can be anything smaller than the maximum. However the amplitude of the gravitational waves depends on the acceleration of the masses, which in turn decreases as they become more widely separated. This effectively gives a window between where the waves become detectable and the maximum frequency.

Near coalescence, we still have an upper frequency bound, because the maximum frequency $f_{\text{max}}$ is proportional to $\sqrt{G\rho}$, where $\rho$ is some sort of density for the system. In the case of a black hole, $\rho\propto M/R^3$, and since the Schwarzschild radius $R_s\propto M$, we find that $f_{\text{max}}\propto\sqrt{M/M^3}=M^{-1}$. Therefore, the more massive the black hole, the lower the maximum orbital frequency. For supermassive black holes, this turns out to be in the nanohertz regime, give or take an order of magnitude.

Not the answer you're looking for? Browse other questions tagged black-hole supermassive-black-hole gravitational-waves or ask your own question.

10
From where does the energy for gravitational waves come from?
2
Binary pairings that haven't been discovered yet?
4
What produces gravitational waves with "periods between about 100 - 8000 seconds"?
19
Why can't supermassive black holes merge? (or can they?)
5
Expected nature of LISA's data; will it be more like a forest of static peaks, or a series of individual events?
2
Does this black hole mass/galaxy stellar mass relation hold for extremely low-mass galaxies?
13
Why do gravitational waves travel "only" at the speed of light but the gravitational scalar potential is instantaneous?