Jupiter is posited, in some models, to have a rocky core about the size of a few Earths. If we could see through the thick gaseous atmosphere, what topographical features might we find on the rocky core? I know that no probe has ever sent data from Jupiter's (hypothesized) solid surface, and that orbiters probably can't penetrate the clouds to produce a topographic map, but do we at least have any educated guesses as to what sort of surface features are and are not likely to exist? For example, given Jupiter's massive gravity, would the surface be extremely smooth? Or would it not be out of the question to observe things like impact craters or mountain ranges?

There's not going to be any surface features.

First of all, let's assume you could look through a thick soup of metallic hydrogen. This material has densities starting at that of water, going to the densities of solid rock and even above, while still remaining liquid.
On a sidenote: No space probe will ever be able to look into that mess. Only gravitational measurments will help.

In recent years, it has been shown that under such conditions typical minerals are thermodynamically not stable, and thus will dissolve into the hydrogen-helium mix.
Thus, the core will not have any well-defined boundary, but it's going to look more like the following sketch (emphasis on sketch!): 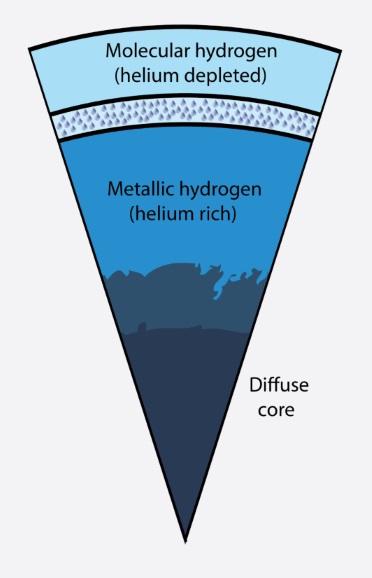 which I took from this author's website, which has also a lot of follow-up in-depth research material linked.

In short: Essentially any topographical features can be ruled out. That thing down there will be a liquefied, high-pressure mess.

It is of course correct to say that Jupiter might not even have a core, but to build a planet with 1 Jupiter mass and one Jupiter radius one usually requires a certain amount of high-Z material in the core, which is why the core-idea is very attractive.
Also, going around on conferences this year, it seems that JUNO does find a 5-25 Earth masses core, but there is no publication on this yet.

An answer to your question is not known at this time. From the Internal Structure section of Jupiter's Wikipedia page,

Jupiter is thought to consist of a dense core with a mixture of elements, a surrounding layer of liquid metallic hydrogen with some helium, and an outer layer predominantly of molecular hydrogen. Beyond this basic outline, there is still considerable uncertainty. The core is often described as rocky, but its detailed composition is unknown, as are the properties of materials at the temperatures and pressures of those depths (see below). In 1997, the existence of the core was suggested by gravitational measurements, indicating a mass of from 12 to 45 times that of Earth, or roughly 4%–14% of the total mass of Jupiter.

The idea that the core is "rocky" or composed of metallic hydrogen is still unknown. Determining more about this is one of the objectives of the Juno mission currently in orbit. We may obtain better models of Jupiter's internal structure in the coming years, but at this point we just don't know.

Not the answer you're looking for? Browse other questions tagged jupiter surface topographic-map or ask your own question.

12
What will happen when landing on Jupiter?
1
What does the surface of Mercury look like?
5
What Would it Look Like Inside Jupiter's Great Red Spot?
6
What colours can rocky planets (or moons) have
5
Does Ganymede have a day/night cycle? If so, what does it look like?
15
The compatibility of the Grand Tack hypothesis with the “core-warping impact” theory of Jupiter's diffuse core
4
What would Jupiter look like from a Galilean moon?
3
Surface height distribution for Jupiter's moon Io?