How would a planetary defence against comets work?

Mappings of practically all potentially dangerous asteroids is well underway. But comets seem almost hopeless to protect against.

They used several Mars and earth gravity assists to raise Rosetta's aphelion to around 5 AU. The comet's aphelion is also in that ball park. The comets from Jupiter's neighborhood (about 5 AU) are moving about 40 km/s when they're in our neck of the woods (earth moves about 30 km/s). A comet moving 40 km/s wrt the sun at 1 AU can be moving anywhere from 70 to 10 km/s wrt to the earth, depending on inclination. A head on collision would be 30 + 40. If the comet was moving the same direction as the earth, it'd be 40 - 30.

A comet from the Oort Cloud would also be moving a hair under escape velocity, 42 km/s in our neighborhood. But Aphelion would be much higher, up to 50,000 AU. Presumably many of the non-periodic comets are from the Oort. Click the comet links in this list and you can compare discovery date with last perihelion. For example Comet C/2011 W3 (Lovejoy) was discovered November 27, 2011 and it's .55 AU perihelion occurred December 16, 2011.

In JPL's description of the LINEAR NEO search program, they say "… with most of the efforts going into searching along the ecliptic plane where most NEOs would be expected. " But objects from the Oort don't tend to the ecliptic plane. In my opinion a high inclination comet from the Oort with our name might escape undetected until it was way too late to do anything about it. But an Oort comet with our name on it is very unlikely.

Q - How far away are approaching comets detected today? How long time before they would pass Earth orbit?

A - About 30AU's. That's the same distance as neptune.

Halley's comet, which is 70.56 km/s has been seen in 2003 at 28AU's away, near it's 35AU's aphelion, using three telescopes for multiple nights, Halley is 11km diameter and currently has apparent magnitude 28v.

Here is a graph of apparent magnitude of a 15 kilometer comet called 2015_ER61 over 3 years from 2014 to 2017, which was detected by PANSTARRS (Panoramic Survey Telescope and Rapid Response System). It passed 0.1AU's away from us. PANSTARRS also saw the 50m interstellar asteroid in November 2017 as it was travelling away. 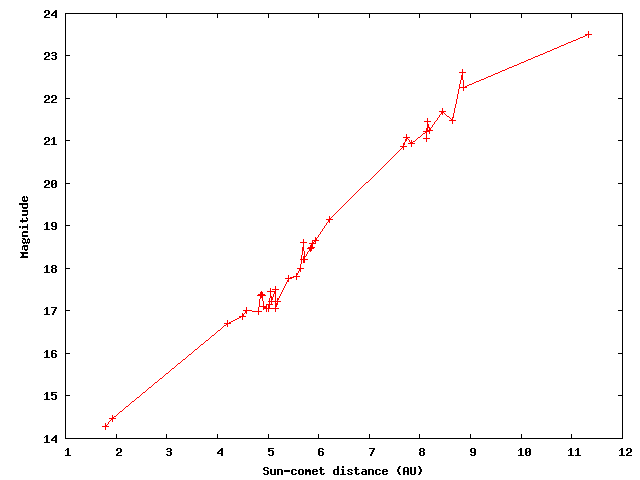 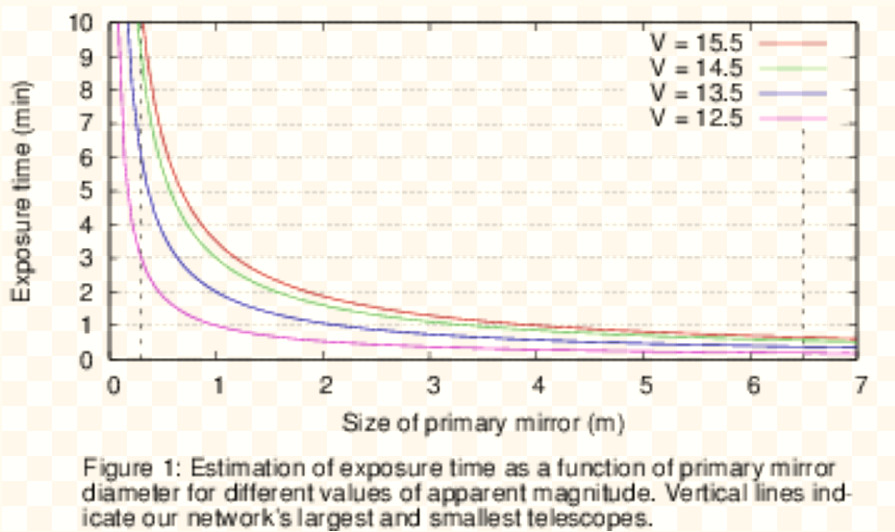 Exoplanets were rare when they were detected with apparatus similar to PANSTARRS, and then they launched Kepler to find more, and they have as of 1 December 2017, detected 3,710 planets in 2,780 systems.

The same will happen in the future with comets, especially for interstellar comets, which is like having material from many light years away arrive in the solar system.

The difficult task is approaching a 25KM/s comet at landing speeds.

Most of ESA's GAIA photography work is thrown away! When it could be used to detect comets! It discards most of it's CMOS data, including all the 1000ds of comets that it would have detected had it been designed differently.

The bottleneck in GAIA is how much data it can transmit back to our planet.

Here is a suggestion of a future mission which can possibly multiply our knowledge of comets and asteroids by 2 orders of magnitude, the suggested mission is called FAiRLiGHT based on our experience of processing large amounts of CMOS data for vectors.

100W of solar panels can supply a 10TB SSD type HDD in space.

10TB of SSD can keep a month's worth of space telescope observations on disk.

50W is also used for a serial CPU processor.

The CMOS data is kept in a virtual 3D or Voxel array inside the 10TB memory, with simple memory indexing that represents Pixel X, Y , Time values. (it's cubic memory, representing space as a 2D plane with a time variant)

That's mathematical simplicity. You keep super simple indexing for all the photos in the momory, so that the processor requires nearly zero instructions in order to read, write and recall memory very fast.

It's a comet/asteroid reconnaissance mission that is essentially keeping all the GAIA photos in large memory banks and running a processor on 10 million pixels per second searching for shooting-star type signals across multiple photos.

The clearest vectors/comets are then sent back to earth, which results in a thousand fold compression of the original CMOS files.

They will be able to use Bi-focal and Tri-focal versions of GAIA telescope, which then triangulate exact positions for comets.

The vogue has recently been about algorythms to study peaks in stallar brightness which describe exoplanets, and if material from other stars can be detected more efficiently like exoplanets were, for example by using satellite based bifocal vector processing engines, vector processing will perhaps become a well studied field and comets and interstellar meteorites will be seen frequently and with precision.

Not the answer you're looking for? Browse other questions tagged comets impact or ask your own question.

12
Long term development of Comets
5
What known comets are binary?
1
How near to Earth do comets pass?
8
How big do comets get?
0
safeguards against comets?
7
Does Jupiter help to protect the Earth against comets/asteroids impacts?
3
extrasolar comets - basic question
0
Would a direct hit by a small comet be catastrophic?
9
How do comets' nuclei stick together?
3
I have a question about the wording in a paper about a planetary system and comets