Mercury's surface was not mapped up-close until Mariner 10 passed by in 1974. This was followed by MESSENGER in 2008. I have seen several attempts of mapping Mars that came before space exploration, such as Schiaparelli's maps from 1877.

With regards to Mercury, were there any documented attempts to map its surface with ground-based observations prior to unmanned space exploration? If so, however unlikely, did any observed features from Earth match up with Mariner or MESSENGER close-ups?

It's very hard to see anything on the surface of Mercury. It is always seen against the glare of the sun. It is always low in the sky, so we see it through a lot of atmospheres, the seeing is worse than it would be for an object higher in the sky. With CCD imaging technology you can see some details, by taking very short exposures and combining them(source). You can't do that with conventional photographic plates.

Lowell produced a map at the start of the century showing supposed linear markings that he thought were the result of cooling.

The best that could be done in the middle of the twentieth century, direct observation images from the Pic du Midi telescope 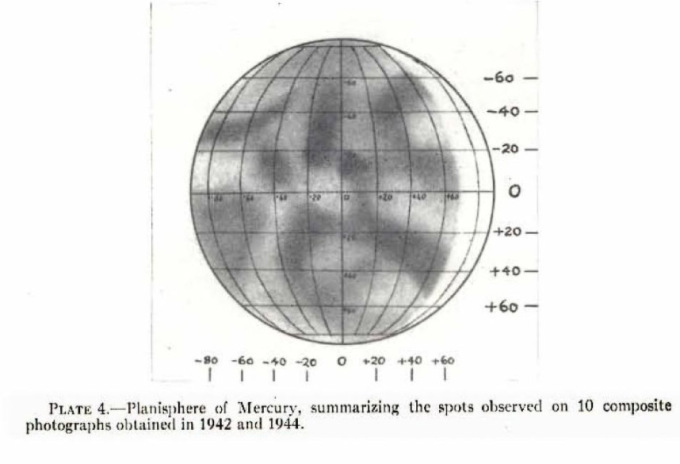 It wasn't until radar-based observations in the 60s that the rotational period was established. There were some mapping attempts at mapping in the 70s https://www.sciencedirect.com/science/article/pii/0019103572900231 (behind paywall)

11
Motion of the sun as observed from mercury
1
Delta-v from Mercury surface to Venus surface
4
How large was Mercury before it shrunk?
2
Orbit of Mercury
32
Why doesn’t the Sun fill the sky on Mercury?
11
Are there auroras on Mercury?
2
What is the highest point on Mercury?
4
What are those long, smooth, longitudinally-opposing areas from pole to pole on Mercury?