How significant are the recent results that Scholz’s Star has perturbed several observed hyperbolic objects?

The Gizmodo article A Visiting Star Jostled Our Solar System 70,000 Years Ago refers to the the three year old ApJ. paper The Closest Known Flyby of a Star to the Solar System (also arXiv) which describes Scholz’s Star and it's pass close to our solar system about 70,000 years ago.

The Gizmodo article then discusses the newly published paper in MNRAS Where the Solar system meets the solar neighbourhood: patterns in the distribution of radiants of observed hyperbolic minor bodies. However, while I can access the earlier paper, the new result is paywalled and I'm not able to access it (at least not soon).

The second half of the abstract in particular is confusing me.

Here, we perform a systematic numerical exploration of the past orbital evolution of known hyperbolic minor bodies using a full N-body approach and statistical analyses to study their radiants. Our results confirm the theoretical expectations that strong anisotropies are present in the data. We also identify a statistically significant overdensity of high-speed radiants towards the constellation of Gemini that could be due to the closest and most recent known fly-by of a star to the Solar system, that of the so-called Scholz's star. In addition to and besides 1I/2017 U1 (‘Oumuamua), we single out eight candidate interstellar comets based on their radiants’ velocities.

But my main question is simply how "statistically significant" is this result in reference to the enhancement in the direction of Gemini? I can't see the data. Is it just a tiny fluctuation, or a fairly obvious and robust feature?

A screen shot of the data would be most welcomed!

Not an answer, but just on radiants: 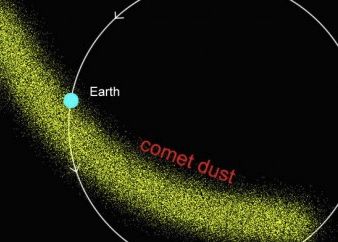 astronomers looked for the radiant it seemed to originate from. Calculations determined that A/2017 U1 came from a radiant located close to (R.A. = 18h 41m 25s ; Dec=+34° 15′) coordinates, which is near the actual position of Vega

exo-solar objects approach the solar system in a mostly straight line until they get close enough for the sun to bend their path. Where they came from before their direction was curved by the sun's gravity is their radiant.

Not the answer you're looking for? Browse other questions tagged asteroids comets .

4
How to calculate the position of a meteor shower's radiant point based on its associated comet's orbit?

9
Do astronomers generally agree that the distinction between comets and asteroids is not so clear?
3
Why are these objects moving at Vastly Different Speeds along the same orbit?
2
Do objects that are invisible to the naked eye occlude much of the stars to Earth based observers?
2
Any results from the probe that has been crashed into an asteroid once?