Bright light in the sky, in the '90s, what could it have been?

I can't confirm when it was any more exactly than that, unfortunately, as we were walking near my friends house at night in the summer, as we did hundreds of times in those years.

According to Wikipedia, the first naked-eye brightness gamma ray burst happened in 2008, so I imagine that's not it.

What could it have been?

Gamma ray bursts are very rarely bright enough in visible light to be seen with the naked eye. This is why they weren't detected until there was a network of satellites looking for atom bombs. You didn't see a GRB.

If what you saw was Bright, and Fast it was likely to be a bright meteor, sometimes called a fireball. These appear as a very bright, fast-moving "shooting star". They are rare, but not so rare that it would be possible to identify a particular event from the information that you give.

A reflection from a satellite can look like a star that brightens and then fades. The Iridium satellites are well known for this though other satellites can also produce "flares". Iridium flares have been visible since the late 90s.

There are other mundane possibilities, but these would seem to be the most likely. Remember memory is a funny thing. After 20+ years thing that you "remember" might be different.

If what you saw occurred within an hour or so of dawn or dusk, then it sounds like an Iridium flare. This is reflected sunlight off the large, reflective panel-like antennas of one of the Iridium communication satellites. Some of these can be particularly impressive, becoming much brighter than Venus over a few seconds and then smoothly fading away again on a similar timescale.

The link I posted above gives you instructions for how to observe one again if you wish to confirm that this is indeed what you saw, though your opportunity to do so may cease by the end of this year.

The picture below appeared in the "Sky at Night" magazine and was taken by Nikki Young.

However, these satellites first appeared in the sky in the late 90s (1997), so perhaps you saw glints/flares from something else before then, but these would not have been as bright. 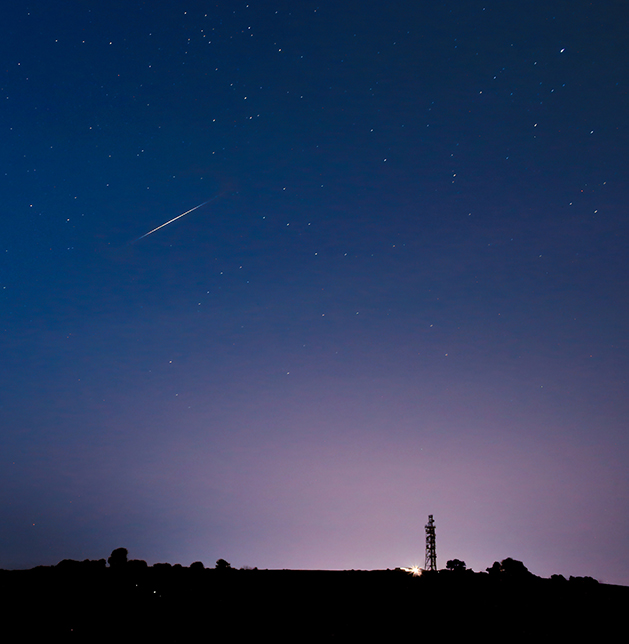 Not the answer you're looking for? Browse other questions tagged amateur-observing light or ask your own question.

3
Can my Sky Watcher Infinity 76P “make the sky bright” & do I want it to?
3
I've seen some stars tonight. What could I possibly have been looking at with these pictures?