How can we detect water on Mars-like exoplanets?

According to data from Curiosity, Mars' dust holds about 2% water by weight

This wasn't previously detected, so the impression we have had of Mars being incredibly dry may need to be altered. Okay it is still very dry, but there is potentially extractable water in amounts usable by colonists.

It would be difficult to detect the water-by-weight in the dust of another planet to the precision that has been done for the Martian soil.

To confirm that the clouds are water clouds, not something the iron-vapour etc, according to web article "Hunting for Water on ExoPlanets" (bolding mine),

Using ESO’s Very Large Telescope (VLT), a team of astronomers have been able to detect the telltale spectral fingerprint of water molecules in the atmosphere of a planet in orbit around another star. The discovery endorses a new technique that will let astronomers efficiently search for water on hundreds of worlds without the need for space-based telescopes.

How can we detect water ... without actually going to the surface and heating up the local dirt?

The Hubble Space Telescope can detect water from 111 light-years away on the planet K2-18 b. The spectrum is detected when the planet passes in front of its sun, the results are analyzed to determine the composition.

"... Here, we report the detection of a spectroscopic signature of water in the atmosphere of K2-18 b — a planet of eight Earth masses in the habitable zone of an M dwarf$[7]$ — with high statistical confidence (Atmospheric Detectability Index$[5]$ = 5.0, ~3.6σ (refs. $[8,9]$)). In addition, the derived mean molecular weight suggests an atmosphere still containing some hydrogen. The observations were recorded with the Hubble Space Telescope/Wide Field Camera 3 and analysed with our dedicated, publicly available, algorithms$[5,9]$.

This marks the first atmosphere detected around a habitable-zone super-Earth with such a high level of confidence. Although the $\ce{H2O}\ce{+H2-He}$ case appears to be the most favourable, this preference is not statistically significant. Concerning the composition, retrieval models confirm the presence of water vapour in the atmosphere of K2-18 b in all of the cases studied with high statistical significance. However, it is not possible to constrain either its abundance or the mean molecular weight of the atmosphere. For the $\ce{H2O}\ce{+H2-He}$ case, we found the abundance of $\ce{H2O}$ to be between 50% and 20%, while for the other two cases, it was between 0.01% and 12.5%. The atmospheric mean molecular weight can be between 5.8 AMU and 11.5 AMU in the $\ce{H2O}\ce{+H2-He}$ case, and between 2.3 AMU and 7.8 AMU for the other cases. These results indicate that a non-negligible fraction of the atmosphere is still made of $\ce{H2-He}$.". 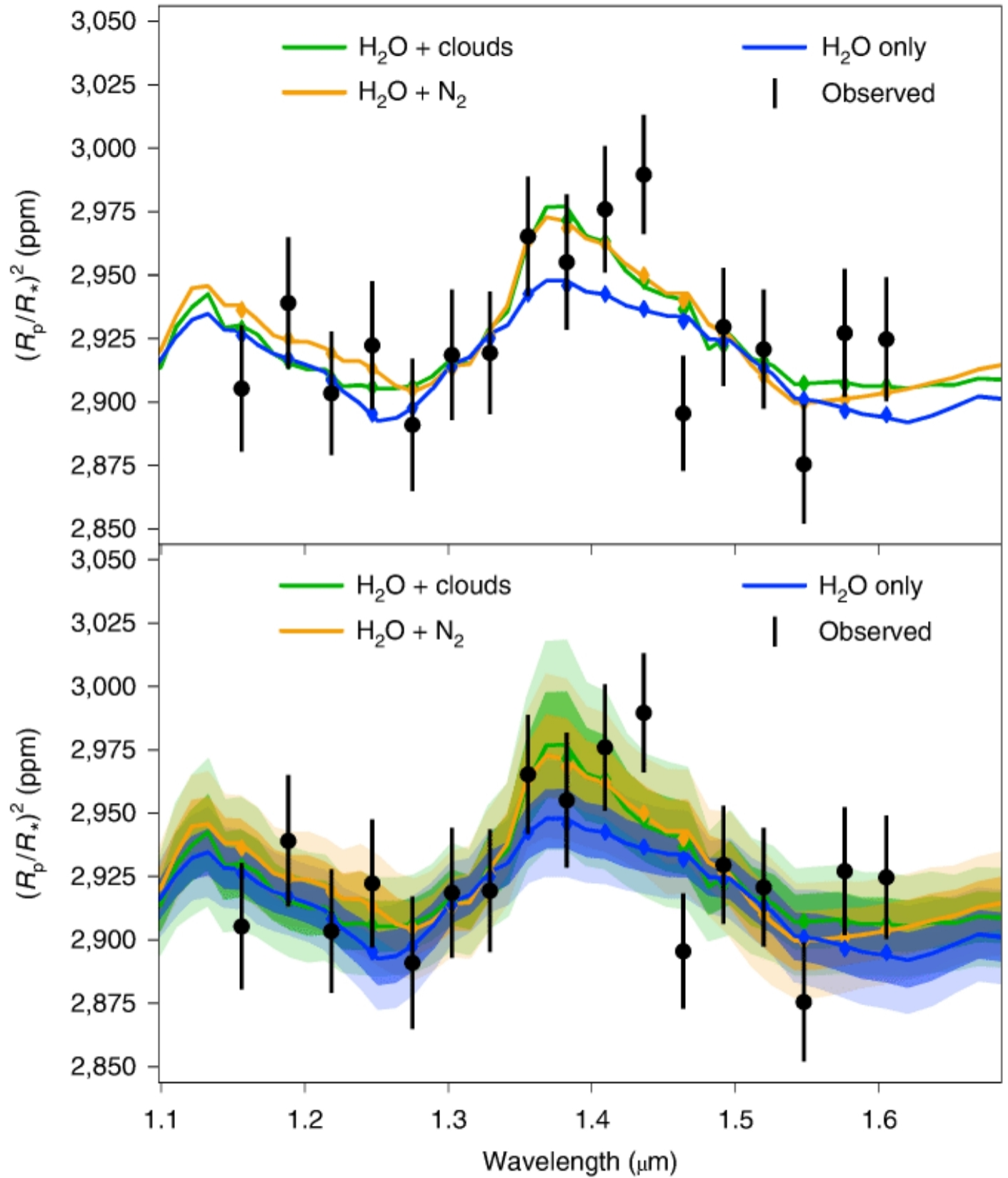 Not the answer you're looking for? Browse other questions tagged water or ask your own question.

14
Where did Mars' water go?
4
Why can't we detect water on Mars in the same way as in exoplanets?
4
Does liquid water on Mars means life?
4
How was water formed?
11
Can Liquid Water exist on Mars?
3
Would drinking melted ice water from Mars taste like sparkling water?
1
What are the most recent minerals modified by water found to date on Mars?
2
Are ocean water planets at Mars' atmospheric pressure possible?