How can a red giant grow so big?

Supposedly when the sun becomes a red giant, it will grow big enough to swallow Earth.

However, this requires the radius of the sun to expand by a factor of approximately 215×, meaning its volume would have to expand 10,000,000×.

Maybe it's just me, but something about this doesn't feel intuitive :-) especially given that the sun isn't gaining much mass. Exactly what about fusing elements heavier than hydrogen implies that the reactants and/or products take up 10,000,000× as much volume? Nobody ever explains this when explaining the stellar lifetime, and I don't understand why it should be the case. (In fact, I would have expected fusion to result in a decrease in volume, given that nuclei are combining...)

It seems there are 2 types of red giants, some that occur during hydrogen fusion, some helium.
If the answer is different for these two types, I'd at least like to know the answer for the helium type (though of course I'd appreciate one that goes further and addresses both).

In my mind, none of these explanations really cover the actual reason that red giants expand. Indeed, this subject seems like an area where people just make up anything that sounds plausible, but it's often quite wrong (Fraser Cain mentions both light pressure and a higher volume in the fusing shell, but light pressure plays no role at all, and the volume of the shell isn't much different than the core, which is way smaller than the Sun's core). So let's get the story straight.

Many of the descriptions do include some of the key elements, including the fact that you have a shell of hydrogen fusion going on atop an inert degenerate helium core. But the key reason for the expansion is that the way this shell self-regulates its fusion rate is quite a bit different from the way the Sun's core is self-regulating its fusion now.

Now, the Sun's core self-regulates its fusion rate to match the rate that energy (in the form of light) is diffusing out through the mass of the Sun. The way it does this is essentially the same in all main-sequence stars: they regulate their core temperature, which is why the core temperature of more luminous main-sequence stars is a little higher. But this is not at all the way the shell fusing in a red giant self-regulates its fusion rate-- it cannot regulate its temperature, because the temperature is handed to it by the gravity of the degenerate core its sits upon. (This sets the temperature via the virial theorem, that is the key way the degenerate core affects the shell-- it sets its temperature.) Since the shell doesn't regulate its own temperature, the temperature tends to be quite high, especially as the core gains mass (this is why the luminosity rises with time). Fusion is very sensitive to temperature, so being stuck with a very high temperature makes the fusion rate go berserk. The rest of the star cannot support this spectacular fusion rate, so something else happens.

The star puffs out, and in so doing, we find the way the shell regulates its own fusion rate: it lifts weight off the shell. That reduces the pressure in the shell, which compensates for the high temperature and brings the fusion rate down to what the rest of the star can manage (which is set by the rate light can diffuse through the shell). So there's the real reason-- the star must find a way to lift weight off its crazy-high-temperature shell to keep the fusion rate from going nuts, but the upshot is that the fusion rate is still pretty high, and gets higher as the mass of the core rises, forcing the shell temperature up ever more and forcing the star to puff out even more.

There's a nice description here. Remember that a star is made of gas (well plasma if you want to be picky), so it doesn't have a fixed volume. Once fusion starts a star will expand until it reaches a size where it can balance the amount of energy being produced by fusion with the amount radiated away from the surface. If it's too small, it will heat up, causing expansion which (depending on which parts of the star are expanding) will reduce the energy produced and increase the amount radiated away. A more detailed understanding of this requires keeping track of how temperature and density vary with depth in the star.

I found a description with only moderate amounts of maths especially around page 132. So one thing is that you have a helium core, with hydrogen fusion going on just outside it. That means there is less mass "above" the fusion layer, so fusion is actually happening at lower pressures than when it was happening in the core. That requires higher temperatures in that layer, and when you do the equations, a much higher total energy output. That flow of energy, whether as radiation or convection reaches the outer layers of the star, and initially heats them up, causing them to expand (since the stars gravity is more or less unchanged and so cannot pull them down any harder). In expanding, they cool, which means they trap radiation more (colder gas is less transparent) and radiate away less, and they are heated again and expand again. This continues until a balance point is found (or not, for stars much bigger than the sun which can blow off much of their mass this way) and when you do the numbers it turns out that this balance requires a very large star. Perhaps one way of thinking of it is that a star much less massive than the sun just slowly goes out. A star much more massive than the sub explodes. The Sun is poised between the two, so it "nearly explodes" but stops when it's outer layers have become very large.

One additional remark is that the density in the upper parts of a red giant is pretty low -- by our standards it's a decent vacuum, contaminated with red-hot gas. However because the star is so big, it is still opaque, so we count that as part of the star.

The size of star in equilibrium is a balance of forces, the pressure produced by the hot plasma, heated by the nuclear reactions in the core, balanced by gravity.

Fusion rates are strongly affected by temperature. Increase the temperature a little and you get a lot more energy coming out. As the core runs out of hydrogen, it begins to collapse and heat up, forming an inert degenerate helium core surrounded by a shell of rapidly burning hydrogen. At this new equilibrium a lot more energy is released. This positive feedback means that what seems like a small change (core to shell burning) has a massive effect on the energy output of the star.

Now this does cause the star to increase in size, but as the star gets larger, the outer layers are further from the centre of gravity, and so the force of gravity on them is reduced, in accordance with the inverse square law. With less gravity the growth in the size is amplified. So a large increase in power becomes a massive increase in size. This is why the growth in size is so much larger than simple intuition about the expansion of hot gas would predict.

In the final stages of a star's evolution, the size of the star grows without limit, as the star's gravity is not sufficient to keep its outer layers bound to the star, and it becomes a planetary nebula.

The intuitive way to think about it is to understand that there are multiple changes that, in essence, amplify each other. Amplification in astronomy isn't all that uncommon. It explains why gravity can make massive objects so small, because as the massive object gets smaller, the gravitation and weight of the object grows exponentially. In a sense, the opposite happens with a Red giant. The gravity at the surface grows low enough that the star kind of enters a run-away expansion.

The expansion of the star late in it's life is exponential. That's why it can expand so much.

In this theoretical, they hydrogen atoms on the surface are moving slightly slower, but with 1/4 the gravity, they're more free and they can move further from the star based on their thermal velocity.

If we keep expanding the sun, there comes a point where the outer hydrogen becomes incredibly loosely bound. At red-giant size, say, 1 AU in radius or 215 current solar radii, the gravity is some 46,000 times lower and the hydrogen on the surface only experiences 0.006 m/s^2 gravitational acceleration, but those same hydrogen molecules at red giant temperature (some 3,000 degrees K), are moving about 5.5 km/s. They can fly away from the surface for over a million km based on their thermal energy alone, compared to about 100 km at the surface of the sun currently (based on just under 8 km/s).

In both cases, the outer layer of hydrogen and helium are in equilibrium, it's just that the gravity and red-giant size is so so so much lower that with the red-giant, equilibrium is this very loosely bound very disburse hot gas. But that's only part of the reason.

Consider what else happens as the sun grows older. 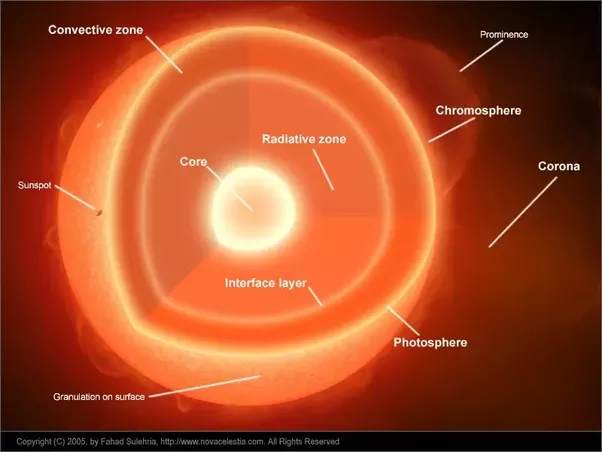 The core, where the fusion happens is a comparatively small region in the center. Wrapped around the core is the radiative zone and the conductive zone. which help keep the heat from fusion trapped inside the sun. As a result, over time, the inside of the sun grows hotter and as it grows hotter the core grows larger and it encompasses more and more of the radiative zone.

If we think of the radiative zone as a kind of blanket that traps heat inside the sun, as the core grows larger and more massive, the radiative zone is both stretched and it loses mass to the core, so it becomes thinner in two ways. If the size of the core is doubled, the photons from the core have to travel through 1/4th as many molecules. As the sun gets old enough and most of the fusion happens on the outer edge of the core, there's significantly less of a blanket to keep the heat trapped in. It's not so much that more energy is being created, it's that that energy has an easier path to the outer region of the sun. So you have an amplification effect, as the sun grows larger, the surface gravity drops by the square of the radius and the internal heat has less material to pass through to reach the outer layers, creating an outward pressure as well as delivering more heat.

The internal core collapse can play a role too. Even as the inner core runs out of hydrogen to fuse and it begins to collapse, the act of collapsing generates significant heat.

Not sure that's clear, but that's my attempt to explain what happens intuitively.

Not the answer you're looking for? Browse other questions tagged star red-giant or ask your own question.

17
Why do stars become red giants?
1
Star class according to initial mass
5
Why is the core of a gas giant supported by electron degeneracy pressure instead of nuclear fusion?
7
Why does lithium fuse at lower temperatures than hydrogen?
3
When exactly does a sub giant become a red giant?
15
Does a star fuse helium to beryllium on the main sequence?
8
How fast will the sun grow when it becomes a red giant?
0
Is there a theoretical minimum mass main sequence star that can become a red giant?