In a planetary system close to the galactic core, would it be possible to see the supermassive black hole?

I understand that radiation on planets near the galaxy’s center make life on these planets nearly impossible, and that one cannot truly “see” a black hole. However, if you could stand on the surface of a planet that orbits a star close to or within the galactic core, could you theoretically look up at the sky and see an absence of light/stars indicating the location of the central supermassive black hole?

Would it be too far away to see, obstructed by debris, or too small to notice?

If the black hole is active, meaning it is still capturing matter from its surrounding, it will have a large accretion disk all around, which is the only way to dissipate angular momentum for the matter falling into it.

As a result of this dissipation all the matter will warm up and emit radiation. This disc will be fairly large and thus clearly visible as a bright object in the sky.

This page shows an image captured by Hubble of such a disk: 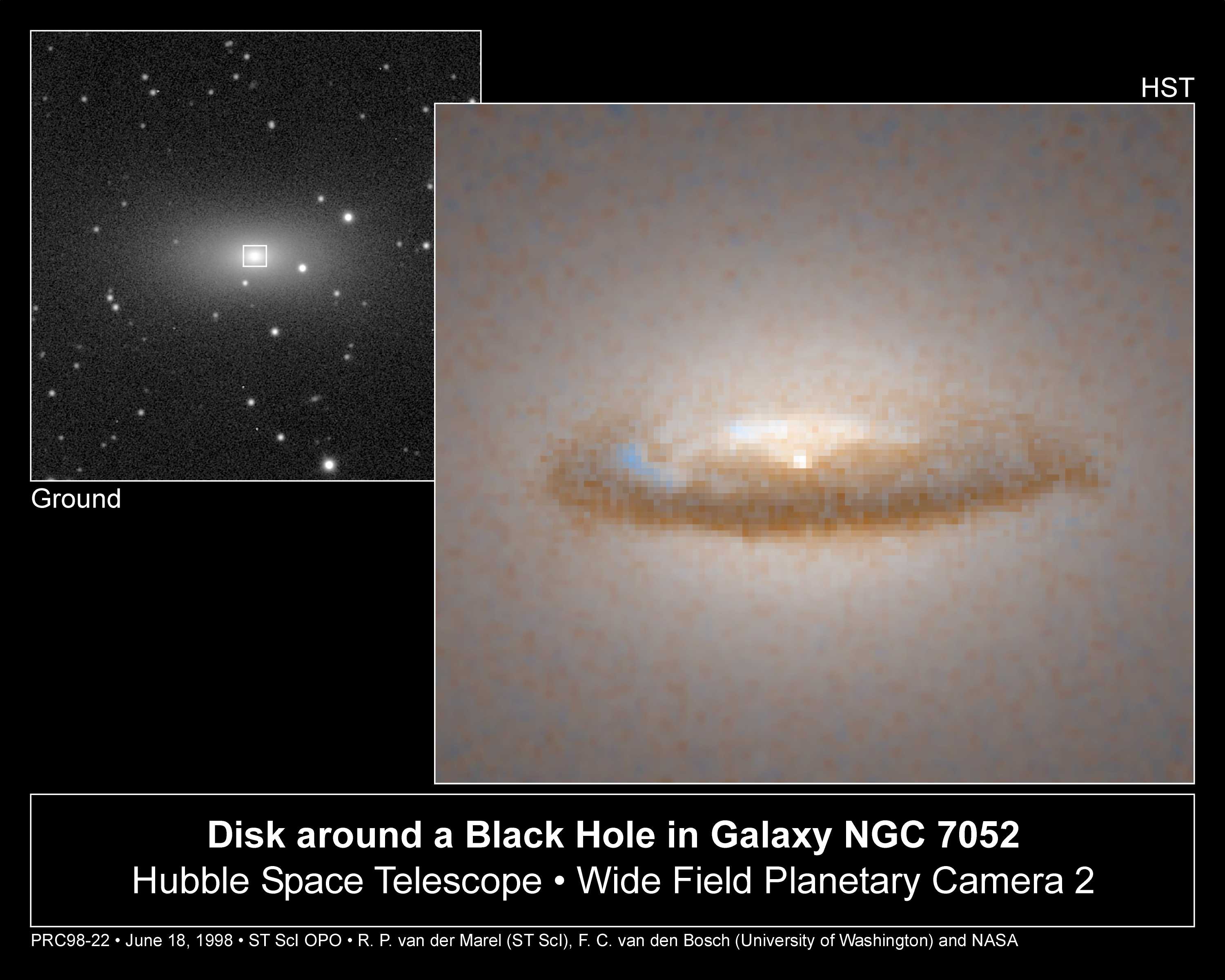 Strictly speaking then, one cannot see directly the black hole, as its view will be covered by the bright emission of the disk.

However, the presence of the disk will allow to observe the black hole thanks to its gravitational effect.

You couldn't see it as a black patch in the sky, because it's far too small. It's only 17 times the radius of our sun, which of course you can't see as a disc even from the outer reaches of our own solar system. What you could easily see is the much larger area of light and other radiation from matter falling into it.

There's a thing called gravitational lensing, which means that light coming from behind the black hole would bend towards it, and since the galactic core has a lot of stars, it might be that instead of a black spot in the sky, you'd see a great accumulation of light in and around the black hole's position.

I'm not sure how literal "lensing" is, so I don't know whether there is a focal point based on gravity and the energy of the light and whether it would matter where the planet is from this focal point.

http://www.cfhtlens.org/public/what-gravitational-lensing (google will provide more links if you search for it)

A source of radiation from black holes is stuff spiralling into the black hole, heating up as it "fell" and released its gravitational potential energy. Again this is black body radiation but this time the regular kind: the hotter the emitters are is the shorter the wavelength. This radiation comes from next to the black hole, not out of the hole itself.

The X-rays come from hot gas orbiting around the black hole in an accretion disk. As the gas orbits, magnetic stresses cause it to lose energy and angular momentum, thus spiralling slowly in towards the black hole. The orbital energy is transformed into thermal energy, heating up the gas to millions of degrees, so it then emits blackbody radiation in the X-ray band.

Once the gas gets closer than a few times the horizon radius, it plunges into the black hole, so while some X-rays can still escape just before the horizon, most are emitted a fair bit outside.

Telescopes to detect black holes look for the most energetic rays, which are emitted from the hottest areas of gas nearest the hole. We cannot stand on a planet and look up and see xrays. But consider: if there is very hot gas, next to it there is less hot gas, and next to that gas that is less less hot. The cooler a blackbody is, the longer wavelength the emitted radiation is. Somewhere in that progressively cooler cloud is gas which emits radiation in the visible wavelength.

I here assert that the gradual change in temperature of this cloud as it is progressively farther from the hottest innermost gas should produce a gradual change in the frequencies emitted. The first visible light would be in the far violet, nearest the hole. This will grade through blues and greens farther away and then to red at the farthest coolest part of the cloud.

This prediction should be true not just for black holes, but for any cloud of gas heated from within. Now let me look... here we go. 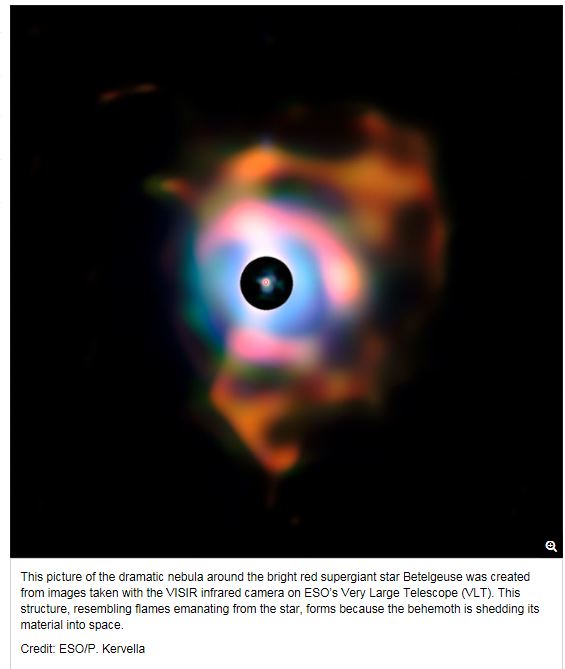 The black hole rainbow cloud will be more symmetric than this one. The star is spewing this stuff out willy-nilly but the hole is sucking gas in, so it will be a symmetric spiral.

6
The defintion of star/planetary/solar system
0
If you're near a black hole and your time is slowed down, would a supernova be observable to both you and someone outside of the blackhole's pull?
0
If a black hole pulls every object in the universe, why there is a light around it?