What does the angle between plane of earth's orbit and ecliptic vary between?

What does the angle between the plane of the earth's orbit and the ecliptic (now about 23.5 degrees) vary between, and over what time scale?

By definition, it is zero; the ecliptic is the plane of earth's orbit (or rather, the inverse: the path the Sun seems to follow along the sky).

But you're probably looking for variations in the axial tilt of the Earth. There's a lot of formulas in the article, and on the (astronomically speaking) short timescale of a few million years, it oscillates between 22 and 24.5 degrees with a period of about 41,000 years. See the graph below, the red dot is the year 2000: 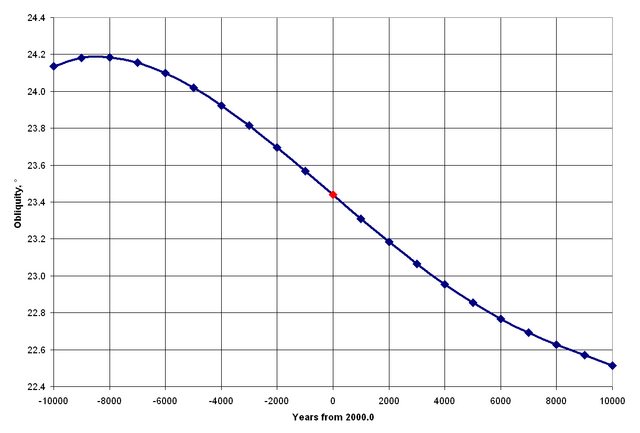 Not the answer you're looking for? Browse other questions tagged orbit earth or ask your own question.

7
What is the angle between the equator of the sun, and the plane of the Earth's orbit
6
Ambiguity in Earth's "Tilt"
9
Why do Uranus' and Pluto's moons orbit the equator? What makes a moons' inclination tilt with the rotational axis of their planet?
1
Day/Night Cycles and Seasons if the Earth's Rotational Axis and Orbit Changed
3
What does it mean that the Sun`s rotation axis is: RA 286.13° , Dekl: 63.87°?