Impact of inclined orbit satellite on a planet

If a satellite in an inclined orbit breaks up in orbit and multiple fragments hit a planet, do the individual fragments follow 1 a sinusoidal path 2 a geodesic ( or great circle curve) 3 a straight line I'm having real problems trying to visualise this! I realise the ground track of an inclined orbit follows a sinusoidal path but what happens when impacting a rotating planet?

Your main misconception is that satellites follow a sinusoidal path. That is just a distortion of the map.

The path of the satellite is in a single plane. When that plane meets the Earth produces a great circle (which is effectively straight, there are no straight lines on the curved surface of the Earth, great circles are the closest that you get to straight)

When you project that great circle onto a map you may get a sinusoidal path, it depends on the projection. Your statement "The ground track of a satellite follows a sinusoidal path" is not correct, that is just an effect of the transformation from a globe to a plane, not "real".

The path of the fragments is, compared to the size of the Earth is very short, it is on the same great circle that the satellite was orbiting in (except as the fragments get closer to the ground they start to move with the atmosphere). If projected they would be on the same track as the satellite. But a great circle is the closest thing to straight on the surface of the Earth. The rotation of the Earth is much slower than the orbital speed. By the time the fragments have slowed to terminal velocity then they fall roughly in a parabolic curve to Earth, the same as if you threw a ball off a building.

I'm not sure this is a good answer, but I'll give it a shot.

Starting with Shoemaker-levy 9, which isn't an ideal example because it broke apart during an orbit about 2 years prior to impact but it's interesting for comparison. 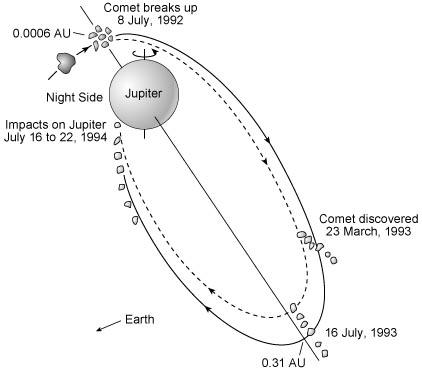 In the case of Shoemaker-levy, while the object broke apart somewhat randomly the pieces all had basically the same orbit, and the ones closer to Jupiter were accelerated a bit faster, so over time the fragments lined up in something close to a straight line. This happens with debris that falls off a comet as well, the debris tends to orbit in a line, along the same basic orbital path. Given enough time, and with an elliptical orbit (comets around the sun or Shoemaker around Jupiter), debris tends to line up and follow the same path.

Same thing happens with comets, though in the case of comets, the debris trail can over time encompass the entire orbit, in a kind of very narrow, elliptical, dusty/tiny asteroid belt.

That's why meteor showers have radiants and they happen at the same time every year. That's where the Earth intersects the orbiting dust trail from the comet.

In the case of meteor showers, any part of the Earth where the radiant is visible in the sky can get meteors. The spread is significantly larger than the diameter of the Earth (but still a generally narrow band around the sun).

In the case of shoemaker levy, with the breakup happening only one orbit prior to impact, the spread was quite small, and, relative to Jupiter's plane or orbit, the shoemaker-levy objects all hit Jupiter in about the same place, but over a period of about a week, in which time Jupiter was able to make multiple rotations. Jupiter has almost no axial tilt (3 degrees) so those impacts occurred nearly along a latitude line of Jupiter (3 degrees off). That's a result of hitting in nearly the same place as the planet rotated below the impact. In the case of Shoemaker-levy, where the fragments hit in single file over time, the impact site is on a plane perpendicular to the planet's rotation.

Source of picture and more images

It's a little unclear what you mean by orbit. If the planet is Earth and the satellite is in orbit around the Earth, it mostly wouldn't hit the planet. Orbits, by their very nature, rarely hit the object they are orbiting. Now if the satellite was orbiting the sun, it could collide with the Earth if the orbits intersect. That's the more common type of comet or asteroid impact. In theory, such a comet or asteroid could break apart as it passed inside Earth's Roche limit. Impacting objects rarely break apart just passing the Roche limit because they're usually too small and too well held together and if they do, the tidal forces that break them apart would give the pieces a relatively low radial velocity compared to the very high gravitational velocity towards the Earth so the spread would be tiny. (this doesn't take into account super-heating and exploding in the atmosphere - which can spread out debris pretty far), but you said break apart in orbit, so lets ignore atmospheric spreading.

The debris pattern in your scenario would be similar to a shot-gun blast. Fairly closely concentrated simply because orbital break-ups are low velocity and gravitational impacts are high velocity, but the spread would look similar to, but not precisely the same as a shot-gun pellet spread.

There are some aspects to your question that are unclear such as when the object breaks apart and what it's orbiting, but mostly, comets or meteors don't break up on their way towards impacting a planet, or if they do, the breakup while in orbit is relatively insignificant.

There are cases where earth has been hit by a pair of meteors, that were orbiting each other at the time of impact. We know that wasn't a "break-up" because the crash sites were too far apart, though in theory, it could have been a shoemaker-levy type of event that may have split the object as it flew past, and then the two objects hit during the next time around.

11
What might cause a planet to have a significant tilt in their orbit?
7
Can a gas giant have an other gas planet as satellite?
8
Official Definition of Satellite?
6
White dwarf's impact on orbiting bodies
3
Does natural satellite(s) of a planet affects its orbital velocity around a star?
0
How to calculate a planet's apparent size when the planet is viewed from a moon in orbit around it?
4
Can a binary star optically “orbit” a planet?
2
Planet orbit circumbinary planet
3
Are all impact craters circular?
1
What is this planet or satellite in this picture?