Does the accelerating expansion of the Universe contradict Hubble's law?

Hubble's law gives a linear relationship between the distance to a galaxy and it's recessional speed.

Observations of distant type 1a supernovae showed that their red shift (and therefore their recessional velocities) were lower than expect, implying that the rate of expansion of the Universe was lower in the past.

However, doesn't this mean that Hubble's law only applies for short distances, as at great distances a plot of recessional velocities against distance would not be linear (as I have crudely tried to show on the graph below)? 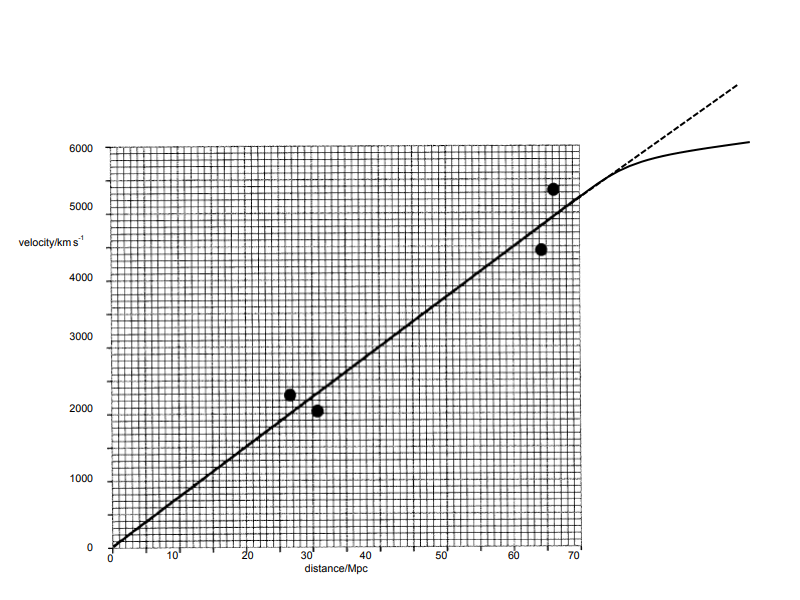 Hubble's law is a bit more subtle than you suppose and an expansion, whether accelerating or decelerating does not invalidate it.

The distance and speed that should be used are their values now. These are known as the proper distance and velocity respectively. In that form Hubble's law works just fine, providing that the cosmological principle - that the universe is everywhere homogeneous and isotropic - is satisfied. The problem with that is that neither the recession velocity or distance that we measure are the values that a galaxy has now.

So indeed a plot of a recessional speed versus estimated distance will not be a straight line as we get far enough away that the light takes an appreciable fraction of the lifetime of the universe to travel to us. The curvature of the line can be used to estimate cosmological parameters and this is essentially what has been done with Type Ia supernovae data you refer to.

The Hubble law gives the velocity of a distant galaxy right now. A galaxy at a distance $d$ recedes at a velocity $v = H_0\,d$ right now$^\dagger$.

However, the relation between $d$ and the redshift — which is the quantity that we observe — is a non-trivial function of the expansion history of the Universe, obtained by integrating the (inverse) scale factor over time, which in turn depends on the densities of matter, radiation, and dark energy.

Paint dots on a rubber band, hold onto one end, and let your friend walk away with the other end. It doesn't matter whether your friend changes pace, maybe even stops and walks toward you for a while, then starts sprinting away from you. At any given time, the velocity of a given dot with respect to you is simply proportional to its distance from you.

$^\dagger$Strictly speaking, this is only true if our assumption is true that the expansion rate of the Universe is the same at every location, which is a corollary of the Cosmological Principle (i.e. that the Universe is homogeneous and isotropic).

Not the answer you're looking for? Browse other questions tagged expansion redshift hubble-constant or ask your own question.