Why does the Earth's orbital eccentricity oscillate with a period of about 100,000 years?

Why does the Earth's orbital eccentricity oscillate with a period of about 100,000 years? What would be the simplest set of conditions and/or fewest body system that would lead to this particular type of periodic variation in eccentricity?

Saying why gets tricky beyond "because of Jupiter", but to clarify on the quote, the statement "Earth's eccentricity follows a 100,000 year cycle" is loosely true but it's also an oversimplification. From Wikipedia.

The Earth's orbit approximates an ellipse. Eccentricity measures the departure of this ellipse from circularity. The shape of the Earth's orbit varies between nearly circular (with the lowest eccentricity of 0.000055) and mildly elliptical (highest eccentricity of 0.0679)2 Its geometric or logarithmic mean is 0.0019. The major component of these variations occurs with a period of 413,000 years (eccentricity variation of ±0.012). Other components have 95,000-year and 125,000-year cycles (with a beat period of 400,000 years). They loosely combine into a 100,000-year cycle (variation of −0.03 to +0.02). 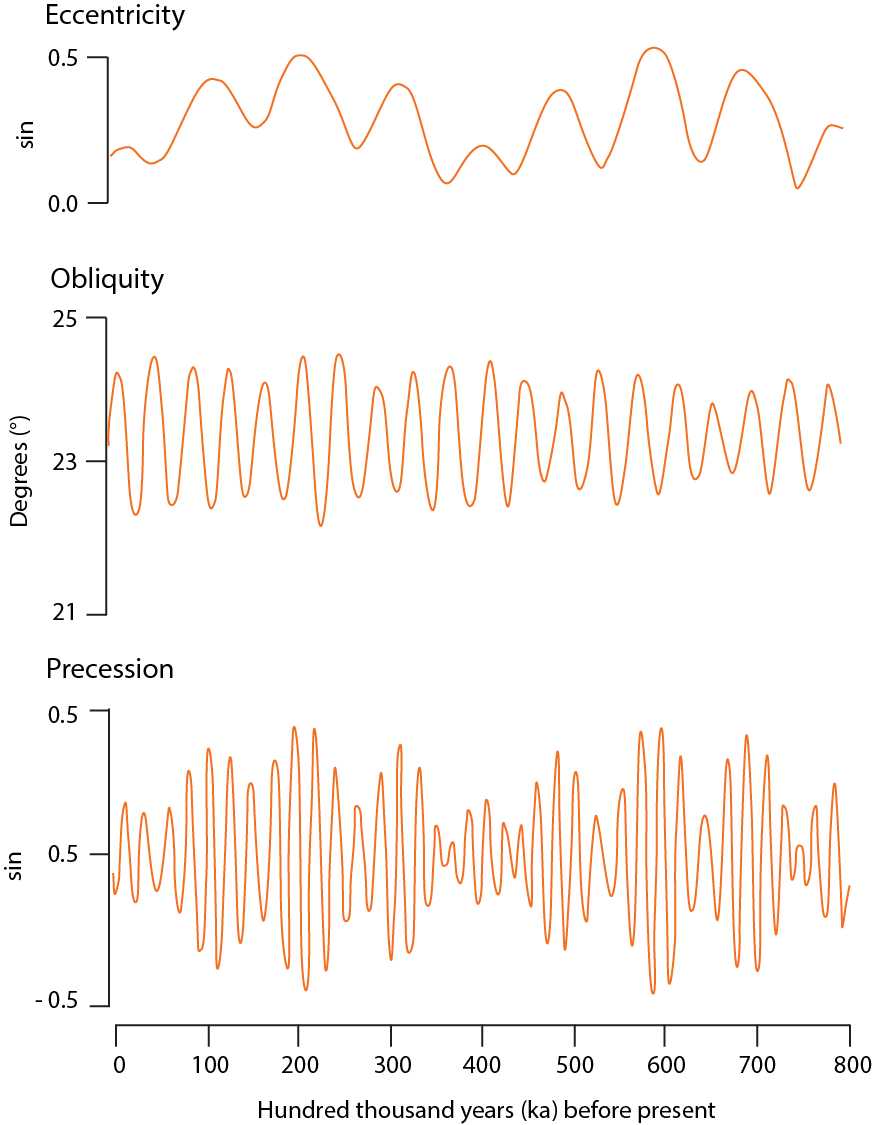 The cause of Earth's eccentricity variation is the other planets, primarily Jupiter, with Venus and perhaps Mars (small but close) and Saturn also having effects. Whether a particular planet is responsible for a particular period is a good question. I'm not sure.

What would be the simplest set of conditions and/or fewest body system that would lead to this particular type of periodic variation in eccentricity?

The fewest bodies would be 3. Sun-Earth-Moon is one example. The Moon undergoes eccentricity variation on a much faster cycle than any of the planets. Sun, Earth, Jupiter or any set of Sun and two planets would work too provided the planets were sufficiently large and/or sufficiently close to affect each other's orbits and (I think) you'd want the two planets to not be in orbital resonance. That might create a different kind of pattern.

Not the answer you're looking for? Browse other questions tagged orbital-mechanics mathematics or ask your own question.

9
Why do certain moons have their rotational period equal to their orbital period?
3
does the orientation of orbital plane of our solar system rotate with the galaxy
3
How to determine the eccentricity, knowing the orbital speed and distance
1
How to find the Orbital Period of two Binary Planets around a Single Star?
18
Why are asteroids with zero orbital inclination rare?
6
Cannot identify mistake in calculating orbital eccentricity vector; magnitude equals one instead of zero (with python code)