What does this figure imply about the luminosity of pre-main-sequence stars?

Check out Figure 1 in http://articles.adsabs.harvard.edu/cgi-bin/nph-iarticle_query?1955PASP...67..154H&data_type=PDF_HIGH&whole_paper=YES&type=PRINTER&filetype=.pdf . 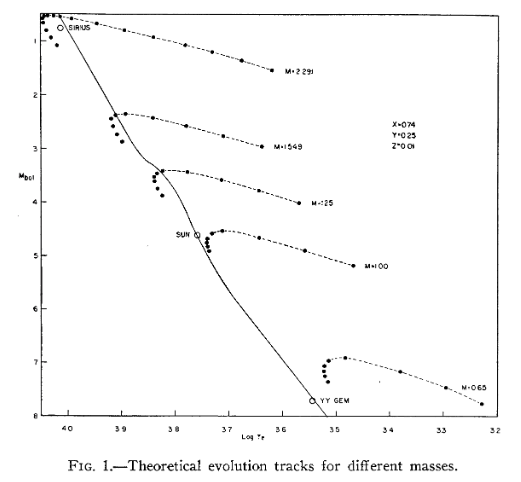 It shows that the mass of the (proto)star is the major factor determining bolometric magnitude.

The brightness of the proto-star increases a little as it contracts and becomes significantly hotter (and the radius decreases), The star moves toward the left of the diagram. As fusion in the core becomes significant the star reaches the maximum point on the curve, this stabilises the core and the star settles into the main sequence, it cools slightly and becomes slightly less bright.

By definition, the luminosity of a pre-main sequence star cannot possibly depend on fusion physics, since energetically-speaking, there is no significant fusion occurring!

However, if you had plotted some lower mass tracks from sources a bit more modern than 1955 (the tracks you show are out of date and incorrect, not including the Hayashi phase for example), you would see that there is predicted to be a brief plateau in luminosity (for stars/brown dwarfs less than about 0.3 solar masses) caused by deuterium burning. This has yet to be observationally tested.

The luminosity of a convective PMS star (which is how they all begin) is determined by its mass and age. To a very close approximation $L\propto t^{-2/3}$, with the constant of proportionality being mass dependent. Higher mass stars are more luminous at the same age, with a shallower luminosity-mass relationship than on the main sequence.

If the star becomes largely radiative, the luminosity becomes roughly independent of time (very roughly) - that luminosity is fixed by the rate at which radiative diffusion can leak the gravitational potential energy of the contracting star. The star follows the radiative horizontal (actually more diagonal for stars lower than about 2 solar masses) Henyey track in the HR diagram.

If the star remains convective, then to first order, stars follow vertical Hayashi tracks, almost independent of their mass. The luminosity is given by the rate of change of gravitational potential energy, which is in turn limited by how fast convection can transfer heat to the surface. The Hayashi track terminates when the star becomes radiative (for higher masses) or when nuclear fusion starts (at lower masses), or never (for brown dwarfs).

A set of more modern tracks is shown below. They are from the Wikipedia page on the Hayashi track, but I believe the tracks are by Palla & Stahler. 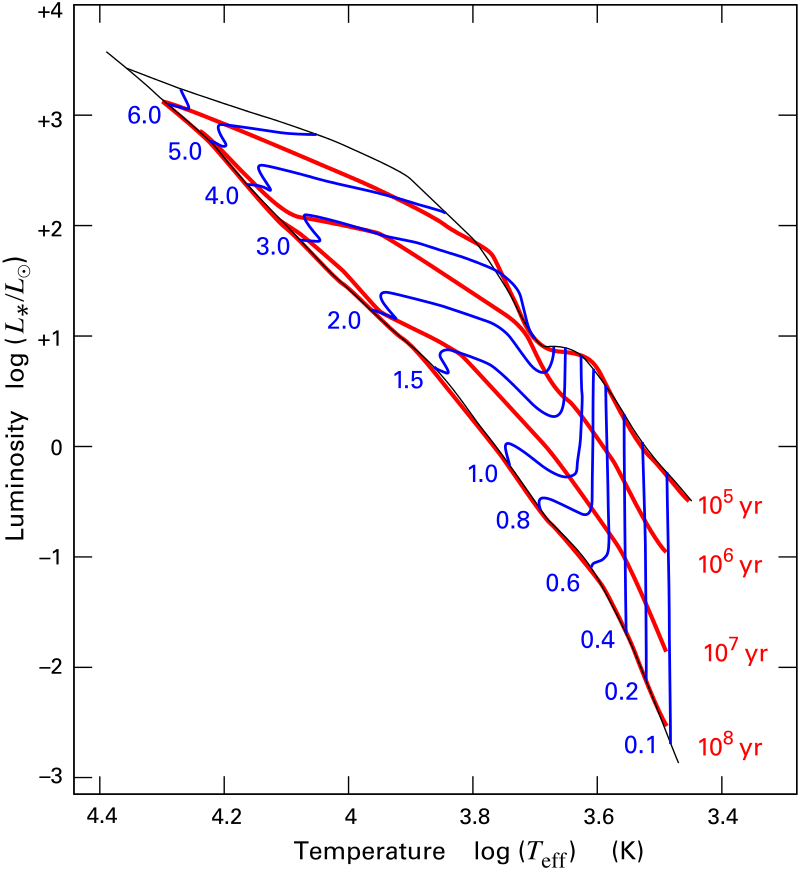 Not the answer you're looking for? Browse other questions tagged star luminosity .