Can Two Stars of One Same Type Orbit Each Other? 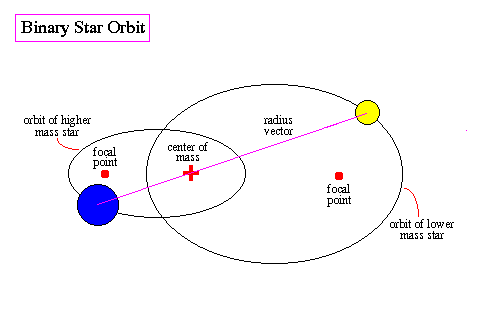 This is a simple, textbook definition of a binary star orbit. One low-mass star orbits a higher-mass star in a narrow but definitive center. For example, the high-mass star would be our own sun--a G-type main sequence star--being orbited by a smaller dwarf, like a red dwarf or a brown dwarf. But what about binary orbits of two identical stars--like our sun orbiting another G-type main-sequence star? Is this sort of orbit possible?

Certainly, the figure only uses different masses because that's the more general possibility (after all, the two masses won't be exactly the same). In fact, if you look at the distribution over mass ratio q in binary systems in Figure 1b in https://arxiv.org/pdf/1304.3123.pdf, it seems that the cumulative number of binaries with mass ratio less than q is more or less equal to q (where q is smaller mass over larger mass). That means the probability of mass ratio between any q and q+dq is about equal to dq and nearly independent of q. So the chance of the mass ratio being between 0.9 and 1 is about the same as being between 0 and 0.1, for example. In some sense, that's like saying all q are equally likely. And of course if q is near 1, then the stars will have the same age and be in the same evolutionary state, so will be the same stellar type as well.

There are roughly 100 billion stars (quite probably more) in the Milky Way galaxy (ours). Of those it is thought that about 85% of them are in multi-star systems (binary, triplet, etc.). There are thought to be of the order of 10 trillion galaxies in the visible universe (for this I used this article on Space.com).

Let's says about half of the stars in multi-star systems are in binary systems (not triplets, etc.). That gives us a (ludicrously rough) estimate of about $4\times 10^{23}$ binary systems in the universe.

Which brings us back to :

But what about binary orbits of two identical stars--like our sun orbiting another G-type main-sequence star? Is this sort of orbit possible?

Given the huge number it's hard to imagine not one of those binary systems being, for all intents and purposes, near identical stars and even near identical G-type stars.

The only really similar stars in a binary system I'm personally aware of are Mizar Aa and Mizar Ab. These are A-type stars, not G-type stars, but they illustrate the idea is possible.

Not the answer you're looking for? Browse other questions tagged star orbit binary-star orbital-mechanics celestial-mechanics .

4
Brown dwarfs and planets
4
How bright can white dwarf stars glow as they accrete matter?
7
Is it possible for two stars to be in a horseshoe orbit around a much larger star?
2
Are Symbiotic and Vampire Stars the same type of star or different?
2
In System KIC 9246715, How Far Does One Star Orbit the Other?
2
Could there be a planet at the barycenter between two or more stars revolving around each other?
3
What would happen to the Sun's evolution if it collided with another yellow dwarf?
5
How do we know that 2MASS J0523-1403 is a red dwarf?
4
Any known Triple Star Systems with this hierarchy?