How does a Solar Transit give more accurate determination of Earth-to-Sun distance?

I understand how Solar Parallax calculation determines the Earth-Sun distance using measurements of (a) the baseline distance between two widely-separated terrestrial telescopes and the (b) two angles - one at each telescope - between the baseline and the line from telescope to the centre of the Sun's visible disc.

How is it that observations of the transit of a planet across the face of the Sun give better results than simply pointing (simultaneously) each telescope at the centre of the Sun's visible disc?

Is the Solar Transit method also superior (in terms of accuracy) to the method of determining Earth-Planet distances by measuring parallax angles relative to 'fixed' background stars? If so, why?

The problem of determining the solar parallax (and inversely the Sun's distance from Earth) by classical optical astronomy has been in most periods since the 17th century dominated less by principle than by the great difficulties of controlling and reducing the measurement errors of the very small angles involved (the solar parallax is only about 8.794" of arc). A good reference source for the earlier period through the 18th century is Albert van Helden's "Measuring the Universe" (1985, Chicago UP).

The method of observing planetary transits across the Sun's disk in order to determine the solar parallax was arguably a method of clear choice mainly or only for the 18th-century solar transits of Venus, which took place only in 1761 and 1769.

The measurement advantage in observing the Venus transits (relative to a difficult direct solar-parallax determination) arises largely because Venus at inferior conjunction is only about a quarter the distance of the Sun, thus its parallax in that configuration is not far off four times as large as the Sun's. What was to be measured directly was the parallax of Venus itself rather than that of the Sun. The size of the parallax angle to be measured was one of a number of factors that it was hoped would allow a smaller relative error in the observational determination. Conversion from the parallax of Venus to that of the Sun was done by using the comparatively much-better-determined relative scale of solar-system distances.

(By contrast, Mercury transits, though more frequent in occurrence than those of Venus, only allow measurement of Mercury's parallax, which is not too much bigger at inferior conjunction than the Sun's own parallax itself, thus offering less advantage than a Venus measurement.)

By the time of the 19th-century Venus transits (again only two, in 1874 and 1882) there was an accumulated experience of the practical measurement difficulties, some of which (like the 'black-drop effect') had not been expected before the 18th-century transits were actually observed. The difficulties meant that advance expectations of measurement accuracy from the 18th-century Venus transits had proved to be over-optimistic. There was some remaining optimism that the measurement difficulties could be addressed, and expeditions were mounted to observe the 19th-century Venus transits, but still the results were not as much better than before as had been hoped. (A useful reference source for this part of the history is J Ratcliff (2008) "The Transit of Venus Enterprise in Victorian Britain".)

In the meantime, competing methods of measuring the Sun's parallax began to be devised, and a more successful example was indeed an Earth-planet distance: to Eros, a minor planet whose orbit brought it much closer to the Earth than Venus' distance at solar transit. The crucial aim again was to measure by parallax a distance that should be as close as possible (and well-determined on the relative solar-system scale of distances, like distances of Venus and other planets). The measurements in the Eros case at its close approach to Earth were done by reduction of photographs and of the positions of Eros relative to selected reference stars as seen from a number of observing stations (A R Hinks, 1904, 'Reduction of Photographs of Eros, with a Determination of the Solar Parallax' (http://adsabs.harvard.edu/abs/1904MNRAS..64..701H)).

From the 1960s onwards, the traditional optical methods of determining solar and planetary distances using solar transits and close approaches of minor planets were entirely superseded by ranging methods, one of the earliest examples being radar-signal reflection from Venus (reviewed along with the Eros measurements e.g. by Eckstein (1963), http://adsabs.harvard.edu/abs/1963AJ.....68..231E). More recently many other range measurements have been obtained e.g. to spacecraft placed in orbit around solar-system bodies.

Edmond Halley in 1716 urged future astronomers to observe the 1761 transit of Venus. His key insight was that observers at different geographic latitudes would see Venus cross the Sun along chords of different lengths. Especially from temporary remote locations, it would be easier to measure differences in transit duration than to measure parallax directly. The disadvantage of Halley's method was that one would have to observe both the beginning and the end of the transit several hours apart. 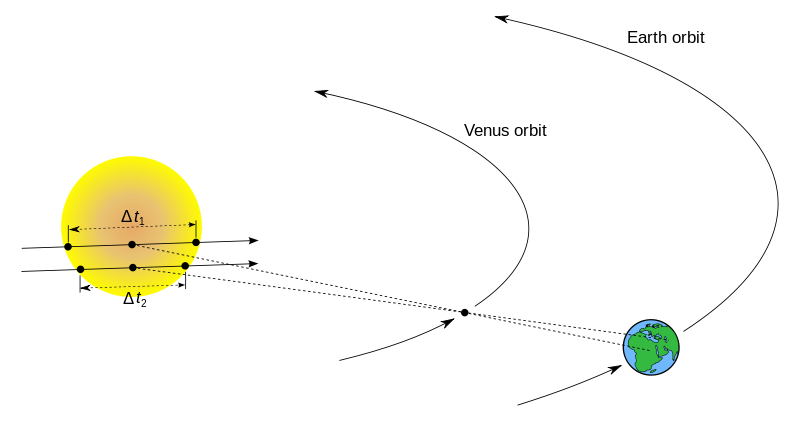 Joseph-Nicolas Delisle in 1760 reasoned that observers at different geographic longitudes would see the transit begin or end at different times. His method did not require anyone to see the entire transit but did require accurate absolute timekeeping.

In practice, the black drop effect introduced significant timing errors which limited the precision of the distance measurement. However, after another transit in 1769, the astronomical community managed to determine the astronomical unit within a few percent of the presently accepted value.

1
Were there any images of a transitary event of Jupiter or Saturn as imaged by a deep probe mission
1
How long does it take the center of the Earth to complete a full orbit?
4
Distance to Proxima Centauri (Gaia VS New Horizons parallax program)
9
Can New Horizons be used to measure the distance to Betelgeuse (despite its fickle photocenter)?
3
Occultation of planets by other planets
4
How to solve numerical problems based on diurnal parallax method (formulas, examples and calculations)?
9
How exactly was Giovanni Cassini able to measure the distance to Mars?
3
How 3’ minute arc error in the Sun altitude might amount to 7’ minute arc displacement in Sun's longitude?