Is there a rough analytical expression for the Milky Way's radial mass distribution?

I found the image below in Space.com's article This 3D Color Map of 1.7 Billion Stars in the Milky Way Is the Best Ever Made, although it is not the map mentioned in the title.

The caption for this image reads:

This radial velocity image shows the movement of 7 billion stars. The colors run from blue (stars moving at 50 km/s toward us) to red (stars moving 50 km/s away from us). The white color shows when, on average, the stars are not moving in the line of sight with respect to us. Stars lagging behind as they orbit the center of the Milky Way appear to be traveling away from us, and those speeding up appear to be traveling toward us. Credit: ESA/Gaia/DPAC

If you imagine a band along the galactic equator the dominant velocity shows two positive and two negative "peaks", with a zero crossing in the direction of the galactic center.

Purely for fun I wanted to see if I could reproduce this behavior with a simple calculation based on a 2D calculation assuming circular motion and a radial density distribution $\rho(r)$ which I could then use to figure out a rotational velocity distribution $v(r)$, bun I swiftly realized that I have no idea what the density profile would look like. 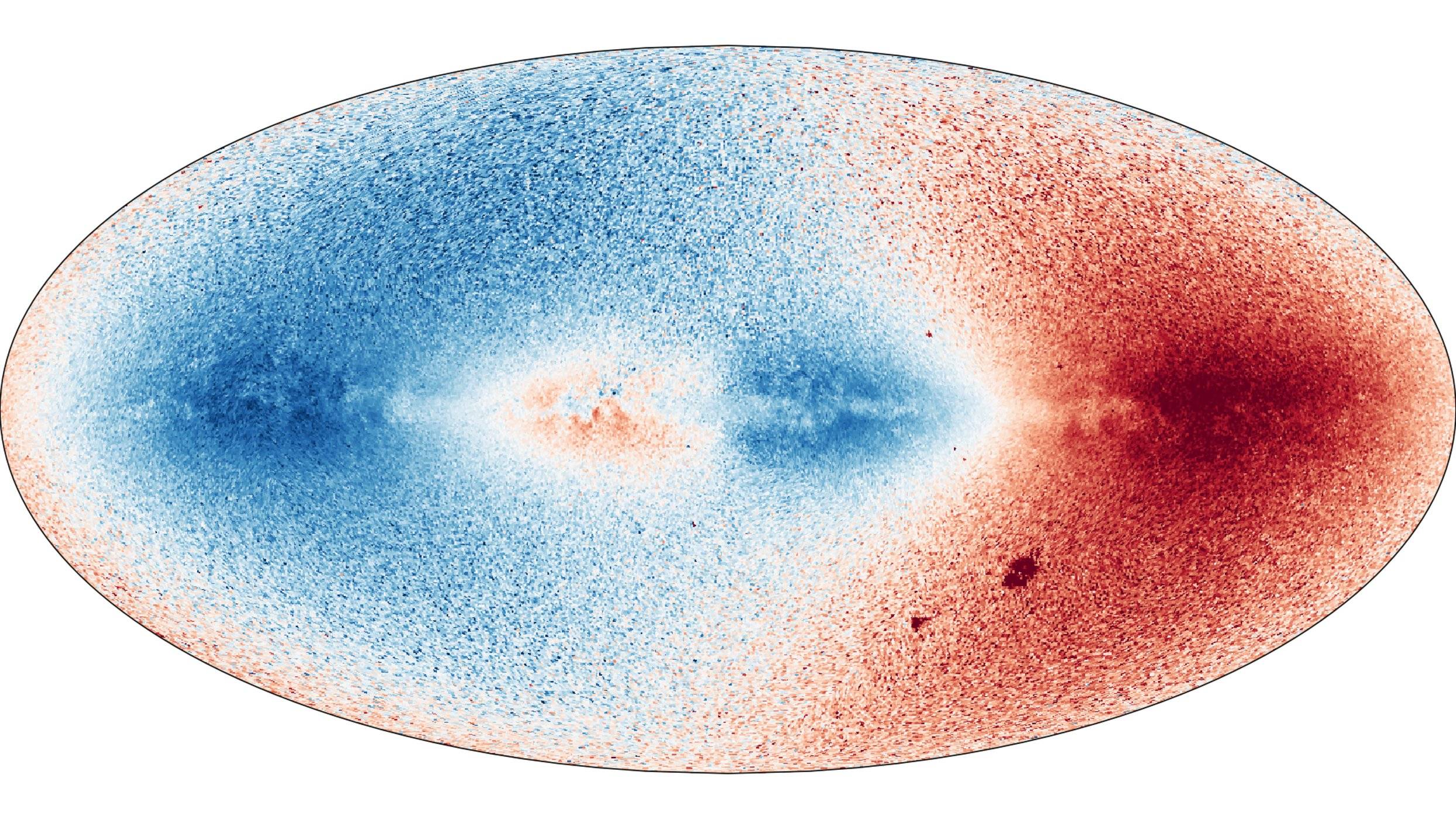 For the purposes of this simple exercise, what would be an analytical expression that roughly matches the Milky Way's radial density profile, projected on to its equatorial plane?

The simplest example astronomer's work with is the radial density profile of a Single Isothermal Sphere (SIS). It is called this because it is spherically symmetric (and thus applicable to a 2D plane for your purposes) and all objects orbit with the same velocity (and thUs have the same "temperature", hence isothermal). The density profile takes the form:

Other, more realistic density profiles have been found by running simulations of the Universe and matching functional equations to the density profiles of the resulting galaxies. Such popular results are the NFW profile and the Einasto profile.

The NFW profile is a two-parameter function, given by

The Einasto Profile is again a two-parameter model given by

where $A$ and $\alpha$ are configurable parameters.

For spherically symmetric distributions, Newton's Shell theorem allows one to treat all mass inside a sphere defined by an orbit's radius as if it were at the center, and to ignore all mass in the shell outside of that radius. Is there anything like an analog to this for a radial distribution within a plane?

@Rob Jeffries mentioned that "You get the density distribution by looking at the velocity data." I also believe this is what you are looking for, so I will give some calculation details.

Assume spherical symmetry, and circular motion, the gravity equates to the circular motion as $$ \alpha \frac{GMm}{R^2} = \frac{mv^2}{R} $$ where $G$ is gravitational constant, $M$ is the enclosed mass at the radial distance $R$, $v$ is the tangential (not radial) velocity, $m$ is a test mass, and $\alpha$ is a constant for effective potential, which depends on the assumed shape of potential. Then, we can express the mass $M$ as the density profile $\rho$. With the spherical symmetry, the profile $\rho \propto M R^{-3}$. Therefore, $$ \alpha' G \rho R^2 = v^2 . $$

Since observationally we can construct the rotation curve which is $v = f(R)$, the density profile is then a function depending only on $R$: $\rho = g(R)$, i.e., the radial mass distribution.

Some notes include i) the mass $M$ includes dark matter; ii) $v$ is the tangential velocity, not the radial velocity as presented in the figure you mentioned.

Not the answer you're looking for? Browse other questions tagged galaxy milky-way velocity mathematics .

8
What is the shape (along the plane, not up-down) of stellar orbits in flat spiral galaxies

28
How far is the Earth/Sun above/below the galactic plane, and is it heading toward/away from it?
3
What is $v_{GSR}$
4
Galaxy rotation curve and dark matter
1
Question regarding the Milky Way when calculating galactic space velocities for galaxies
2
Why does the neutral hydrogen velocity have this characteristic behavior in the galactic plane?
6
Can we see the stars at the edge of the Milkyway?
2
How is interstellar gas density mapped from GAIA data?
3
does the orientation of orbital plane of our solar system rotate with the galaxy
0
How do we estimate the dimensions and mass distribution of a galaxy's dark matter halo, beyond the effective limits of its visible matter?
18
How are constellations intact if the stars are rotating around galactic nuclei?