This is not about matter accreting on the event horizon; that's the issue, in fact. Rather than crossing the EH and entering the BH, matter seems to accrete on the EH and never goes in. So the BH never grow, the EH never gets larger due to accretion of matter.

The outside observer is not infinitely far away; it's space-time that goes to infinity at the Event Horizon. In fact, it seems to be true that the closer one gets to the EH, the further away one is and the longer it takes to get there, approaching being infinitely far away in both space and time.

Good question. I am reminded of Einstein's 1939 paper on a stationary system with spherical symmetry consisting of many gravitating masses. He said “it is easy to show that both light rays and material particles take an infinitely long time (measured in "coordinate time") in order to reach the point r = μ/2". That would suggest black holes can never form, but we have evidence of black holes, see Monitoring stellar orbits around the Massive Black Hole in the Galactic Center by Gillesan et al dating from 2008. So what gives?

I rather think the clue is in the original "frozen star" black hole concept. See Robert Oppenheimer and Hartland Snyder's 1939 paper on continued gravitational contraction. Also see the 1971 Physics Today article introducing the black hole by Remo Ruffini and John Wheeler. They said in a sense the system is a frozen star, and in another sense the system is not frozen at all. They also said “according to figure 3, the fall of a test particle towards a black hole ends at r=2m as seen by a distant observer. The fall ends at r=0 according to someone falling with the test mass itself. How can two different versions of the truth be compatible?” They can’t.

TL;DR look at the diagram at the end of the post.

Following the Principle of Relativity, the laws of physics are the same everywhere and for every observer. Despite that, measurements of observers can differ, as long as they are consistent within the rules of general relativity. Furthermore, horizons limit what can be measured by some observer. In this spirit, let's do a Gedankenexperiment:

Take an off-the-shelf black hole spacetime: non-rotating, uncharged and spherically symmetric with mass $M$. Add some matter that is falling towards the black hole: a thin shell of gas to keep the spherical symmetry (very low density gas, such that we can ignore heating and other accretion processes). Let's throw in a beacon, that follows the gas shell and emits light signals in constant intervals. What happens?

This is actually really simple to describe in words: Everything crashes into the singularity (or whatever garbage dump might be left over from all the spaceships, astronauts, beacons and hypothetical particles that other physicists have thrown in there).

The curvature of spacetime is increasing towards the singularity and there is no other curvature singularity other than the center of the black hole. This means, that the gas and the beacon smoothly fall straight through the event horizon and from their point of view there is nothing extraordinary about that (apart from the extreme gravitational lensing and the noticeable tidal forces). Remarkably, they reach the central singularity in finite time, i.e. the beacon emits a finite number of signals before it hits the singularity.

You have specified an outside observer at a fixed position, but then just go to a fixed position that is so far away, that we can call it infinitely far away. This is mathematically convenient for the description and one of the most common observers chosen, because you don't feel the gravitation of the black hole anymore and your everyday spacetime coordinates are exactly the coordinates of the Schwarzschild metric. This infinity is only approximated for convenience and has nothing to do with the infinity at the event horizon.

This outside observer sees the gas fall towards the black hole. The closer it gets to the event horizon, the more it seems to slow down and the fainter it becomes. The reason is, that the light needs more and more time to leave the gravitational well of the black hole. Light emitted exactly at the event horizon would need infinitely long to reach this observer. The signals that the beacon emitted before it crossed the event horizon (in its own proper time of the freely falling observer) are stretched longer and longer into infinity and the total number of signals the observer can ever measure is still finite. Basically the life of the beacon can be divided into an observable part and an unobservable part. The observable part is stretched into infinity such that we say that the beacon is slowing down.

Saying that light takes longer is not entirely correct and in some way similar to saying that there is more space, because the speed of light is constant. This is described correctly by the Schwarzschild coordinates, which have a coordinate singularity at the event horizon. This singularity is not intrinsic to the spacetime (not a curvature singularity) but arises from the choice of this coordinate system.

This description is equally valid and describes the correct physical behavior, just as the freely falling observer. The apparent paradox of these two different observations can be cleared up by a careful look at the transformation between the observers like many other supposed paradoxa from special relativity.

The expansion of the Schwarzschild radius from $R_1$ to $R_2$ is not something you see from the gas shell itself. However, other accreting stuff that fell in before is eclipsed! Imagine a reckless astronaut who coasted into the black hole before we launched our gas shell. From our vantage point we see him or her approximating the event horizon $R_1$. But at some point the gas shell is so close to the old event horizon, that the new outer event horizon hinders some of the light that previously could have reached us to escape. Still the image of the astronaut doesn't disappear completely, you can only observe less of the astronaut's proper time.

I don't think that there is a very nice description of how the light from point C ends up inside the black hole, because the coordinate singularity is not at a fixed point anymore and non-vacuum black hole solutions are tricky in any case. 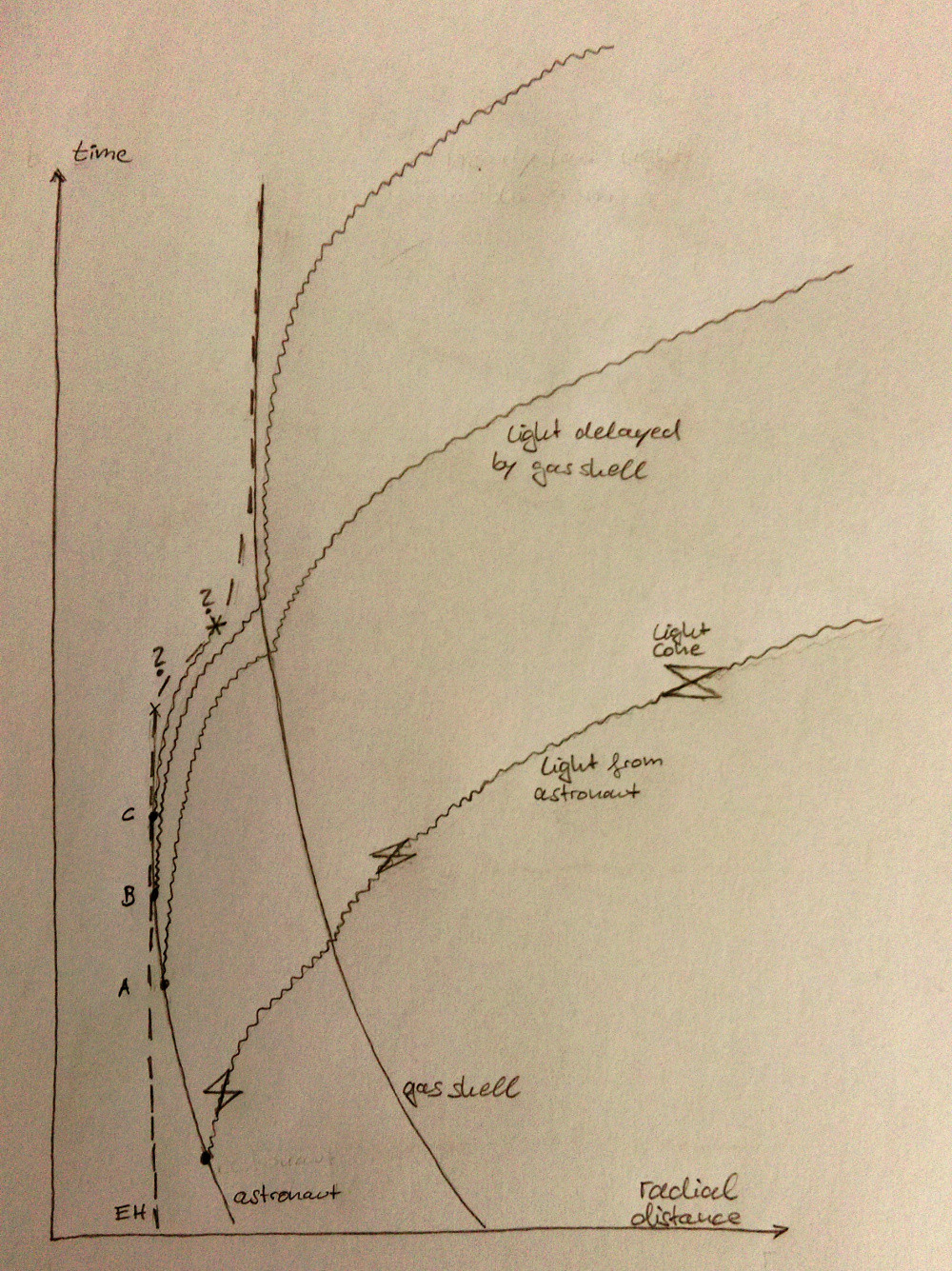 Additionally, you could only see the gas shell forever, if never again any other matter would fall in and conceal it. The hailstone analogy in the answer by John Duffield illustrates this behavior of the event horizon growing by passing through the accreting matter quite nicely.