Trisolar syzygy and it's effects on the planet

Slightly spoilers here, but in the novel The Three-Body Problem, there's a scene in which Civilization #184 is destroyed by the stacked gravitational attraction of the planet's (aptly named Trisolaris) three suns.

This destruction is portrayed as things (like a sword) suddenly getting lighter, and people and buildings starting to float up in the air, as the atmosphere of the planet is being sucked into the three aligned suns. This is explained as being a "Trisolar Syzygy".

However, I don't understand how that is possible. As I understand it, a syzygy happens in any sort of gravitational alignment of some astronomical bodies, and it's apparently what generates the tidal variation on the earth from the moon's orbit. But would the tidal forces be enough to cause this effect?

In the novel, the planet is in the Alpha Centauri system, which may have a planet in the habitable zone, and is an actual trinary system. Could such an astronomical event actually cause some effect like that in this situation?

I'm asking this here because I thought it wouldn't fit in the Science Fiction Q&A, as I'm more interested in the astronomical side of it, but I'd appreciate a pointer if I don't need to ask this here.

Is it just for the spoiler?

My guess is that the 3 suns aligned create a sufficient gravity field for the outermost parts - less well attached - of the planet (atmosphere, people, buildings) to be in the Roche Limit of the system, causing them to be sucked out spiraling inwards.

Here is a funny vid I found to illustrate: https://www.youtube.com/watch?v=6e5yyIcq40o .

In addition to the answer above, passing inside a stars Roche limit would likely cook the planet for anything but the smallest, coldest stars or white dwarfs. Evaporating the planet's oceans and blowing off much of the atmosphere even before any houses started floating.

The Roche limit depends on the density and rigidity of the two objects, but it's on average just a few radii distance, much closer than you'd want a planet to get to any star. The only natural satellite in our solar-system that orbits within it's Roche limit is Phobos around Mars. If Phobos was liquid it would drift apart and standing on the Mars side of Phobos, you would experience weightlessness and float off the moon. Phobos' rigidity and firmness keep the moon itself from drifting apart. It's also very small and in a nearly circular orbit so the forces are pretty constant. In your scenario, the planet "passing through" would be very jarring.

A planet passing through a Roche limit in a strange, 3 star orbit would experience enormous squeezing and stretching, like Io but much worse. It would completely resurface with Magma every time it happened. There's no scenario I can see where people would live long enough to see their houses floating. They'd be dead long before then. 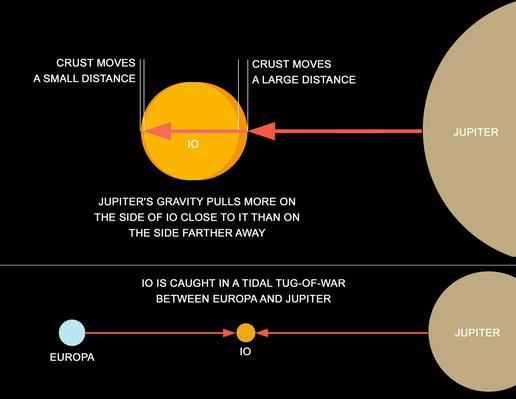 Not the answer you're looking for? Browse other questions tagged planet star-systems tidal-forces earth-like-planet n-body-simulations or ask your own question.

9
How small can a planet be and still have Earth-like gravity?
0
Is it possible to know if a planet is located in the Habitable Zone knowing it's properties?
7
Effects of the solar tide on planets
1
Code/Package for multiple planet simulation
1
Could a near collision with small black hole account for the effects of the 9th planet?
2
Is it possible to have a trinary star system with a planet that orbits their barycenter?