How will planets behave in the night sky as seen by Mars colonists?

Certainly among the first colonists on Mars there will be a few people interested in Astronomy enough to enjoy the night sky.

For them, familliar Mars will be missing and there will be a new, unfamiliar planet instead.

Planet by planet, how will their appearance and especially their behavior as seen from Mars differ from the way they behave in the night sky as seen from Earth?

This should be a relatively simple problem to solve - which is the Academician's way of saying "do it as a homework problem" :-) .

First thing: find some celestial mechanics calculator and determine when each outer and inner planet is visible in Mars' night sky. That gives you timings.

Next thing: compare the distance from each outer planet to Mars vs. Earth. Maybe start with closest and farthest approach as examples. That'll tell you both the angular extent of the planet as well as the relative brightness compared with Terran observations. Don't forget to add a fudge factor for the atmosphere.

In fact, probably the most obvious difference will be that stars no longer twinkle. (yeah I'm ignoring during serious dust storms). You could use a wicked large primary and have no need of adaptive optic corrections.

BTW there are photos of Earth as seen by the Mars rovers (or maybe just the surveying satellites, I forget) so you can get an idea of the color/features available.

Celestia may do what you want.

Summary to "Planet by planet, how will their appearance and especially their behavior as seen from Mars differ from the way they behave in the night sky as seen from Earth?"

To see that for yourself...

In Celestia 2.7, pick your viewpoint. Let's pick the center of Mars, at latitude 0, longitude 0, altitude 0 km. 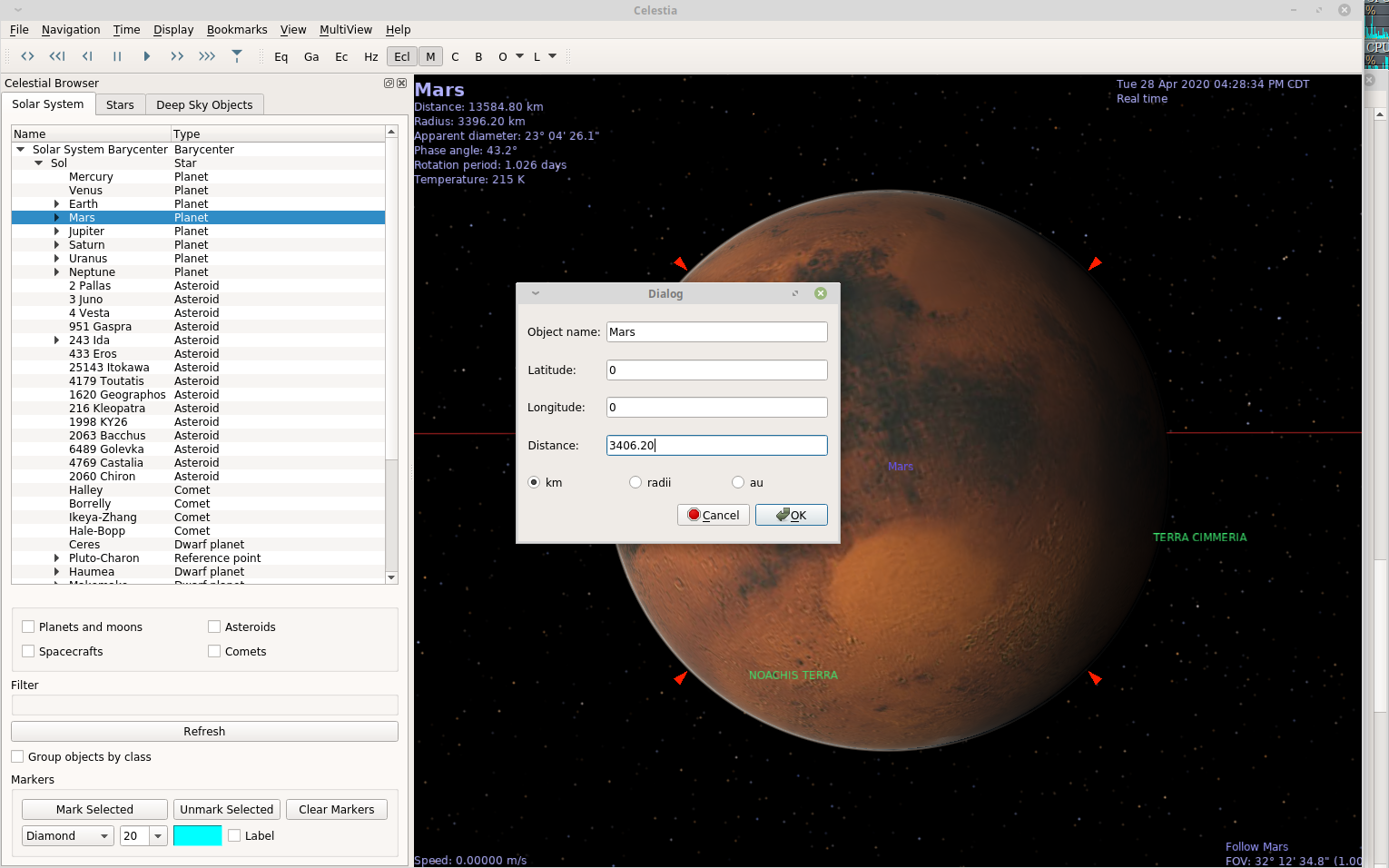 Now sometimes the texture wrapped on Mars is visible and we don't want that getting in the way, so let's make Mars invisible. 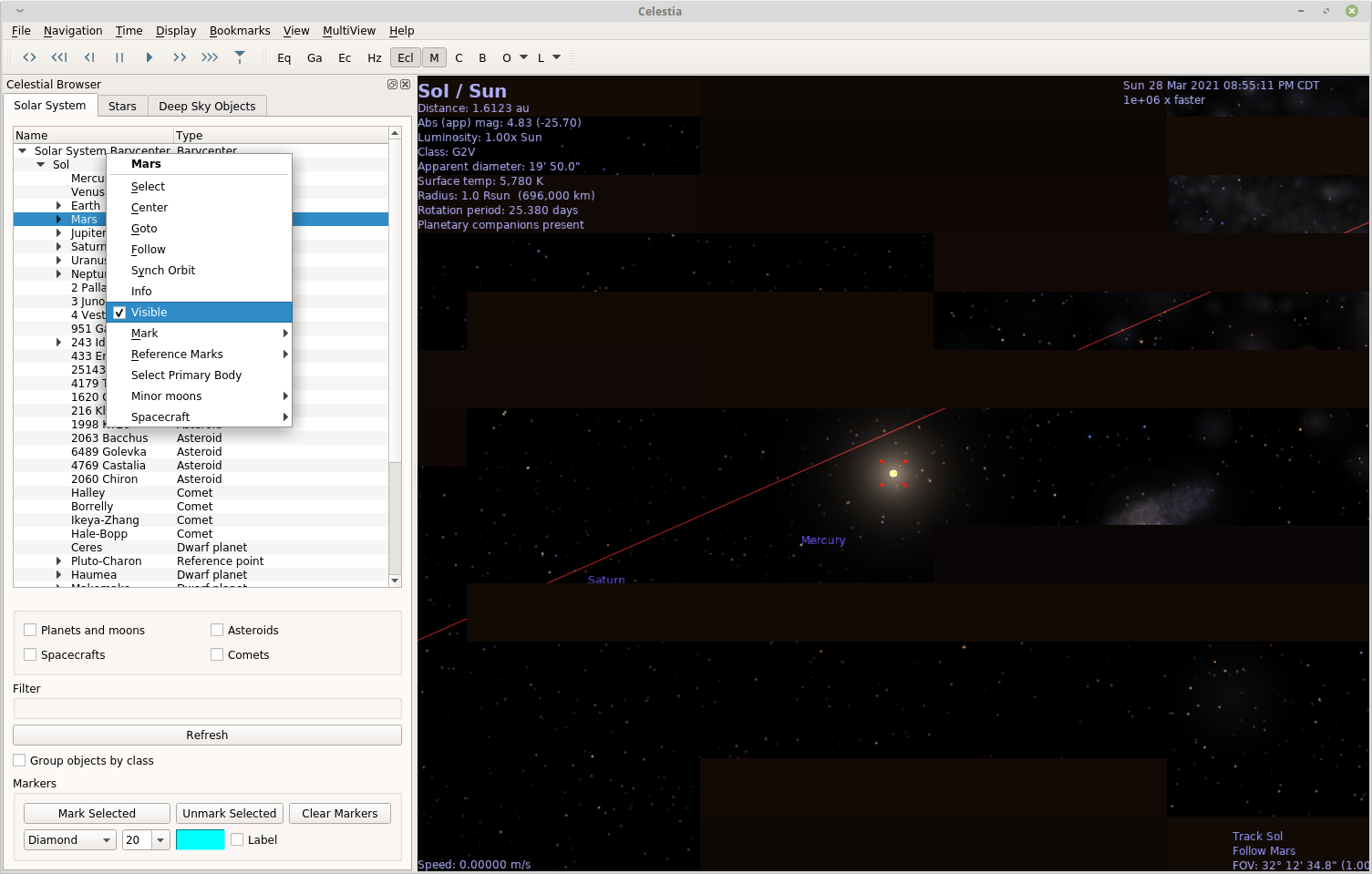 While we're here, let's also pick "Follow" so that Mars will not leave us behind when we speed up time.

Now we need to find the Sun. 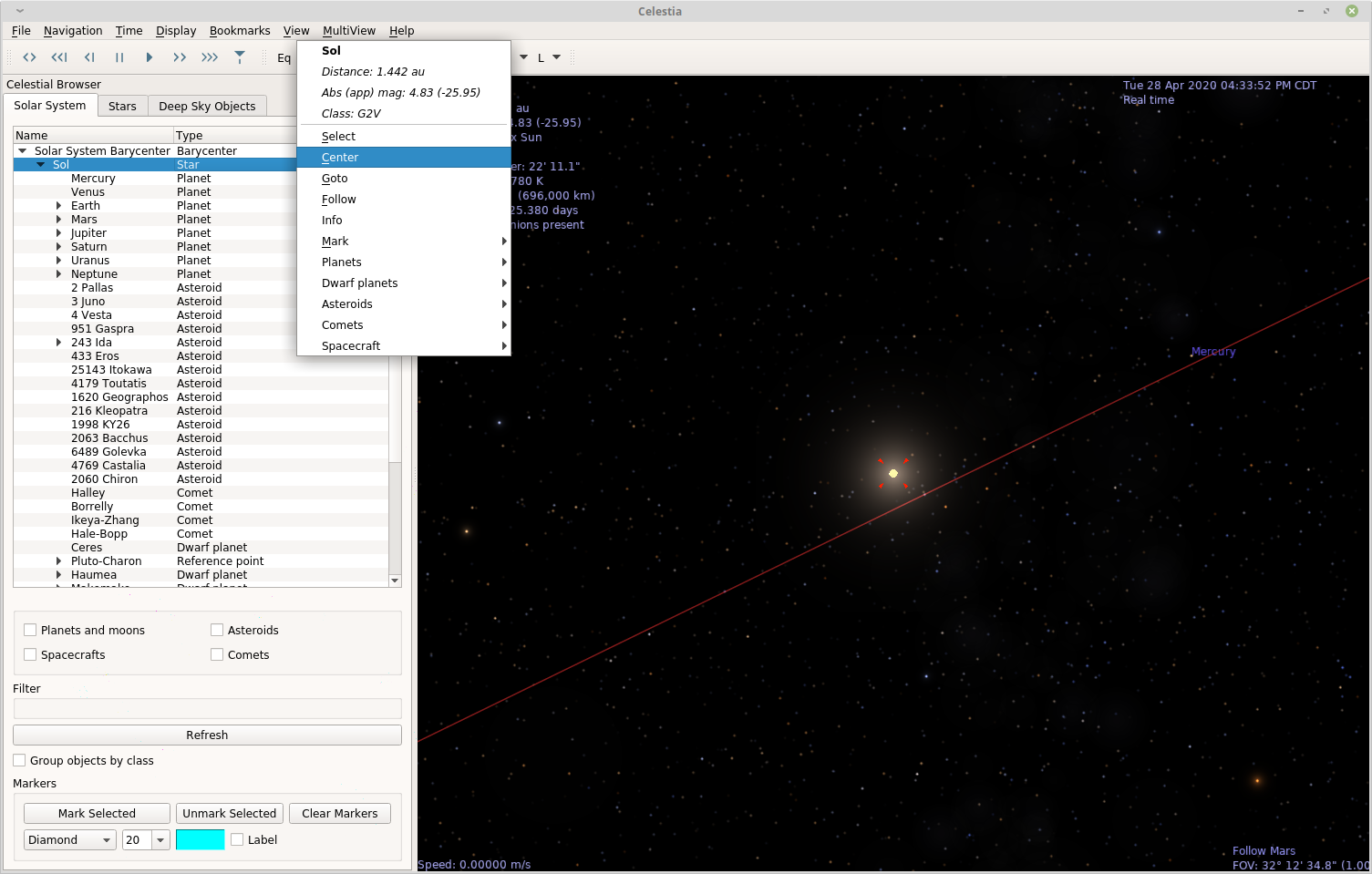 If we speed up time now, we will be at the center of Mars, always pointed in the same direction (relative to the distant stars), so every Martian year, the Sun will roll back through our field of view. We need to track the Sun. Click on the Sun in the starfield, which will highlight it with four red arrowheads. Then type "T" (the capital letter "T"), which will set us to track Sol.

Now let some time pass. Rather a lot of time. Maybe raise the rate to between 1e+06 and 1e+08 -times faster so some of the outer planets will wander in among the inter planets.

It can be helpful to have visible coordinate systems. In my screenshots, the "Ecl" (ecliptic line) is shown, using the toggle on the (menubar)Guides.

You may notice that Mercury's orbit doesn't quite fit in the field of view (shown in the lower-right corner, together with out "Track Sol" and "Follow Mars" conditions). You can narrow the field of view by typing comma, ",", and widen it by typing period, ".". A FOV of 70-ish degrees seems to keep the inner planets in view at all times. 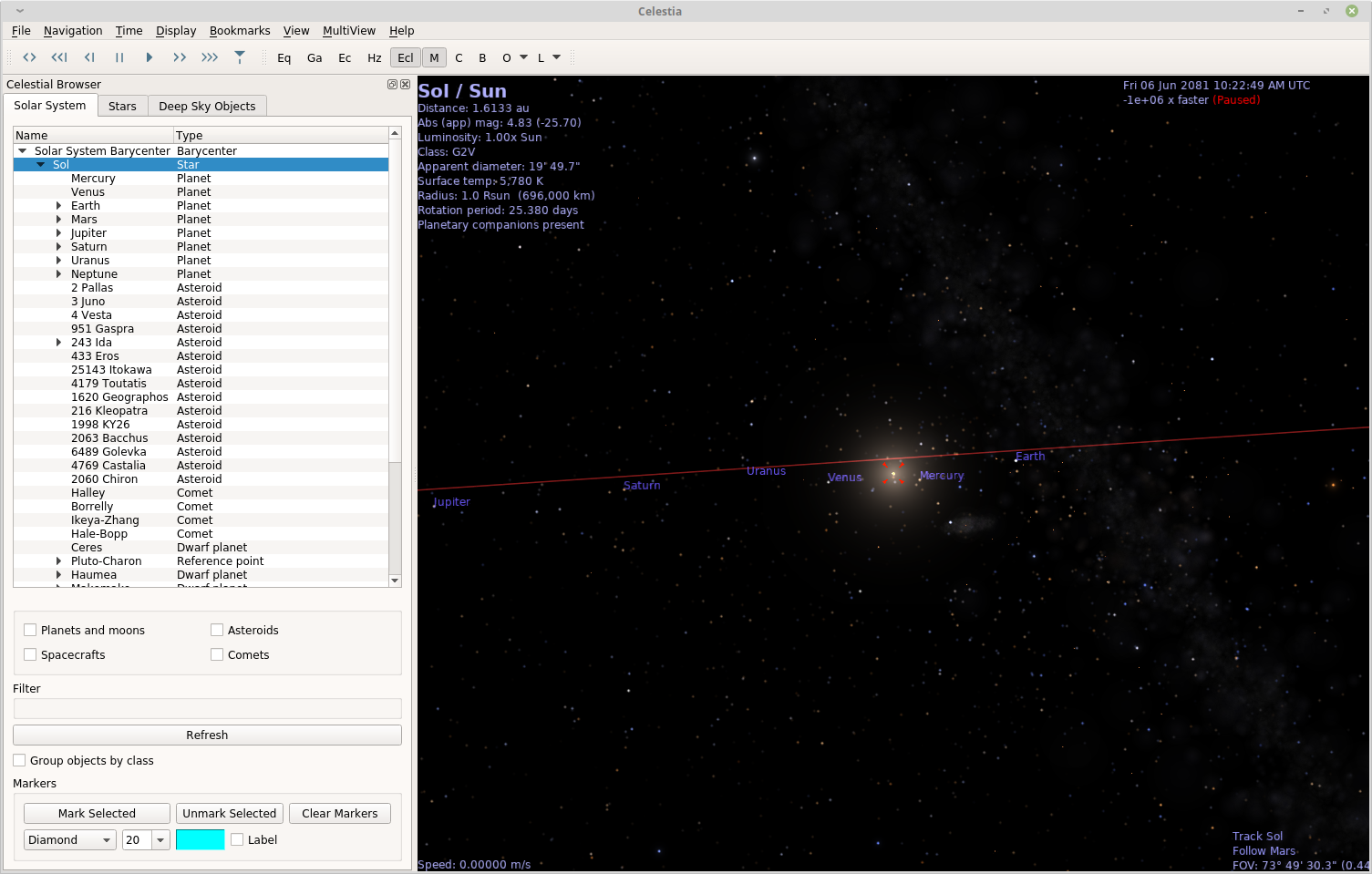 Not the answer you're looking for? Browse other questions tagged amateur-observing mars night-sky .

16
Is there an online planetarium where the observer is on another celestial body?
5
What is wrong with this measurement of the synodic period of Mercury?
6
Venus' magnitude during inferior conjunction
5
When will the next transit of Earth be visible from Mars? Was the last one really on May 11, 1984?
3
On other planets, does the sun appear to pass through the same zodiac constellations?
4
How would one calculate the synodic period of the Earth and an elliptical orbit?

7
Mars night sky - how many stars visible?
1
Where is Mars in the night sky
5
Mars night sky -- Phobos and Deimos?
2
Mars and 115 mm - which eyepieces?
9
How does the Moon move in the "night" sky as seen from the poles?
2
Comparing accuracy in Starry Night and Alcyone Software
2
Help understanding the false MRO observations of hydrated minerals on Mars
11
Will Starlink deface the night sky?
0
What is the bright star that never seems to move and sometimes the only star in sky?