You can't without assuming something about the overall velocity.

The radial velocity is one component of a velocity vector; you are missing the other two components, which could in principle be anything. However, you could assume that as open clusters are mostly quite young and members of the Galactic disc population, that they are moving in the disc on roughly circular orbits. NB. This cannot possibly work for globular clusters, which are an entirely different population, many with non-circular orbits and orbits out of the galactic plane.

Having made that assumption, your radial velocity is the orbital velocity resolved through an angle that is formed between your line of sight to the cluster and a tangent to the Galactic centre at the cluster's Galactic position. 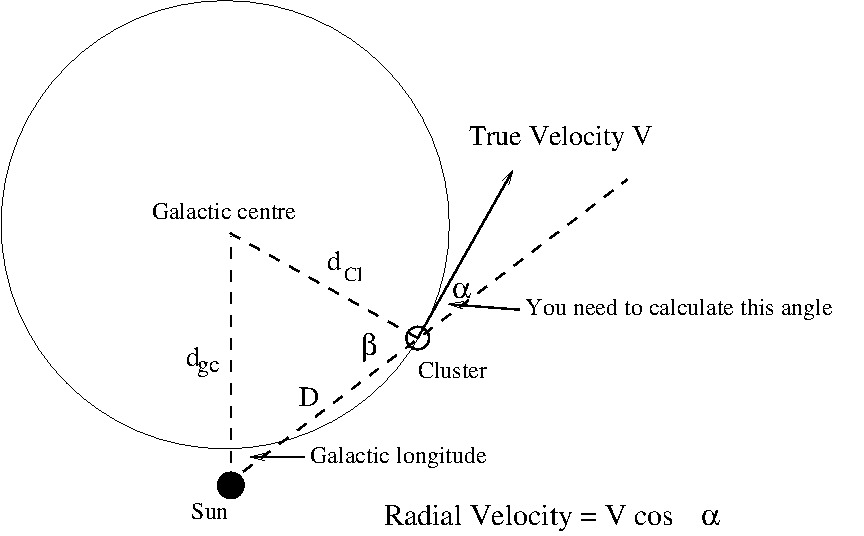 Not the answer you're looking for? Browse other questions tagged astrophysics orbital-mechanics orbital-elements velocity star-cluster or ask your own question.

3
radial velocity fitting of a binary
1
Suns Orbital speed and escape velocity question
8
Why does Gaia use only calcium NIR lines for stellar radial velocity measurements?
3
Calculate the orbital phase when plotting the Radial Velocity data of a transitting exoplanet
3
Why is it impossible to estimate the inclination of an exoplanet with the Radial Velocity Method?
2
Calculating object velocity at perihelion