If we want to observe a galaxy for which we have optical data, what parameters we need to know to calculate its total radio flux at 3 cm? Specially I am interested to know how to differentiate among the different process in radio, like synchroton, free-free and inverse compton? Specially when I know its Hydrogen recombination line luminosity is in the power of 42, and electron temperature 10000 K with distance 20 Mpc

From literature, I assume 3 cm is 10GHz, which should fall under either synchroton or free-free emission. But how do I know exactly?

Without a lot of expensive equipment the best you can do is make a rough estimate. By incorrectly assuming that the light that you see describes the black body temperature of the object, by assuming that the system is in thermal equilibrium with itself and that the temperature within the system is spatially and temporally uniform, you can use Planck's law to calculate the spectrum. 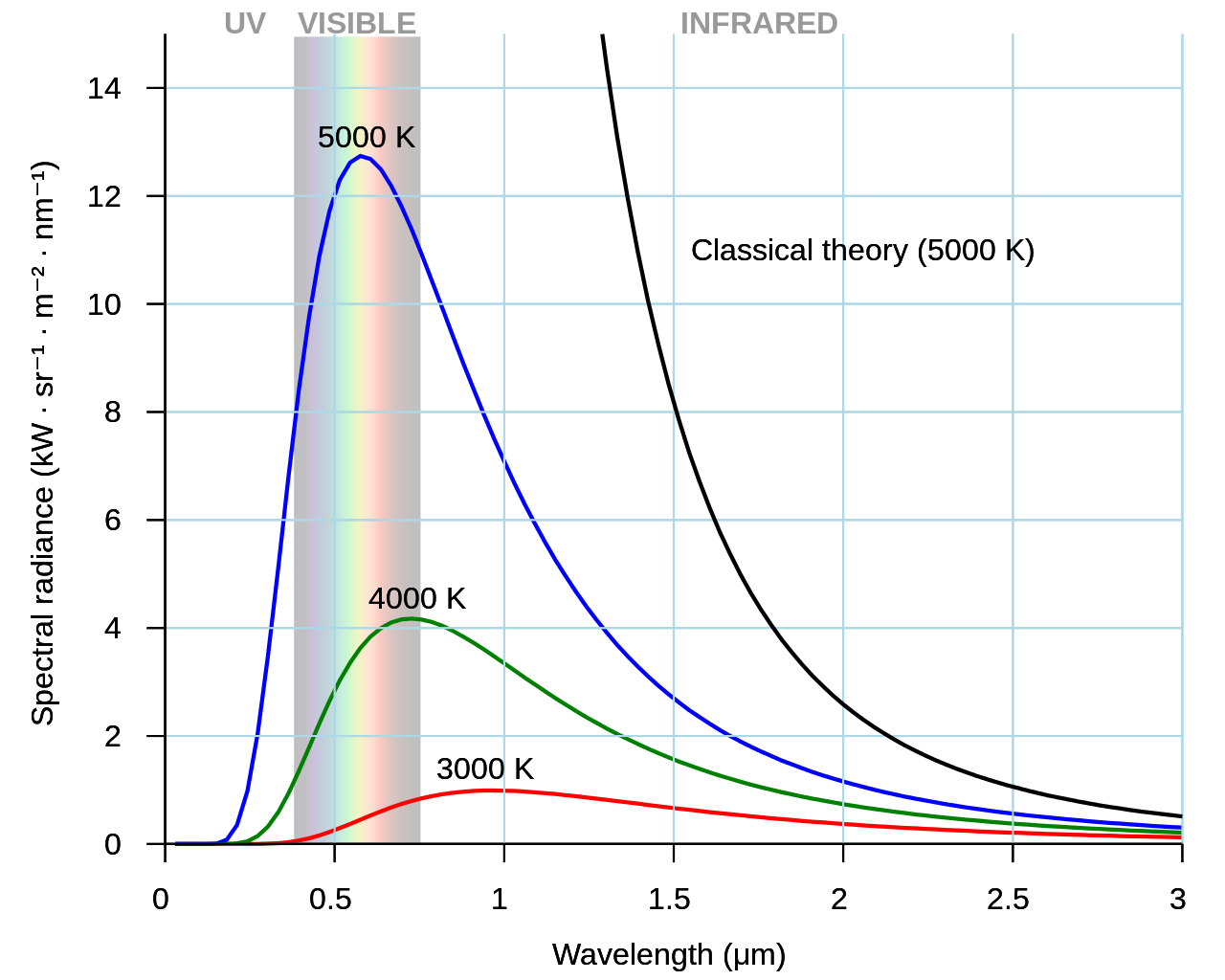 Planck's law describes the spectral density of electromagnetic radiation emitted by a black body in thermal equilibrium at a given temperature $T$.

The spectral radiance of a body, $B_ν$, describes the amount of energy it gives off as radiation of different frequencies. It is measured in terms of the power emitted per unit area of the body, per unit solid angle that the radiation is measured over, per unit frequency. Planck showed that the spectral radiance of a body for frequency $ν$ at absolute temperature $T$ is given by:

where $k_B$ is the Boltzmann constant, $h$ is the Planck constant, and $c$ is the speed of light in the medium, whether material or vacuum. The spectral radiance can also be measured per unit wavelength $\lambda$ instead of per unit frequency. In this case, it is given by:

The "Planck Calculator for Infrared Remote Sensing" can be used to make some calculations:

That's the oversimplified (inaccurate) layperson's calculation. More accurate calculations are made by allowing for everything from: relative velocity, the composition of the object's atmosphere (and our own), the effect of distance, even other elements, upon the spectral distribution (short list).

Consequently, after correcting for light travel time effects the response of the Balmer and optical helium lines should generally be strongest during low continuum luminosity states. Responsivity that depends upon photon flux and continuum state may explain a number of outstanding problems currently under investigation in broad line variability studies of these and other emission lines. [Abridged] 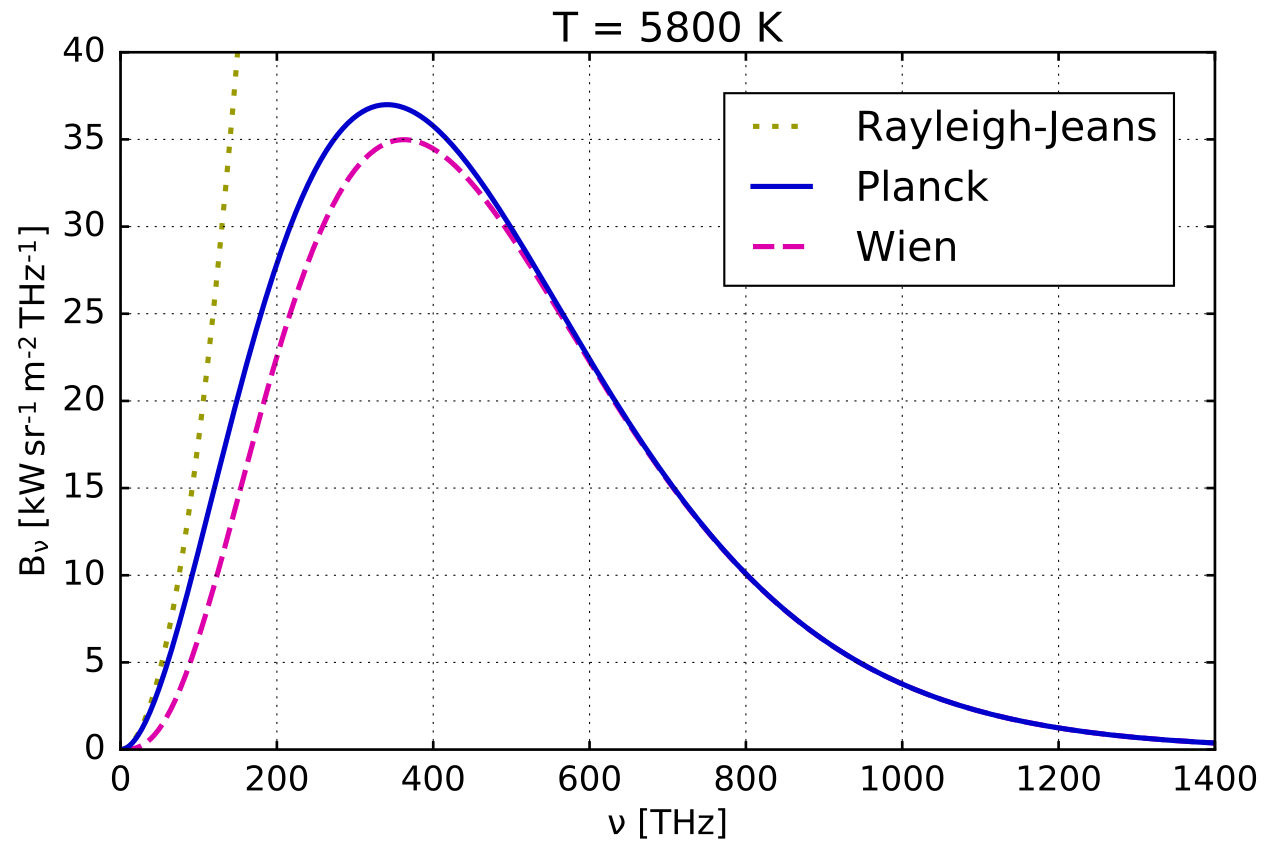 If you want to include the effect of quantum gravity in your calculations a recent paper is: "Black body radiation in a model universe with large extra dimensions and quantum gravity effects" 8 Jan 2018, by Nozari, Anvari, and Sefiedgar

Abstract: "We analyze the problem of black body radiation in the presence of quantum gravity effects encoded in modified dispersion relations and in a model universe with large extra dimensions. In this context, modified form of Planck distribution, Jeans number, equipartition theorem, spectral energy density, Stefan-Boltzmann law and Wien's law are found and the corresponding results are interpreted. Then, entropy and specific heat of black body radiation are obtained in this setup. Finally, the modified form of Debye law and Dulong-Petit law are investigated in this framework.".

Their 3M diameter SPIDER 500A's H142-One receiver has a 1.42 GHz superheterodyne type radiometer/ spectrometer, double conversion (type UP/DOWN) with 50 MHz bandwidth (RF=1.395MHz-1.445MHz) and 14-bit analog to digital converter. It has a spectrometer with 1024 channels (each 61 KHz) and is able to record many radio sources in the Universe, with a theoretical flow of at least 5 Jy. Price available upon request.

Their SPIDER 230C Compact Radio Telescope measures 2.3 meters and is priced at U$16K, from what I can determine from reading the literature it features the same receiver and software; dish diameter and mount capacity being the only difference, along with beam width and sensitivity.

The mesh on their dishes is good up to 5 GHz but the feedhorn normally supplied is for 1.42 GHz, I imagine that they are willing to do some amount of customization.

An explanation of the atmospheric window can be found here: "The Effects of Earth's Upper Atmosphere on Radio Signals", this image is from NASA's website: 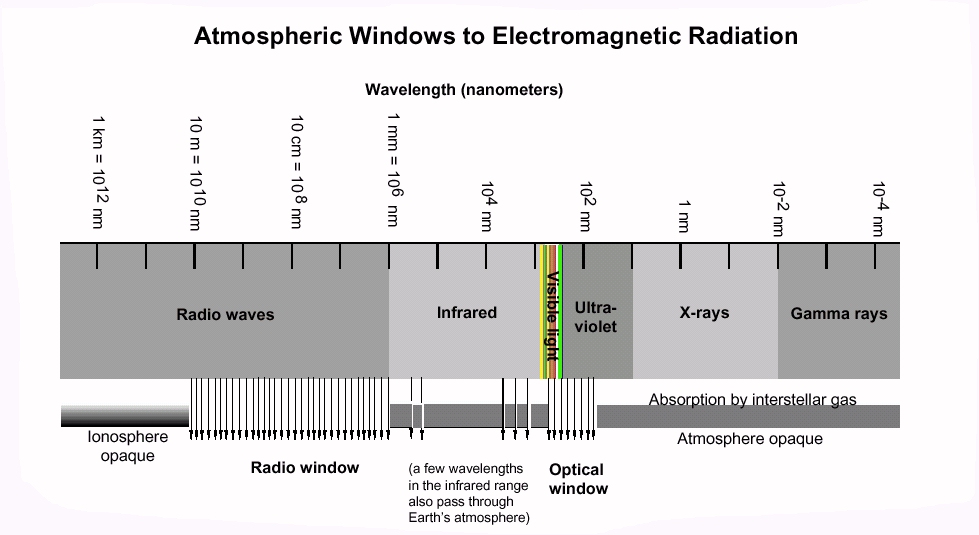 Question: From literature, I assume 3 cm is 10GHz, which should fall under either synchroton or free-free emission. But how do I know exactly?

3cm is 10 GHz and can be received with a 10 GHz receiver. The difference between synchrotron and free-free is explained on NRAO's webpages Free–Free Radiation and Synchrotron Radiation.

Acceleration by a magnetic field produces magnetobremsstrahlung, the German word for “magnetic braking radiation.” The character of magnetobremsstrahlung depends on the speeds of the electrons, so these somewhat different types of radiation are given specific names. Gyro radiation comes from electrons whose velocities are much smaller than the speed of light: $v≪c$. Mildly relativistic electrons whose kinetic energies are comparable with their rest mass $m_e⁢c^2$ emit cyclotron radiation, and ultrarelativistic electrons (kinetic energies $≫m_e⁢c^2$) produce synchrotron radiation.

Acceleration by an electric field accounts for free–free radiation, the resulting emission is called free–free radiation because the electron is free both before and after the interaction; it is not captured by the ion. If the ionized interstellar cloud is reasonably dense, the electrons and ions interact often enough that they quickly come into local thermodynamic equilibrium (LTE) at some common temperature, so free–free radiation is usually thermal emission.