How fast was the Earth spinning directly after the Moon formed?

I understand the Moon was perhaps five Earth radii away when it first formed (assuming it was formed by a giant impact of a Mars-sized body), and Earth has since transferred its rotational energy into the moon's orbital energy. How fast would Earth have been spinning at the point the Moon was formed? Assuming it was spinning very fast (day under 10 hours) would this have caused a noticeable decrease in effective "gravity" at the equator? Presumably the Precambrian microbes could have reached equatorial orbit really easily, assuming they had a space program.

We aren't positive that the Giant Impact hypothesis of Moon formation is correct. If we assume it is, we still don’t know how fast the Earth was rotating just after the collision.

If we could assume that energy was conserved from then to now, we could calculate the current energy of the Earth/Moon system and then estimate the rotation speed of the Earth when the Moon was in a near orbit. A previous attempt at this can be seen in the edit revisions for this question. Unfortunately, we can’t assume that energy was conserved since some was certainly lost to tidal heating.

Conservation of AM (Angular Momentum)

If we assume AM is conserved, according to Asphaug 2014:

If somehow brought together into one place, $\vec{L}_{EM}$ would equal the angular momentum of an Earth-mass planet spinning with a period of∼5 h—an anomalously large value that Cameron & Ward (1976) took to indicate a giant impact.

Here, $\vec{L}_{EM}$ is the combined angular momentum of the Earth/Moon system.

Is there a range of Earth rotation speeds possible?

Lock et. Al propose the possibility that the impact that created the Moon imparted so much energy that the resultant system exceeded the corotation limit (CoRoL), which is the hottest, highest AM system possible. They theorize the result would be a rapidly spinning vaporized torus of gas called a synestia instead of a planet. Here is a figure from their paper: 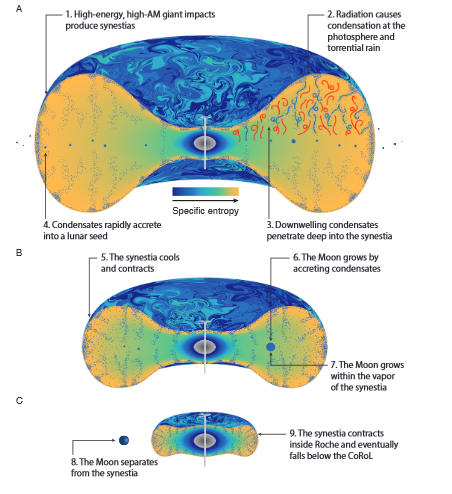 They talk about the synestia contracting and shedding angular momentum similar to how the accretion disk of our solar system is thought to have shed momentum as the Sun and planets were formed.

It may not make sense to think about the length of a day for a synestia. However, if Earth coalesced out of a synestia, StephenG calculated the fastest possible rotation rate for the Earth would yield a corresponding fastest day at a little under 1.5 hours: Why doesn't the Earth's rotation throw us off the surface?.

In conclusion, if the Moon was formed from a giant impact, an Earth day was probably somewhere between 1.5 hours and a bit more than 5 hours after the Earth had re-coalesced.

-4
Why doesn't the Earth's rotation throw us off the surface?
5
How do scientists know that Earth used to spin much more rapidly?
1
Moon’s orbit shift

3
Is the Earth Really Spinning? (honest question)
3
Length of a tidal day or by how much is the Moon late each day?
9
When the Moon formed and early on, did it orbit over the Earth's equator?
10
Why do we only see the clouds directly infront of the moon glow from moon light?
3
What is the nature of "rock vapor" in this description of the formation of the Moon?
4
If the earth stopped spinning what would happen to the moon
2
How high were the tides back when the Moon was much closer to Earth?
1
What happens if the Moon moves twice as fast?
2
Scholarly work on the gravitational disruption of a rocky planet by a close pass with another planet?
4
How to calculate the nodal precession range of the Moon with respect to the celestial equator?