How can a rotation period of a planet's satellite/moon be "chaotic" (like Hyperion around Saturn)?

According to wikipedia (see info below image) Hyperion's rotation period around Saturn is "chaotic".

What does that mean? The period (in days/hours) is different every rotation without any law helping to define it?

How can it be?

rotation natural-satellites
Share
Improve this question
edited May 12 '18 at 12:53

According to wikipedia (see info below image) Hyperion's rotation period around Saturn is "chaotic". What does that mean?

The wikipedia article refers to Hyperion's rotation being chaotic rather than its orbit about Saturn. I'll assume you are asking how Hyperion's axial rotation can be chaotic. (Its orbit is not.) 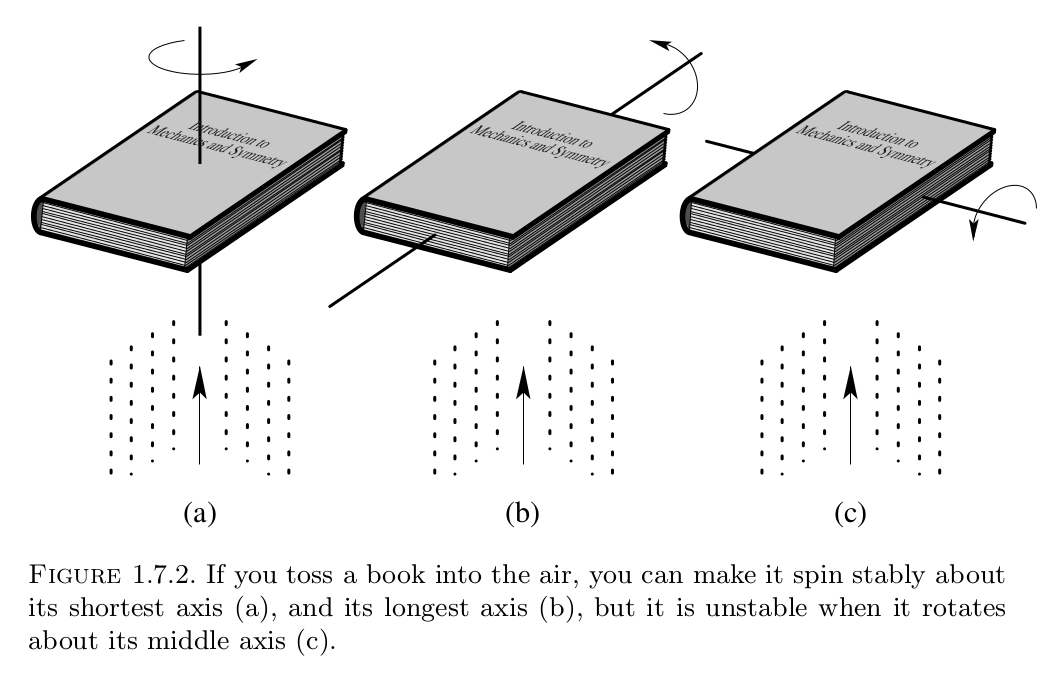 See the question Stability of rotation of a rectangular prism for details.

Hyperion is small enough and rigid enough that it's not quite capable of pulling itself into a roundish shape by its self gravitation. It instead has a markedly triaxial shape. Designating the principal moments of inertia as $A < B < C$ (corresponding respectively to the rotations in subfigures b, c, and a in the above image), the longitudinal libration parameter $(B-A)/C$ is about 0.21 for Hyperion. That's huge, and is a key factor that makes Hyperion's rotation chaotic. If Hyperion was a perfectly rigid body that wasn't subject to external torques and was instantaneous rotating about an axis close to that depicted as c in the above figure, it's rotation would essentially be chaotic.

None of the above conditions is true. Hyperion is not perfectly rigid and it is subject to external torques. Almost every regular moon in the solar system exhibits synchronous rotation and revolution. This is a result of tidal torques on the moon by the parent planet and the moon exhibiting a bit of plasticity (non rigid behavior) in response to those torques. The torques coupled with the plasticity are the mechanism by which those moons eventually became tidally locked.

There are other possible spin:orbit couplings than the 1:1 coupling exhibited by those tidally-locked moons. Mercury, for example, is gravitationally locked with the Sun in a 3:2 spin-orbit resonance. Mercury has a rather low longitudinal libration parameter of about $10^{-8}$. The high eccentricity of Mercury's orbit together with its nearly spheroidal nature makes it more likely to have been captured in the observed 3:2 spin-orbit resonance than in a 1:1 resonance.

With most moons and planets/exoplanets that orbit sufficiently close to the parent planet or star, the torque, plasticity, and low longitudinal libration parameter will eventually result in the orbiting body slipping into one of those small integer resonances. This is very unlikely to happen with Hyperion thanks to that very large longitudinal libration parameter. When Hyperion's spin and orbit happen to get close to a small integer ratio, the torque from Saturn is more likely to kick the moon into a rotation that is further away from the two stable axes than toward either one. It tumbles away from the resonant spin.

Not the answer you're looking for? Browse other questions tagged rotation natural-satellites or ask your own question.

5
Moons with synchronous rotation in our solar system

1
What effect does a natural satellite have on a planet's rotation and revolution?
4
How would a small TCO (temporarily captured orbiter) or other natural Earth satellite most likely be detected?
5
How does the dense atmosphere of Venus affect the planet's rotation?
7
Is there a timekeeping word for the orbit of a moon?
1
Cycles that are longer than the year, but less than 1000 years
2
Rendering asteroid orientation as seen from Earth
2
What would a moon with a six-month orbital period look like from the earth?