Why are Mars northern/southern hemisphere altitudes so different?

...and I can't shake the impression that someone just messed up the placement of the center point of the planet, shifting it about 8km north from where it should be. If the center point was ~8km further south, the north and south altitudes would be roughly the same. Moreover, it's even hard to argue about placement of equator, as the northern pole is about 16km closer to the equatorial plane than the southern - due to the altitude difference. Move the equator and it all evens out.

It's fairly hard to believe such a mistake to have persisted so long, so... is there any deeper reason behind this strong asymmetry of the planet, other than just a topographical snafu?

mars topographic-map
Share
Improve this question
asked May 21 '18 at 10:33

The placement of the center of the map is messed up, but it's nobody's mistake. From chapter 4 of The Surface of Mars:

The elevation difference between the two hemispheres offsets the planet’s center of figure from its center of mass by 2.986 km as measured along the polar axis

As explained in another answer, the altitude is defined based on Mars' center of mass.

Regarding the question that is in the title ("Why are the hemispheres so different?"), this sharp contrast between the Northern and Southern hemispheres is known as the Martian dichotomy.

The elevation on Mars follows a bimodal distribution. That is most of the land is either 4 km under the mean altitude or 1.5 km above the mean altitude. But not only is the altitude different between the two hemispheres, but the crustal thickness and the number of impact craters are also very different.

There are several competing hypotheses to explain the dichotomy. Here are a few.

Part of the crust was overturned

Very early in the history of Mars, there was a magma ocean that crystallized. Solomon et al. (2005) suggest that the top the mantle ended up denser than what was underneath, and it flipped.

There used to be active margins

By analogy with the dichotomy seen on Earth between oceans and continents, Sleep (1994) suggests that the northern hemisphere may be the result of new crust being generated and spreading from the center. The limit between the two areas would have been an active margin, similar to the Andes where the oceanic crust drops under the continental crust. 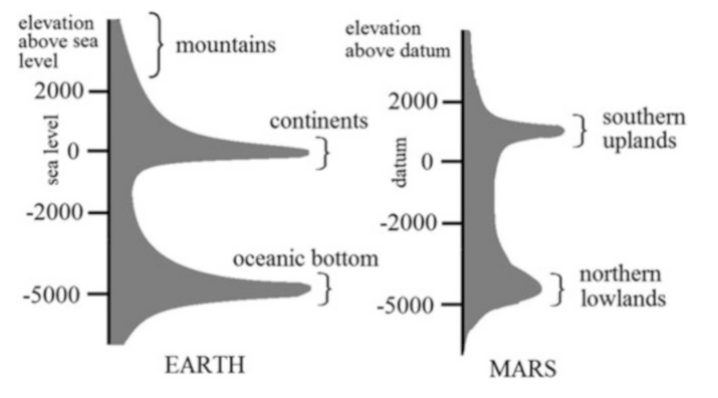 However, this would result in the formation of magnetic stripes that are observed in the southern rather than in the northern hemisphere.

Thermal convection in the mantle

As suggested by Zhong and Zuber (2001), there might have been strong convection in the mantle with a single convection cell.

These models succeed in reproducing some differences between the two hemispheres.

A giant impact in the northern hemisphere

Wilhelms and Squyres (1984) suggest that a giant impact very early in the history of Mars might have caused the northern depression. They also indicate the location of the impact.

However, no thinning of the crust has been found there, like what is observed for younger and smaller craters. The ring deposits that such an impact would have created are missing. The edge of the northern plains are very irregular, when impact craters tend to be somewhat circular.

A giant impact in the southern hemisphere

A few not quite as giant impacts

Explaining the irregular boundary between the two areas is rather difficult with a single impact, so Frey and Schultz (1988) suggest that a few big impacts might have caused the peculiar geography of Mars.

However, this hypothesis doesn't completely explain why the impact basin isn't circular.

So the question of the martian dichotomy is still open and doesn't have a definitive answer yet.

One part of your question could be paraphrased "why do we measure altitude on Mars the way we do". As you observe we could redefine the ellipsoid of zero altitude to much more closely fit the planet by moving it South a bit. The answer is based on the gravity. 0 altitude is on a surface of constant gravitational potential energy, which was originally determined in terms of atmospheric pressure, but more recently by direct gravity measurement.

The other part might ask why this is in terms of the history of Mars. I don't think there is a definitive accepted answer, but I'll leave that for someone else.

Not the answer you're looking for? Browse other questions tagged mars topographic-map or ask your own question.

1
Why is Mars' atmosphere so thin?
5
What are the cloud-like blobs in the Martian southern hemisphere?
5
Are there naturally radiation shielded areas on Mars? (shadowed by terrain formations)
4
What are these dark spots on Mars' north pole?
3
How are mars years counted?
0
Does Mars' “Northern ocean” have another name? What about the “Inland Sea”?
2
Why are cirrus clouds more common on Mars?
10
Why is ice on Mars not covered in dust?
45
Why is Mars cold?
7
Are meteors visible on Mars?