Hypothetically, would we be able to see the moon from Saturn's North Pole?

Hypothetically speaking, if Saturn had a solid surface that we could stand on, would we be able to see our Moon from the North Pole of Saturn? Would the rings of Saturn obstruct the view?

First of all, at that distance seeing the Moon and seeing the Earth amounts to the same thing. At its closest, Saturn is around 3000 times as far from Earth as the Moon is, so viewed from Saturn, the Moon is never more than about a minute of arc away from the Earth.

If you can see Earth from the North Pole of Saturn, you can see the Moon, also. (Though it would be a lot dimmer.)

But if you can See the Earth from Saturn's pole, then you can also see Saturn's pole from Earth. So your question can equally well be phrased as "Can Saturn's north pole be seen from Earth and if so, when?"

So the answer is that during most of Saturn's orbit around the Sun, the rings would not obscure the sightline from Saturn's north pole to the Moon.

Yes, if you observe Earth and the Moon at a favorable time. Near a Saturn summer solstice, e.g. between 2012 and 2022, Earth appears well above the horizon from Saturn's north pole. If the planet body is out of the way, so are the rings.

The other observability issue is Earth's elongation from the Sun. This reaches a maximum of about 6$^\circ$ at intervals of about 189 days, e.g. late September 2018 or early April 2019. Even then, you would need to shade your optics from the Sun and be above Saturn's atmosphere.

For these kind of questions, you might want to use Stellarium, a free open source planetarium.

You can specify the location of the observer on many celestial bodies, including Saturn. 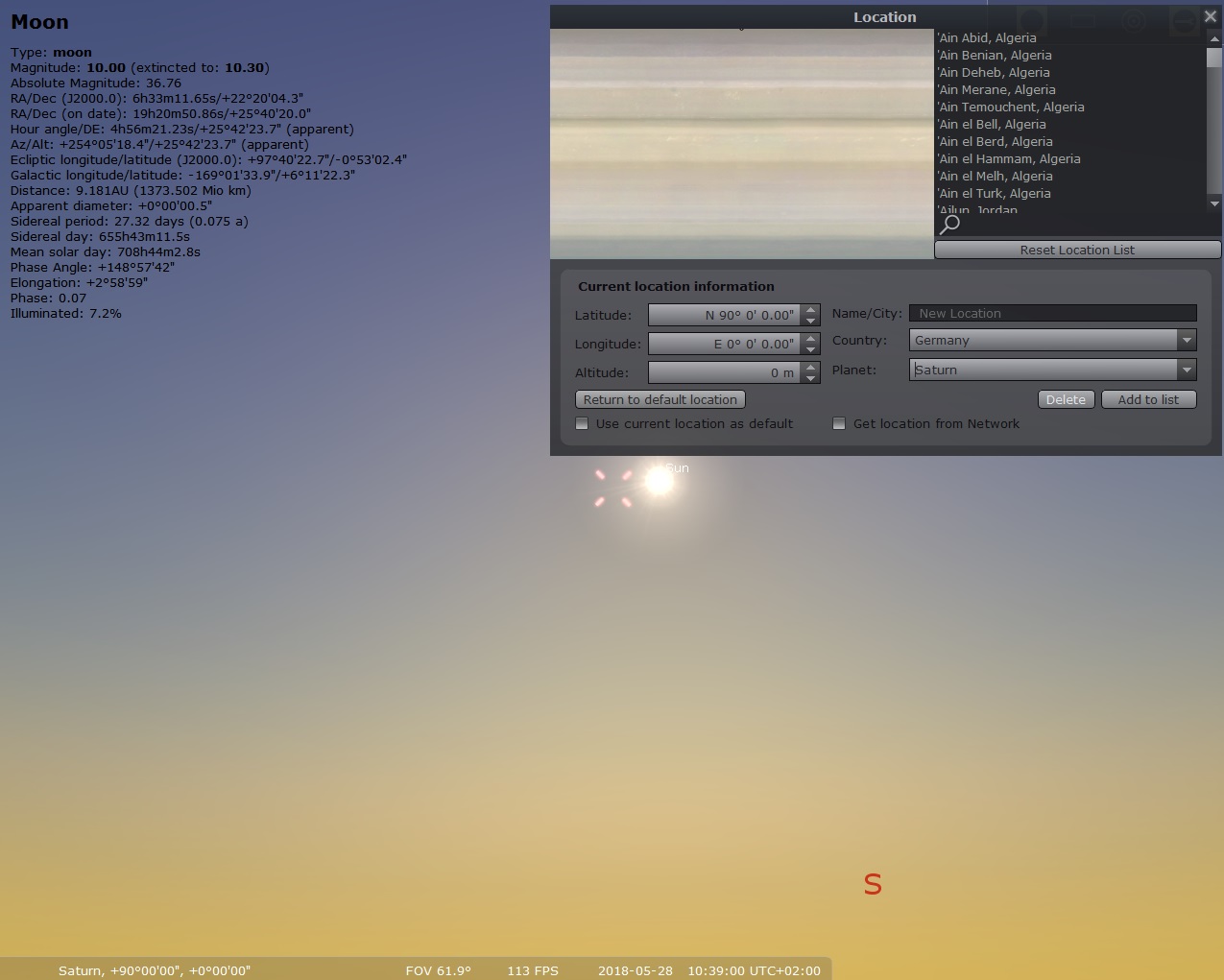 During a Titan transit

What we call a Titan transit is basically a solar eclipse for Saturnians. During this time, it should be much easier to observe Luna from Saturn. 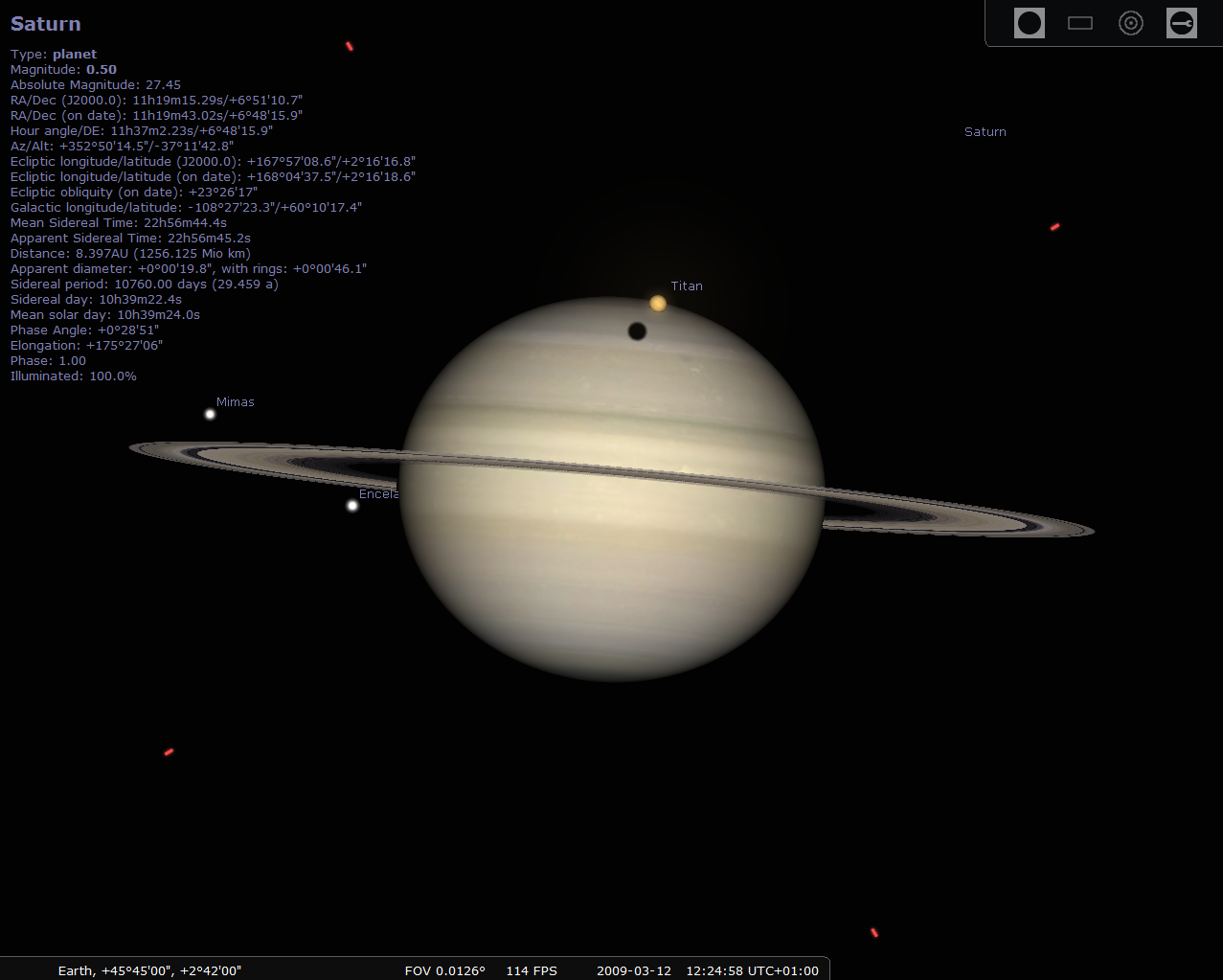 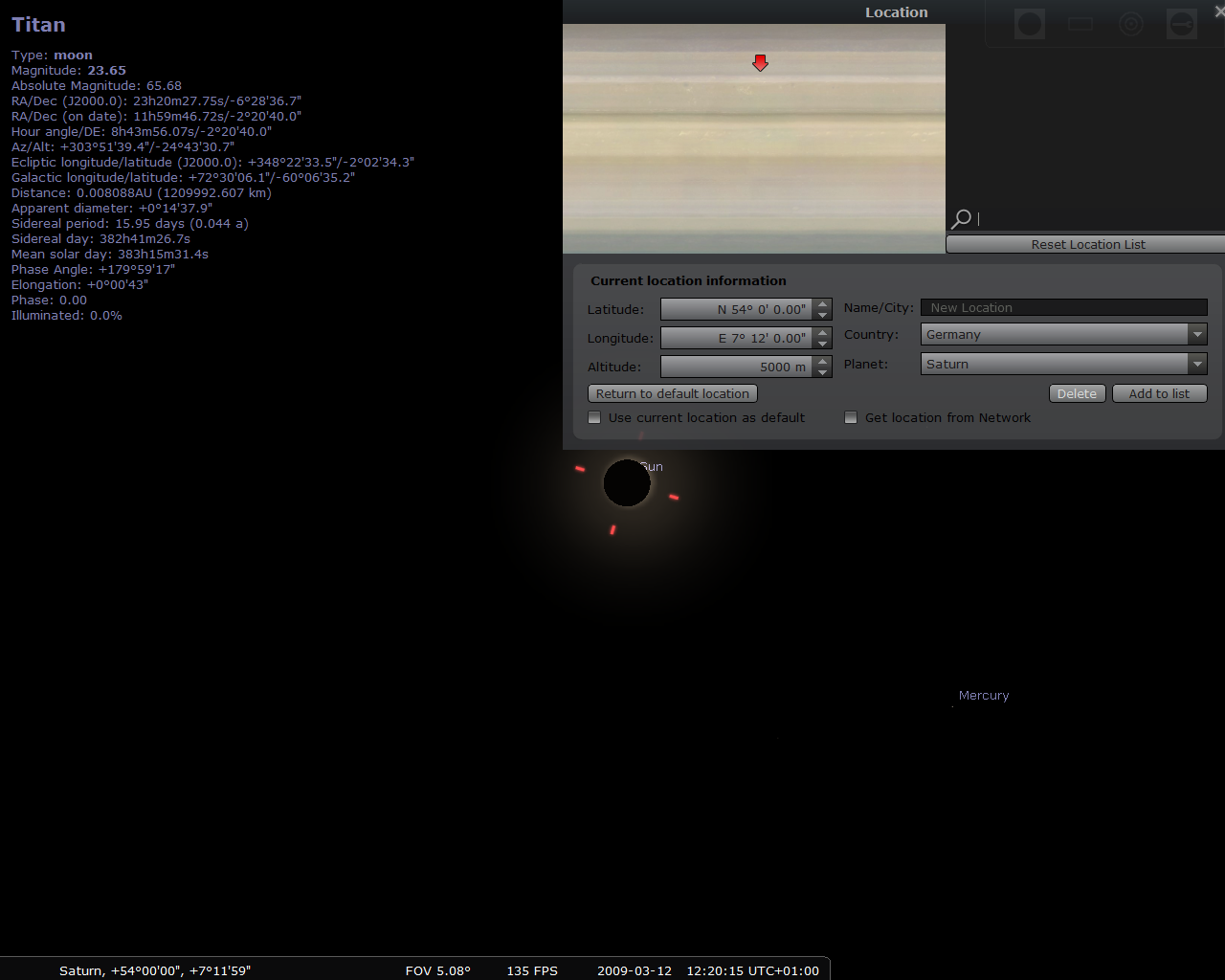 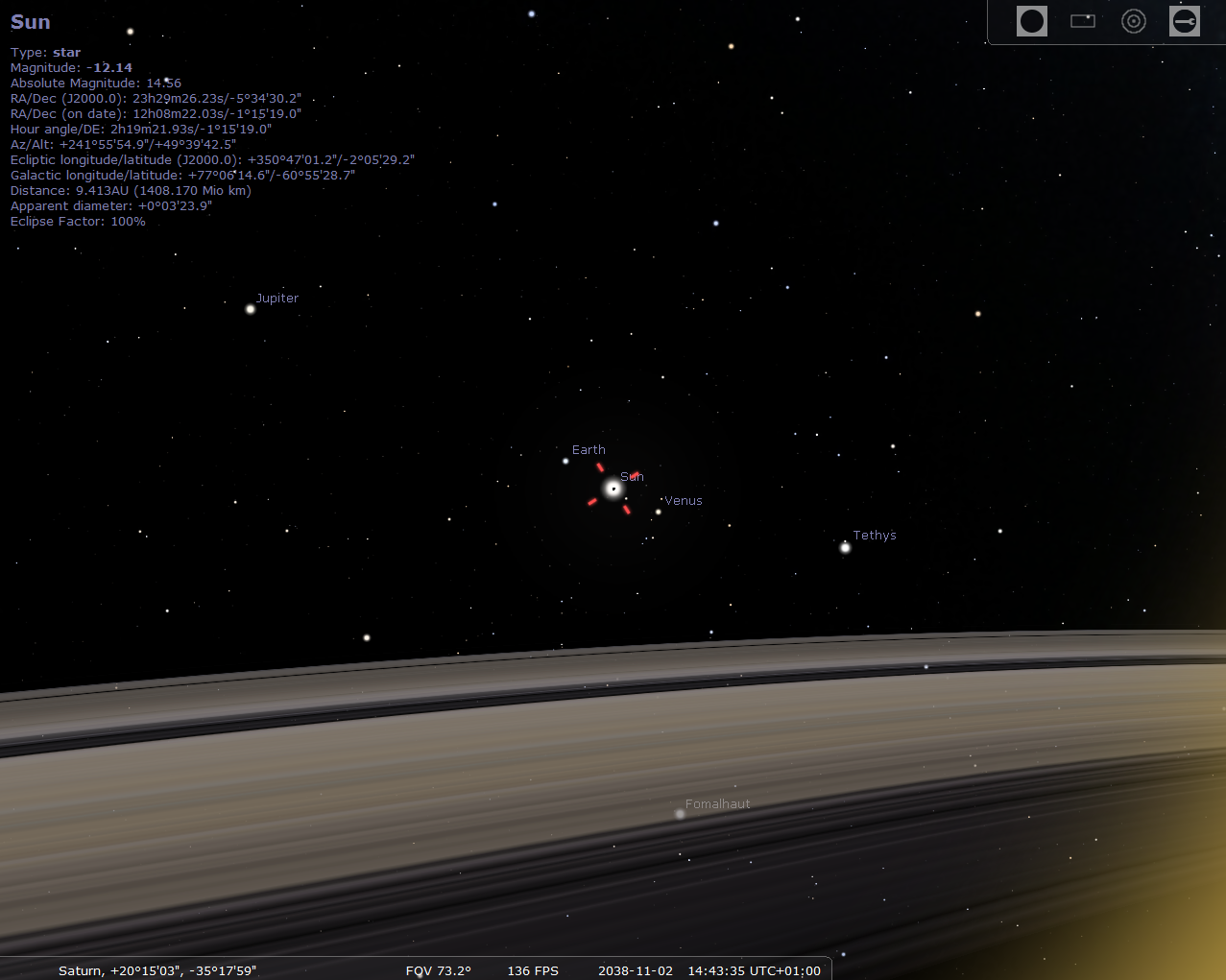 On the 2nd of November 2038 at 15:45 UTC, a Titan transit will occur in the northern hemisphere. Luna will be almost full as seen from Saturn.

Depends on whether you mean "unobstructed line of sight" or "can actually make out with the naked eye". The other answers have answered the first question, but I think it's worth pointing out the human eye has a resolution of about 10^-4 radians. Saturn is about 1.2 x 10^12 meters away, which means that the moon is about 1.2 x 10^12 meters away from Saturn. The diameter of the moon is about 3.4 x 10^6 m, so the moon is about 3 x 10^5 moon diameters away from Saturn. We can therefore approximate the apparent size of the moon as 1/(3 x 10^5), or 3 x 10^-6, radians, making it about 1/30 the size necessary to be seen from Saturn. Which is not as large of a margin as I thought, so I'm wondering whether there's an error somewhere.

23
Why do some planets have rings?
22
How long do planetary rings last?
8
How unusual is the solar system?
4
Can you see city lights on the Moon from Earth?
11
How easy would be to see the Moon from Mars?
9
Which Saturn satellite passes closest to Saturn's rings and at what distance?
8
What is the highest angle the moon ever makes above the horizon at the North Pole?
2
Can we see the south Pole of the Moon standing on North Pole of the Earth
4
Can planetary rings form as a result of solidifed lava thrown up by volcanoes on the surface of small rocky moons/planets?
1
Sky viewer from the moon