There are various good models for solid-body tides on the Earth. Are there any recommendations for tides on the Moon?

There are various good models for solid-body tides on the Earth. Are there any recommendations for tides on the Moon?

This answer starts with simplistic explanations and links with trivial calculations and progresses to links that, along with their references, provide exacting and lengthy approaches. @scb, you might want to skip halfway through the answer.

To make accurate calculations one needs to know about various parameters of the moon: composition of the crust and internal structure of the moon, Love numbers, precession, tidal acceleration, even time dilation - each results in a tiny error if omitted, a larger error if you skip them all.

An explanation of the anomalies of the Moon's crust is offered in Space.com's article: "Mystery of Moon's Lumpy Gravity Explained".

A particularly poor calculation is offered on this NASA webpage "SP-345 Evolution of the Solar System - 9. SPIN AND TIDES". It leaves out a lot (like Love numbers, precession, tidal acceleration, etc.) providing a quick and easy calculation along with a bit of unknown inaccuracies.

A short and quick explanation, less than you asked for, is provided by Space.com's article: "Moon Bumps: Earth's Gravity Creates Lunar Bulges" which explains:

"Earth's gravitational pull is so powerful that it creates a small bulge on the surface of the moon. ... The corresponding distorting effect on the moon, called the lunar body tide, is more difficult to see, because the moon is solid except for a molten core. But Earth's pull raises a small bulge about 20 inches (50 centimeters) from the surface on the near side of the moon and a matching bulge on the far side. [Rob's additional comment: they won't be equal.]

The same side of the moon always faces Earth, but the bulge does move around a few inches over time, wobbling and following Earth's pull like a magnet, as the moon shifts slightly during its orbit.

Scientists observed the lunar body tide using NASA's Lunar Reconnaissance Orbiter satellite, which is mapping the height of features on the moon's surface, and NASA's Gravity Recovery and Interior Laboratory satellite, which is mapping the moon's gravitational field. The satellites measured the height of 350,000 locations spread across areas of the moon closest to Earth and areas of the moon on the opposite side from Earth. The satellites passed over each location several times, so scientists could compare the height of each spot from one satellite pass to the next. By identifying which spots changed height, the researchers could track the lunar tide.".

A detailed calculation of the shape of the moon with plenty of math is covered in: "Evidence for lunar true polar wander and a past low‐eccentricity, synchronous lunar orbit". While covering a vast number of factors affecting the shape of the moon today body tides is amongst the points covered:

As first noted 200 years ago by Laplace, the Moon's rotational and tidal bulges are significantly larger than expected, given the Moon's present orbital and rotational state. This excess deformation has been ascribed to a fossil figure, frozen in when the Moon was closer to the Earth. However, the observed figure is only consistent with an eccentric and non‐synchronous orbit, contrary to our understanding of the Moon's formation and evolution. Here, we show that lunar mascons and impact basins have a significant contribution to the observed lunar figure. Removing their contribution reveals a misaligned fossil figure consistent with an early epoch of true polar wander (driven by the formation of the South Pole‐Aitken Basin) and an early low‐eccentricity, synchronous lunar orbit. This new self‐consistent model solves a long‐standing problem in planetary science and will inform future studies of the Moon's dynamical evolution and early dynamo.

The long‐wavelength lunar figure is triaxial, due to the combination of rotational deformation (which creates a rotational bulge) and tidal deformation (which creates a tidal bulge along the Earth‐Moon axis). However, it has been known since Laplace [1878] that the observed deformation is significantly larger than the predicted deformation assuming hydrostatic equilibrium and the Moon's current orbital and rotational state (Figure S1). This difference has been ascribed to the presence of a fossil figure, frozen in when the Moon was closer to the Earth and the rotational and tidal potentials were larger [Sedgwick, 1898; Jeffreys, 1915; Lambeck and Pullan, 1980]. More recent work by Garrick‐Bethell et al. [2006] has shown that the observed deformation not only requires freezing the fossil figure while on an orbit with a smaller semimajor axis, but also with significant eccentricity. Matsuyama [2013] extended this work by taking into account the effect of finite lithospheric rigidity; however, the required initial orbital eccentricity remains large.

That article includes many references which explain how the numerous equations were derived. As this illustration shows the article covers the development of the Moon's shape throughout history and attempts to calculate the minute bulging more exactly than the links referred to at the start of this answer. 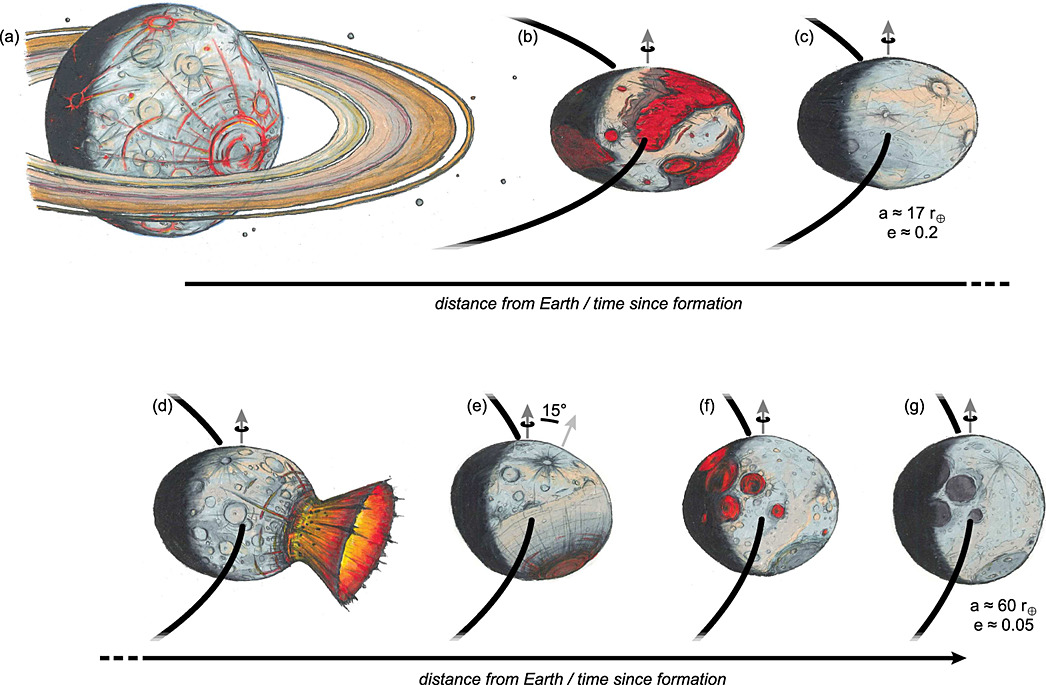 "Figure 3. Our proposed model for the formation of the Moon's fossil figure. (a) The Moon coalesced from the debris of giant impact. (b) Under the action of tides, the Moon migrated outward and cooled from a magma ocean, perhaps experiencing periods of non‐synchronous rotation or high eccentricity. (c) As the moon cools, it forms an elastic lithosphere capable of supporting long‐term deformation, resulting in the fossil figure. (d–e) The South Pole‐Aitken (SPA) basin forming impact occurs, resulting in ~15° of reorientation, placing SPA closer to the south pole. (f) Subsequent large impacts and mare volcanism occur but do not significantly alter the lunar figure. (g) Ultimately, the Moon migrates to its current orbital configuration.".

That website has moved, it's current address is: https://ssd.jpl.nasa.gov/?horizons - a bit of searching there turns up this URL: Lunar Constants and Models which says:

Summary: The primary purpose of this document is to provide a single source for the constants and models to be used in the trajectory and navigation design of missions whose objective is to orbit or land on the Moon. A secondary objective is to provide the mission analyst with some basic background information about the Moon, its orbit, and the previous missions that have explored the Moon. As a result, this document contains more information than the typical constants and models document. Some of the data are required for mission studies while other data are simply provided for "educational purposes". this document provides only brief descriptions of the constants and models. The user should consult the references if more detailed information is desired.

So that last list of references is "build your own rocket and land on the moon" accurate.

Not the answer you're looking for? Browse other questions tagged the-moon tidal-forces or ask your own question.

8
Exactly what in Saturn has been located to within 4 km precision?

17
If the moon wasn't receding from Earth, what would be the impact on the weather and tides?
20
Why is the Moon receding from the Earth due to tides? Is this typical for other moons?
3
Why are tides biggest during the equinoxes?
5
Why are tides high only on a full moon day?
8
How strong are the tides raised by Io on Jupiter relative to the ones raised by the Moon on Earth?
10
Does Saturn raise tides on Titan's lakes?
2
How high were the tides back when the Moon was much closer to Earth?
23
If we replaced the Moon with Ceres, how close would Ceres have to orbit to cause the same tides?