Is it practical to build a giant telescope in Moon? (Considering the fact that the atmosphere of moon is very rare) 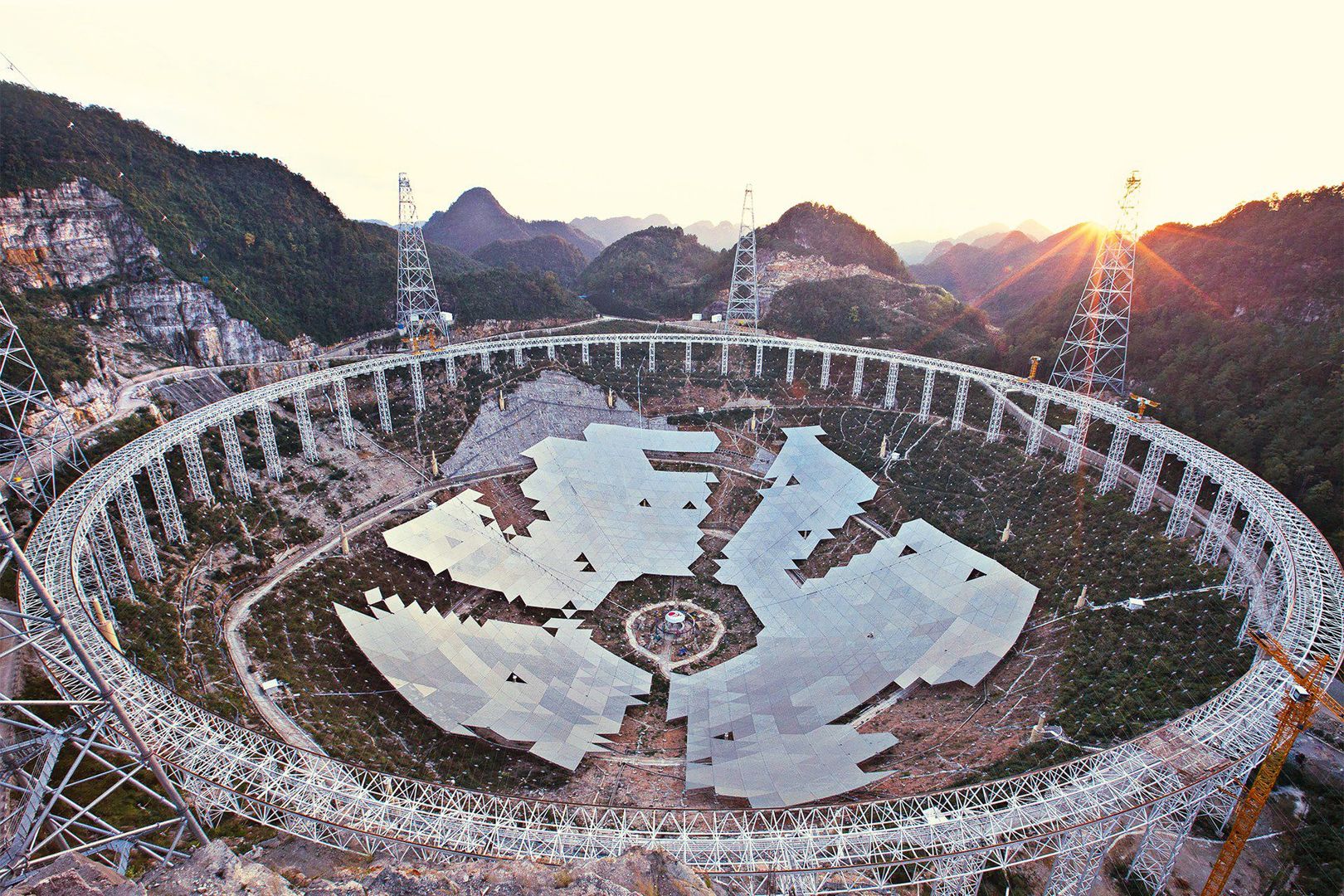 As we all know Space Telescopes are better than Earth-Based telescopes always.(Hubble space telescope was such a tremendous success)Even though ground-based observatories are usually located in highly elevated areas with minimal light pollution, but still they contend with atmospheric turbulence, which limits the sharpness of images taken from this vantage point.

What if all the space agencies collaborate together to build a telescope half the size of China's FAST in moon(Even smaller than half),even then it will be more powerful than the "FAST" right(because the atmosphere of moon is very less dense)?Will it be impractical?It may take decades to build one but still the outcome will be huge(We may even look and find aliens!!)

(Taking in account that Elon Musk is already planning Colonization of Mars)This project looks somewhat tamable than that,right? Is there a possibility of this happening? Is it feasible enough?

It's very unlikely that large optical telescopes will ever be built on the Moon, because the Moon is almost the worst possible place to build them. (The surfaces any of the planets other than Earth are worse.) It has no particular advantages over orbit and costs a lot more to build there.

The Moon looked like a good location when observatory technology was film-based, because observatories required people and people needed a base to live in and work best under gravity. But we now have the technology to shade an orbiting telescope from the Sun, point it exquisitely accurately, and take endless photos without changing the film -- all in orbit. Orbit is easier to get to than the Lunar surface -- even the Webb (should it ever launch) which will be parked a million miles from Earth, is easier to get to than the surface of the moon.

If we had the space capabilities to build a giant reflector on the Moon, we could build an even bigger and better one in orbit for the same cost.

But even there, it seems likely that any space radio telescope would be a large array of radio telescopes joined to form a giant synthetic aperture, and that would almost certainly want to be much larger than earth-based instruments -- for which the Moon is already too small.

There are advantages and disadvantages.

Earth based telescopes have disadvantages because of the atmosphere, which blocks some light and it blocks some wavelengths almost completely and it also bends the incoming light. Some of the atmospheric displacement can be fixed with modern computers, so Earth based telescopes have improved significantly over the last 20-30 years, but they still have the disadvantage Earth's atmosphere blocking some of the light coming in from space. Today's Earth based telescopes are as good as Hubble (I read that somewhere) at least in the visible spectrum, in large part because of computerized imaging. When Hubble was launched (and fixed) at the time if was lightyears better than anything on Earth. Today it's close.

Chandra and Spitzer see in wavelengths that don't make it to Earth, so they need to be in orbit to work. James Webb will also view in the infra-red as well as visible wavelengths, so it needs to be in space to take advantage of it's infrared imaging.

Space is much better because it gets a much cleaner picture and it receives all wavelengths. There are disadvantages to being in space too, like cosmic rays, solar storms and the occasional near-light-speed proton but on average, space is better than Earth and the surface of the Moon is similar to being in space due to there being essentially no atmosphere.

A big problem with telescopes in space is that launching that much material is very expensive. It costs about $10,000 per pound to launch something into space. That's why there's so few you can count space telescopes on your fingers (fingers and toes actually, I think there's 13).

The big advantage the Moon has is that it's full of silicon, which is what mirrors are made of, so by using lunar material, much less stuff needs to be launched and that saves a ton of money and increases the size of this theoretical telescope. That's the real advantage. We can't launch a 100 or 200 foot telescope from Earth because it's too big, but we could in theory, built one that size on the moon because there's lots and lots of stuff to use.

A smaller advantage is that the body of the moon acts as a shield for what's below it, but the real advantage is that the Moon is made of stuff that can be turned into a telescope. Really any large body a few miles in diameter would work, though working on a surface with gravity might be easier. Personally I think Ceres would be a great place to build. Very low gravity (but enough where you can set things down and not worry about them bouncing away) farther from the sun so a smaller sun-shield. Any reasonably large body in space could theoretically be used to build a telescope.

The moon, however, is closer, so it's both more easily repaired and it's close enough that it's easier to transmit images back to Earth as opposed to a Phobos based or Ceres based telescope.

This shouldn't be mistaken for easy though. It's never been done and might run into unanticipated problems and end up being quite difficult, but it's a nice idea.

This 2004 article although a little dated now, discusses the relative merits of three possible novel sites for new major optical/IR telescopes: Dome A in Antarctica, the South pole of the Moon, and the Earth-Sun L2 point (or an orbit around it). Each is best for different purposes. A particular attraction of the Lunar site is the ability to stare at the same part of the sky for very long periods to detect very faint objects.

Telescopes on the moon are a fantastic idea. If you "thought it up yourself" congratulations, because it's a great idea for the future.

As you may know we already have many fantastic telescopes in space (that is to say, generally orbiting or near our Earth). The next step would be telescopes on the Moon. (It is far, far, harder to build one on the moon, than simply lift one up to orbit.)

You can easily find many beginning studies about it; for example here is one by NASA on your great idea, from ten years ago!

Your idea is a good one, and hopefully it comes sooner rather than later. I bet we are 30 years away from telescopes on the moon. But they will come.

4
What kinds of technologies are required to directly image exoplanets
5
Claim that 30-m class telescopes will have resolution far superior to Hubble: true?
1
Could the Earth be used to cast an arago/poisson spot on something
2
Does the size of the atom limit the focal length of telescopes?
8
Where exactly is the modification that first corrected the spherical aberration in Hubble's primary mirror?
0
Reflector vs refractor in terms of magnification, which one wins?
0
Did the Spectr-R space-based radio telescope use on-board accelerometer to measure non-gravitational acceleration for baseline correction?