(1) With adaptive optics you can get 0.1 arc second resolution on the ground (admittedly only on a mountain top with particularly good air flow, but still!). This eliminates one of the major advantages of space until you get above several meters mirror diameter.

(2) Rocket fairings are the shrouds which protect payloads during the supersonic atmospherics speeds reached during launch. A 5 meter fairing is about the largest that can be flown, which limits the size of the one-piece mirrors which can be launched. (The Dreaded Webb Telescope's mirror is in pieces which will assemble themselves in space -- a very scary and very expensive piece of design.)

(3) Servicing a telescope on the top of Mauna Kea or in the high Chilean Andes is a difficult and expensive process. Servicing a telescope in orbit makes that look like small change. (Cost comparable to the cost of building a new giant scope on Earth.) And in-orbit servicing can't even be done with current technology except in low earth orbit.

(4) While high resolution is one frontier in astronomy, going deep is another, and going deep requires big mirrors. A 30 meter mirror on Earth gathers much more light than a 5 meter mirror in space. The giant terrestrial telescopes simply do a better job of being light buckets for spectroscopy than anything we can yet put into space.

The bottom line is that with the development of adaptive optics, space-based telescopes of currently buildable and launchable size lost their main advantage over ground-based telescopes. And since they're 10x to 100x the cost, they are simply not worth building for many purposes.

Space based telescopes still hold a significant edge in parts of the spectrum blocked by the atmosphere such as UV and IR (Webb), and for certain tasks involving long-term high accuracy photometry (Kepler) and astrometry (Gaia). But for general purpose use, the balance seems firmly on the ground's side for large telescopes.

This will change if space flight becomes cheaper -- the SpaceX BFR, for example, with its 9 meter fairing and dramatically lower launch costs, offers great hope for space telescopes.

In addition to Mark's great answer ...

If you had money for two homes, one near work and a 'summer cottage' in the woods, how would you divide your budget?

Yes, and I'm not a fan of those answers, perhaps @MarkOlson is also not impressed.

Those answers miss adaptive optics (dismissing it as expensive and not particularly effective) and the ability to easily upgrade everything except the size of the building and main mirror.

It's not so much "how much bigger", it's "effectively market your idea, secure as much funding as possible, and build the largest building with the biggest main mirror possible". Dig deep and build what you can, not be upgraded as big as you can - sensors and supercomputers can fix the rest.

Ground and space-based telescopes are useful, moon-based less so.

When we have "The Acme Telescope Company" open their first store on the moon the price to purchase will fall, until then Earth and space-based will be cheaper. With space-based it can meet you halfway for repairs, with ground based (even on the top of a mountain) a repair facility is often close at hand.

At Paranal the mirror maintenance building is located on the mountain top, near the mirrors.

The Scientific America article: Is the James Webb Space Telescope "Too Big to Fail?" explains:

“Assuming we make it to the injection trajectory to Earth-Sun L2, of course the next most risky thing is deploying the telescope. And unlike Hubble we can’t go out and fix it. Not even a robot can go out and fix it. So we’re taking a great risk, but for great reward,” Grunsfeld says.

There are, however, modest efforts being made to make JWST “serviceable” like Hubble, according to Scott Willoughby, JWST’s program manager at Northrop Grumman Aerospace Systems in Redondo Beach, California. The aerospace firm is NASA’s prime contractor to develop and integrate JWST, and has been tasked with provisioning for a “launch vehicle interface ring” on the telescope that could be “grasped by something,” whether astronaut or remotely operated robot, Willoughby says. If a spacecraft were sent out to L2 to dock with JWST, it could then attempt repairs—or, if the observatory is well-functioning, simply top off its fuel tank to extend its life. But presently no money is budgeted for such heroics. In the event that JWST suffers what those in spaceflight understatedly call a “bad day,” whether due to rocket mishap or deployment glitch or something unforeseen, Grunsfeld says there’s presently an ensemble of in-space observatories, including Hubble, and an ever-expanding collection of powerful ground-based telescopes that would offset such misfortune. 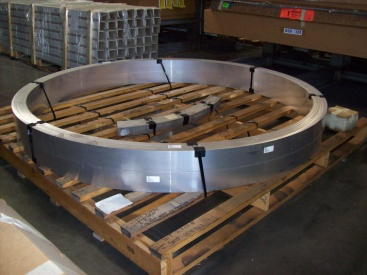 The completed primary mirror will be over 2.5 times larger than the diameter of the Hubble Space Telescope's primary mirror, which is 2.4 meters in diameter, but will weigh roughly half as much.

The James Webb Space Telescope will collect light approximately 9 times faster than the Hubble Space Telescope when one takes into account the details of the relative mirror sizes, shapes, and features in each design," said Eric Smith, JWST program scientist at NASA Headquarters, Washington. The increased sensitivity will allow scientists to see back to when the first galaxies formed just after the Big Bang. The larger telescope will have advantages for all aspects of astronomy and will revolutionize studies of how stars and planetary systems form and evolve.

... more distant objects are more highly redshifted, and their light is pushed from the UV and optical into the near-infrared. Thus observations of these distant objects (like the first galaxies formed in the Universe, for example) requires an infrared telescope.

This is the other reason that Webb is not a replacement for Hubble is that its capabilities are not identical. Webb will primarily look at the Universe in the infrared, while Hubble studies it primarily at optical and ultraviolet wavelengths (though it has some infrared capability). Webb also has a much bigger mirror than Hubble. This larger light collecting area means that Webb can peer farther back into time than Hubble is capable of doing. Hubble is in a very close orbit around the earth, while Webb will be 1.5 million kilometers (km) away at the second Lagrange (L2) point.

How far will Webb see?

Because of the time it takes light to travel, the further away an object is, the further back in time we are looking. 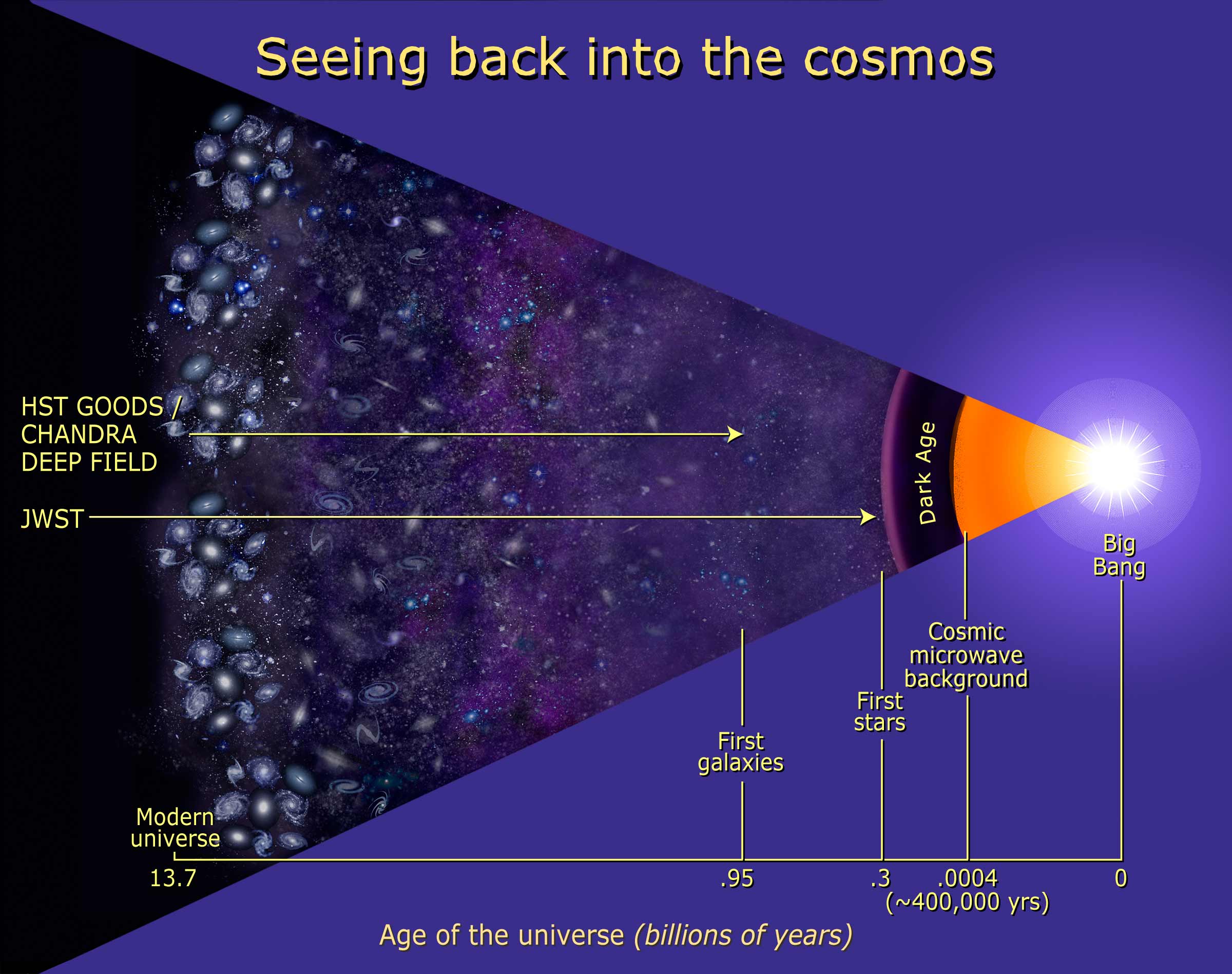 This illustration compares various telescopes and how far back they are able to see. Essentially, Hubble [HST] can see the equivalent of "toddler galaxies" and Webb Telescope [JWST] will be able see "baby galaxies". One reason Webb will be able to see the first galaxies is because it is an infrared telescope. The universe (and thus the galaxies in it) is expanding. When we talk about the most distant objects, Einstein’s General Relatively actually comes into play. It tells us that the expansion of the universe means it is the space between objects that actually stretches, causing objects (galaxies) to move away from each other. Furthermore, any light in that space will also stretch, shifting that light's wavelength to longer wavelengths. This can make distant objects very dim (or invisible) at visible wavelengths of light, because that light reaches us as infrared light. Infrared telescopes, like Webb, are ideal for observing these early galaxies.

"We develop the framework for one such method based on the self-coherent camera (SCC) to be applied to ground-based telescopes, called Fast Atmospheric SCC Technique (FAST). We show that with the use of a specially designed coronagraph and coherent differential imaging algorithm, recording images every few milliseconds allows for a subtraction of atmospheric and static speckles while maintaining a close to unity algorithmic exoplanet throughput. Detailed simulations reach a contrast close to the photon noise limit after 30 seconds for a 1 % bandpass in H band on both 0th and 5th magnitude stars. For the 5th magnitude case, this is about 110 times better in raw contrast than what is currently achieved from ExAO instruments if we extrapolate for an hour of observing time, illustrating that sensitivity improvement from this method could play an essential role in the future detection and characterization of lower mass exoplanets."

In short, sometimes they can completely remove the atmosphere. Improvements are coming.

Answering your subquestion about building on the moon: This is subject to the same launch costs and restrictions as a space-based 'scope, plus you have to deal with landing and with gravitational sag. So the first thing you need is a functioning moon base that can manufacture all components from local raw materials. Once that's in place (insert large laugh here), you'll still need adaptive optics (as do multi-element scopes like JWebb) for alignment and gravitational sag offsets, but as those are static, you don't need the high-frequency response required on Earth to handle atmospheric aberrations. You'll want to build on the "dark side" so that Terran light doesn't foul everything up.

Answer to telescopes on the moon. Being on the surface of the moon creates problems as compared to floating freely in space a long way from any planet/moon. Gravity distorts mirrors/mechanics, requires extra engineering to support weight, half sky is blocked by moon at any time, thermal emission from ground, temperature changes with day-night cycle, dust ...

The far side of the moon would be the best place to do low frequency radio observations. The moon blocks all the emissions from earth.

Not the answer you're looking for? Browse other questions tagged telescope space-telescope .

22
Why is Starlink polluting the night sky a big concern if we have space telescopes?
9
Do bigger telescopes equal better results?

11
What are the next planned space telescopes?
6
Can ground based telescopes use a starshade in space?
5
Are space telescopes completely out of the earth's atmosphere?
4
Constructing a periscope/telescope - trouble with lenses
8
Where exactly is the modification that first corrected the spherical aberration in Hubble's primary mirror?
3
How are space telescopes stabilised to a perfect standstill?
3
What are criteria to compare and evaluate different 12 inch truss Dobsonian telescopes?
10
Why are telescopes positioned in Lagrange points?
5
How many space telescopes are currently active?
2
Are there any space-based observatories that use interferometry?