Why moon sighted only in Kerala but not in rest of India?

I know for most of you the question may look silly, but Kerala is a state in India where the moon (Ramadan moon) will be sighted but not in rest of India.

I was reading the news article where I got a little hint but was not clear for me since I am newbie, tried to google but couldn't find much info :) can someone explain me.

Eid is likely to be celebrated in Kerala tomorrow. Due to the geographical location of the coastal state, the lunar moon is sighted in the state a day before the rest of India.

Here is the article link Moon sighted in Kerala

It looks like Kerala is on the west coast, so they may have been in the position to see the Moon in that 15 to 24 hour time range whereas it would have been too early for people further to the east to see it.

Kerala is also farther south than the rest of India. I have not done the calculations for this New Moon, but it is possible that being south and west increased the possibility of seeing the Moon before people further north or east would see it. If this is the case, then Kerala would have been in the best place to be the first to see the new Moon -- assuming the sky was clear :-).

The image shows that, according to the calculations by https://www.moonsighting.com/visibility.html, the new moon might be visible from only the far South-Western coast of India.

The visibility of a narrow crescent moon depends not only on the width of the crescent, but also on the difference between the moon's and sun's altitudes relative to the local horizon. The greater this difference, the darker the sky near the moon can be before it sets. Estimated moon visibility maps for 2018-06-14 by the UK Nautical Almanac Office and R H van Gent, based on a 1997 paper by B D Yallop, do not guarantee visibility anywhere in India but do indicate better chances to see it from Kerala. 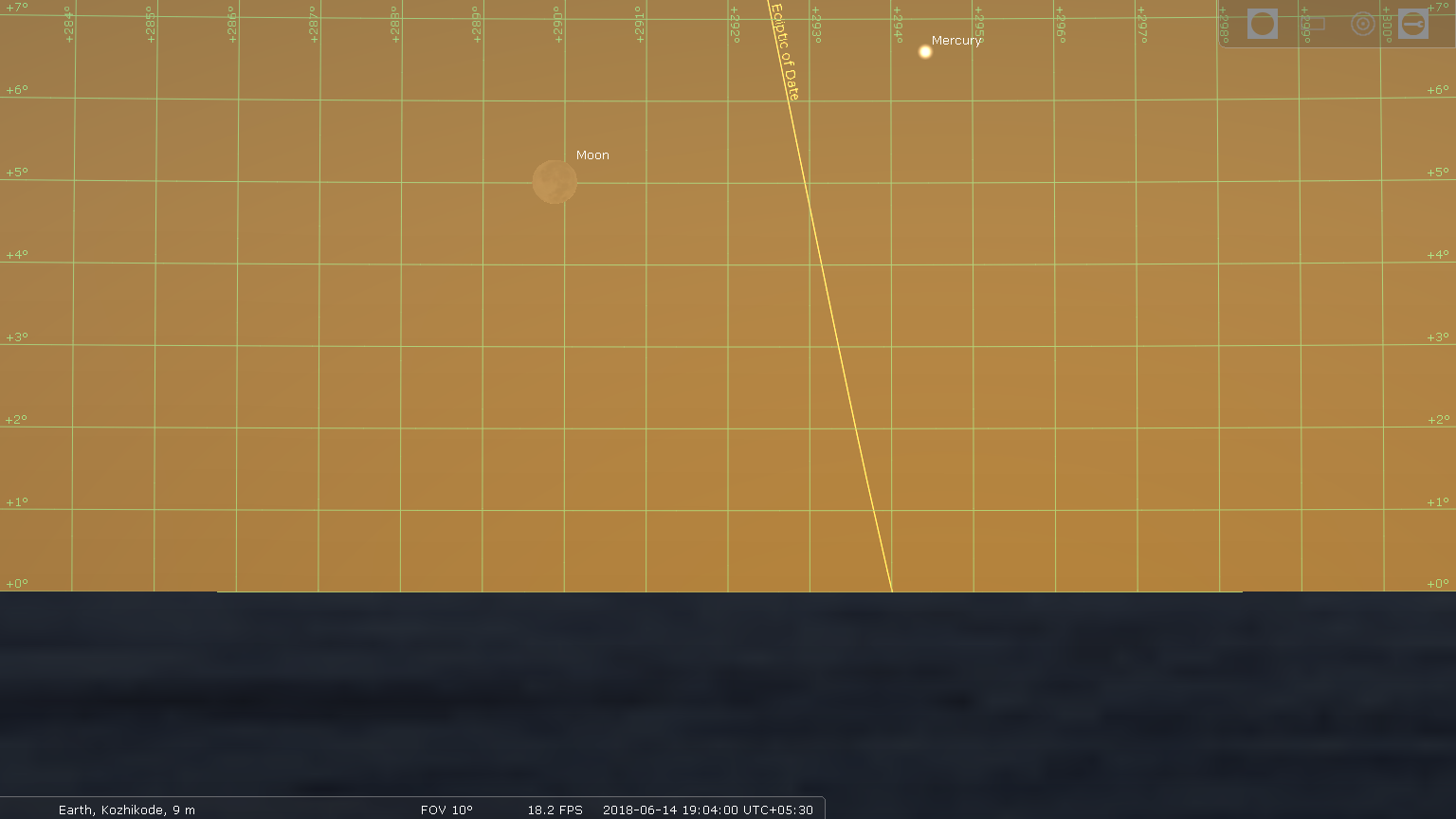 In Kozhikode (above) at 19:04 IST, the moon is 5 degrees above the horizon, and the sun is 4 degrees below the horizon, making the sky just dark enough for an experienced observer in good weather conditions to see the moon faintly.

In New Delhi (below), the sun in June sets half an hour later but descends at a shallower angle. At 19:31 IST, the moon is only 4 degrees above the horizon, and the sun is only 3 degrees below the horizon. The slightly older moon is slightly farther elongated from the sun and has a slightly wider crescent, but the lower altitude and brighter sky make it harder to see. 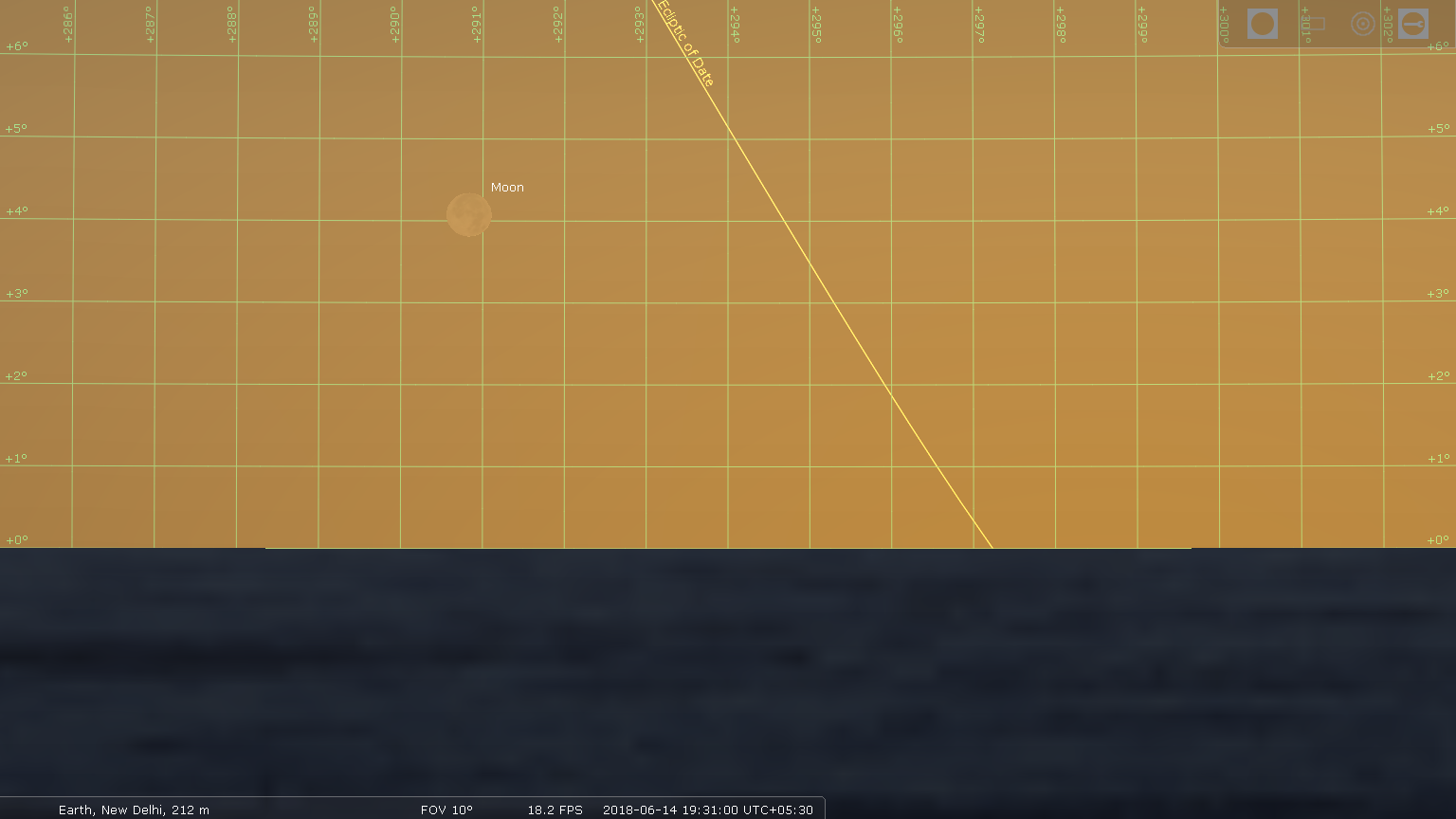 Not the answer you're looking for? Browse other questions tagged the-moon observational-astronomy moon-phases or ask your own question.

0
Waxing crescent moon
1
Ladakh India where the moon (Ramadan moon) is sighted but not in rest of India
1
Is it easier to see the young moon when it's closer to the sun?
1
First visibility of the moon

8
Is it possible for a person to not see the new moon at different places on earth?
9
Why can I see the whole moon during various non-full-moon phases?
8
Why do dark objects look white from a distance? (Moon, Ceres, but not Earth!)
6
Why can we see stars but not astronaut on the moon
7
Why can I see the dark side of the moon?
2
Why the moon is blinding me right now?
7
Can I see Harvest moon in India?