I'm not sure what does the last line actually mean..Can someone please elaborate more on this? I just simply take the $D_s$ as the "physical transverse size".

So I take this as the physical distance of the region from us. The next part is what confuse me:

How does a physical distance $rR_0$ comes into play in the angular diameter distance, because from its definition it is just $$D_A=\frac{\text{physical transverse size}}{\text{angular size}}$$??

How does a physical distance $rR_0$ comes into play in the angular diameter distance, because from its definition ...

The manner you choose to calculate it is explained on Wikipedia's "Angular diameter distance" webpage:

The angular diameter distance is a distance measure used in astronomy. It is defined in terms of an object's physical size, $x$, and $\theta$ the angular size of the object as viewed from earth.

Where $S_{k}(r)$ is the FLRW coordinate defined as:

Where $\Omega _{k}$ is the curvature density and $H_{0}$ is the value of the Hubble parameter today.

Notice how, even at a small $z$, the choice of cosmological model is important for full accuracy.

The ΛCDM (Lambda cold dark matter) or Lambda-CDM model is a parametrization of the Big Bang cosmological model in which the universe contains a cosmological constant, denoted by Lambda (Greek Λ), associated with dark energy, and cold dark matter (abbreviated CDM). It is frequently referred to as the standard model of Big Bang cosmology because it is the simplest model that provides a reasonably good account of the following properties of the cosmos:

The model assumes that general relativity is the correct theory of gravity on cosmological scales. It emerged in the late 1990s as a concordance cosmology, after a period of time when disparate observed properties of the universe appeared mutually inconsistent, and there was no consensus on the makeup of the energy density of the universe.

The ΛCDM model can be extended [tweaked to fix it, depending on what you are doing] by adding cosmological inflation, quintessence and other elements that are current areas of speculation and research in cosmology.

Some alternative models challenge the assumptions of the ΛCDM model. Examples of these are modified Newtonian dynamics, modified gravity, theories of large-scale variations in the matter density of the universe, and scale invariance of empty space.

The reason to nitpick about a tiny difference of opinion is because the distances involved are so enormous, and the difference really isn't so small either. Depending on the distance the amount of time that has passed means that the space through which the light is passing changes somewhat throughout it's lifetime.

The basic equations of cosmology are modified, showing an acceleration of the expansion after a certain initial period, the duration of which depends on the mean density of the Universe. Another major consequence of the scale invariance is that the laws of conservation of matter-energy show some dependence on the cosmic time. This dependence is very weak for models with a non-zero matter density, but at the conceptual level this is not a minor effect.

We do think it is worth to undertake the present exploration for two main reasons. One is that the recent cosmological results suggest that a totally unknown form of matter-energy, the dark energy, dominates the energy content of the Universe. This is a major problem. The other main reason is that scale invariance is not a kind of adjusted trick to make things work. But it is a basic physical change, that responds to the fundamental wish (Dirac 1973) that the equations expressing basic laws should be invariant under the widest group of transformations. 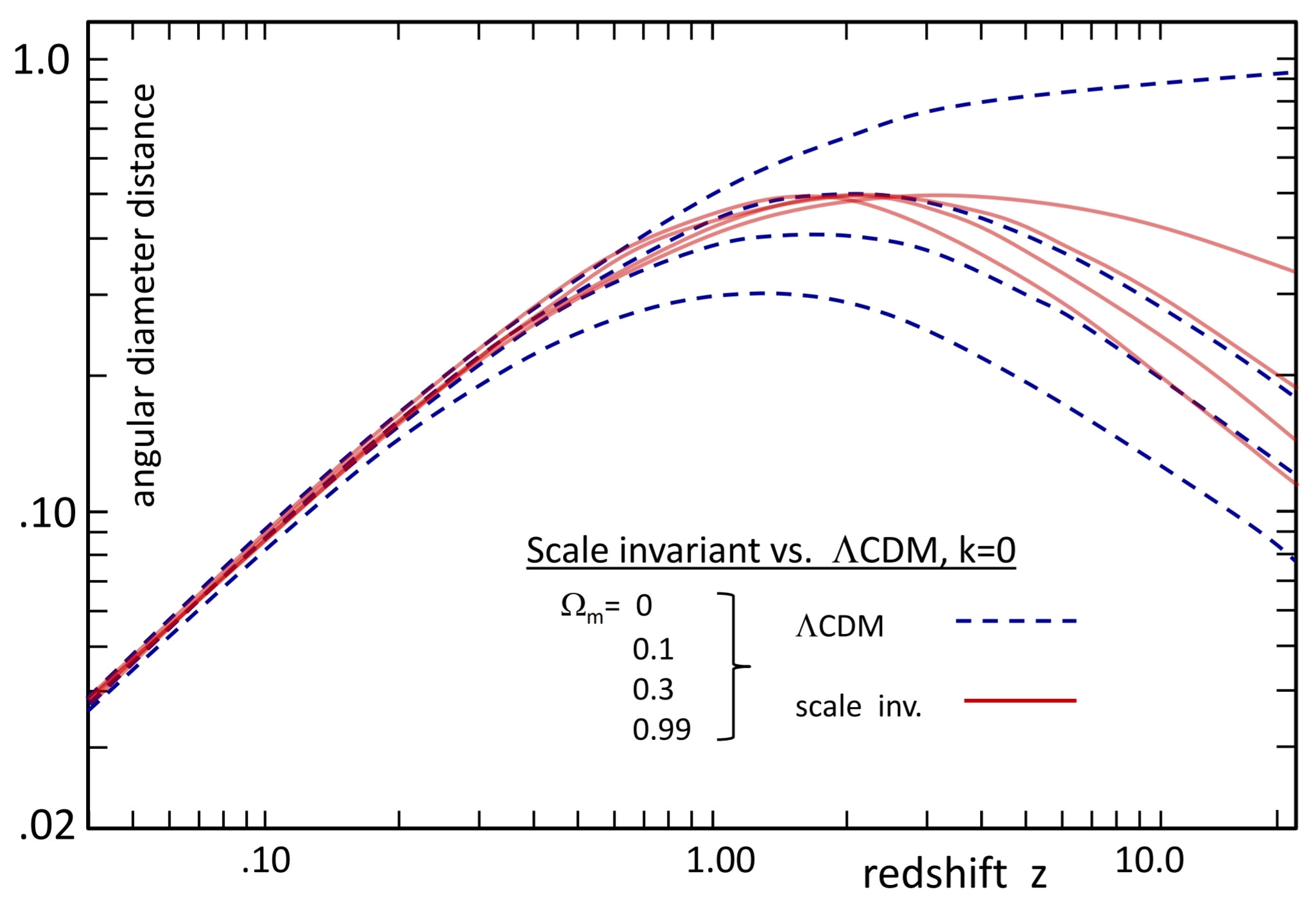 Please refer to that paper for details on the derivation of the calculations.

Not the answer you're looking for? Browse other questions tagged astrophysics cosmology expansion angular-diameter or ask your own question.