I'm currently writing a code to compute the two-point correlation function of a set of galaxies. As I work with a loooot of galaxies, it was suggested to me not to do it in real space, but to compute the power spectrum in Fourier space and get the correlation from the power spectrum, as is explained e.g. in appendix B in this paper (arXiv:1507.01948).

Unfortunately, it seems like I'm doing something wrong, and I don't know exactly what. For the FFT, I use the FFTW library, which as far as I see follows the same conventions concerning indexing and definition of the DFT as the numpy.fft library. If necessary, I'll gladly supply my full code and galaxy catalogues, but meanwhile, I'll describe it step by step:

Here is a plot of my results, the green lines being the observational data, while the blue/orange line are two different cases obtained from the mock galaxy catalogue (whether orphan galaxies are included or not). This particular image was created with an array of length $N=512$ per dimension. 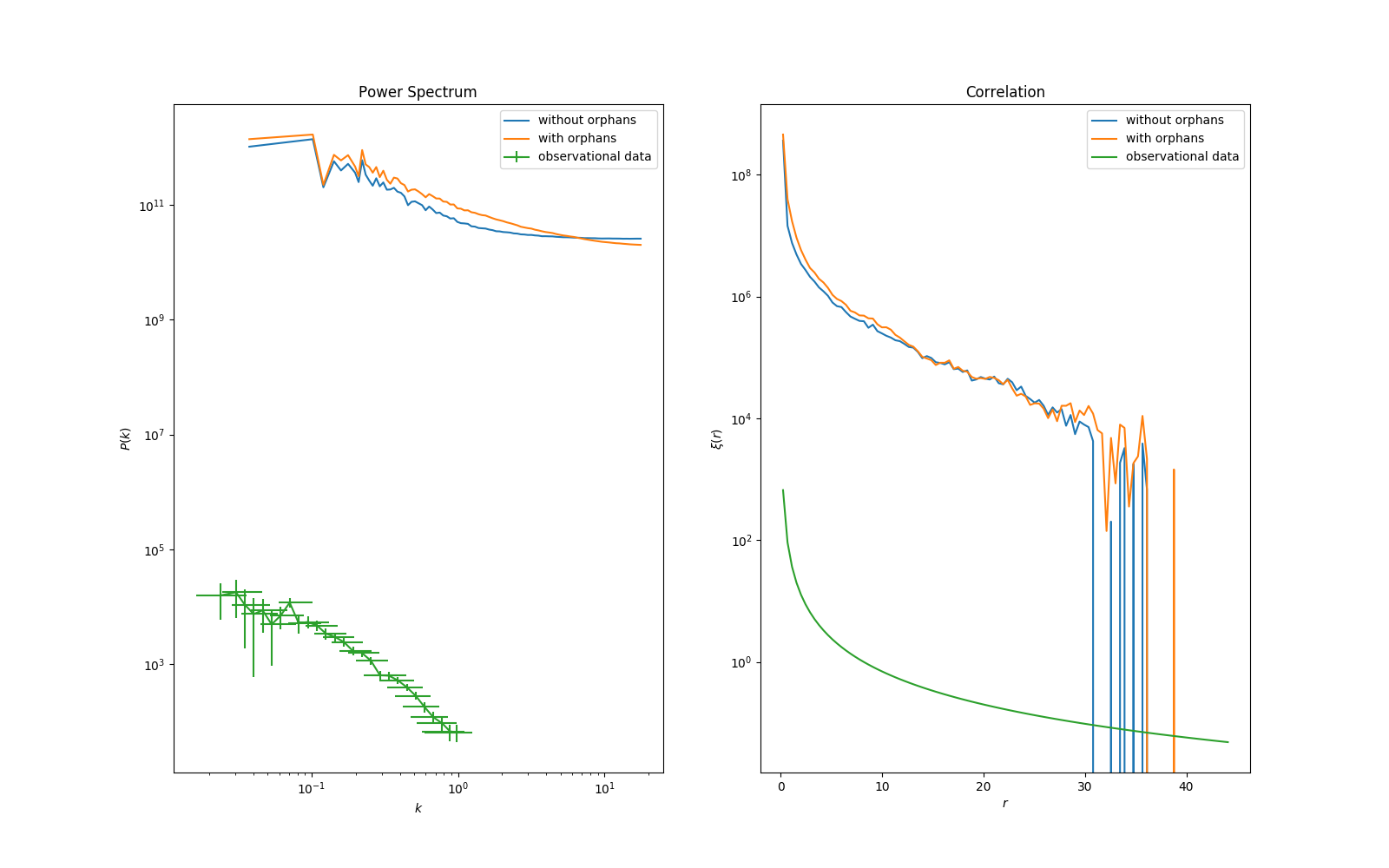 Now clearly something is way off here, even though the general shape doesn't seem too bad. I have 2 suspicions for the reason behind this:

1) I must be doing something wrong with the normalisation.

I get exactly correct results (nice peaks and a sinus wave) for both the Fourier transform and the inverse transform by following these rules:

1 ) To change between transform conventions, substitute $k \rightarrow 2 \pi k$ : a $k$ in the FFTW convention corresponds to $2\pi k$ in the other convention.

2 ) Normalise by dividing by $N$ after the inverse transform.

If necessary, I'll gladly provide the code I tested this with.

But the problem remains. I still think that I am doing something wrong with the normalisation, because I verified that the value of the Power spectrum $P(k)$ indeed does vary by orders of magnitude using different numbers of samples $N$, the correlation function however doesn't. Maybe this is somehow connected to the fact that I compute the square value $\delta(\mathbf{k})\bar{\delta}(\mathbf{k})$.

Can anybody please please help me? I've been stuck on this for weeks now.

Edit: I've uploaded my code here: https://bitbucket.org/mivkov/sharing/src/master/computing_power_spectrum/ if anyone wants to see it directly.

Browse other questions tagged galaxy cosmology data-analysis spectra or ask your own question.

4
Missing Terms in Weinberg's treatment of perturbations on Newtonian Cosmology
4
Estimating galactic dust extinction for medium band filters
3
How deep is the “A” Fraunhofer line in the solar spectrum? Is it from the Sun's or Earth's atmosphere?
4
Tests for code that computes two-point correlation function of galaxies
1
Ensemble average VS spatial average for a cosmological density field
6
Motivation for using $\sigma_{8}$?