I have seen models of 2 black hole mergers. 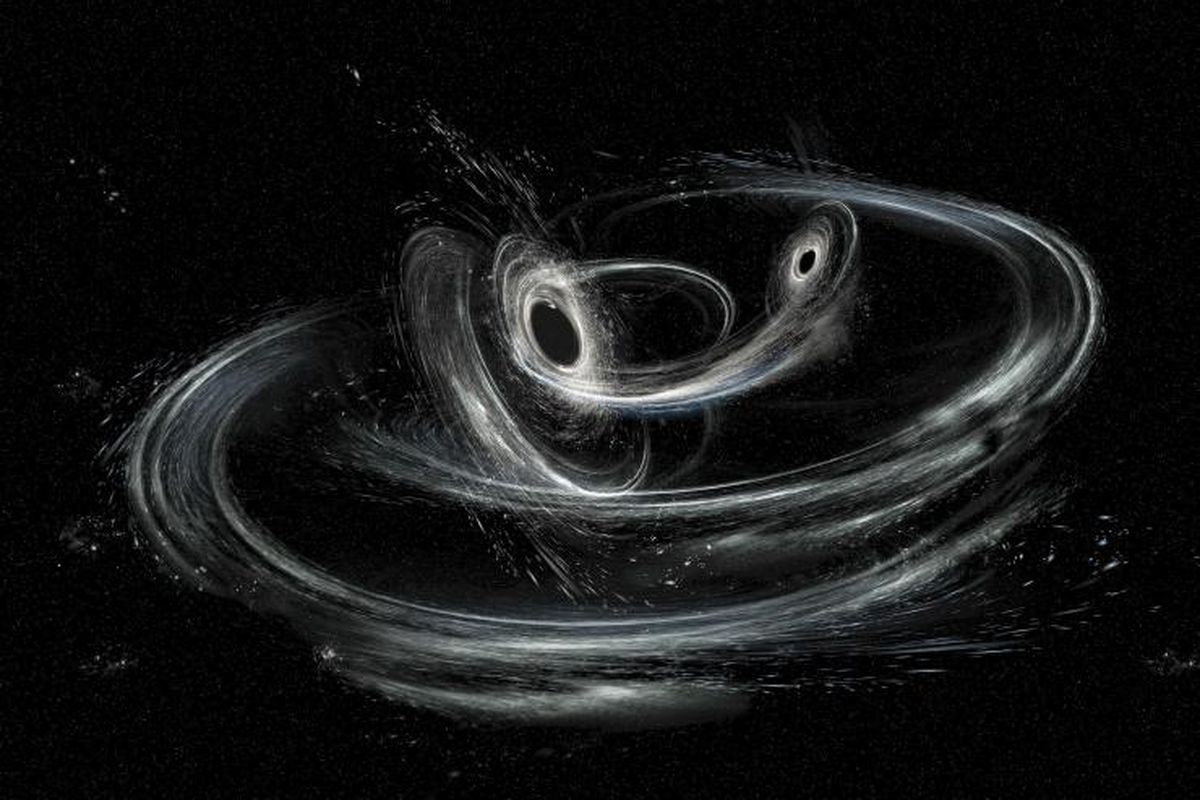 When we see a space ship appear to be frozen in time as it approaches the event horizon then would a back hole merger be faster then perceived in our time?

John put it well in the comments: People say merging black holes end up moving at half the speed of light, but don't say anything about the gravitational time dilation wherein the "coordinate" speed of light goes to zero at the event horizon. Which would mean black holes would have to be moving faster than the local speed of light. How can this be right?

Can things move faster than light inside the event horizon of a black hole?

It varies per object, and throughout the merger (and doesn't neatly increase linearly).

The first animation shows what happens when two large objects approach each other, miss, and then don't slingshot away from each other - they become trapped in an extreme elliptical orbit.

The second animation shows what happens when the orbits are relatively close, > ~0.01 parsecs - instead of an elliptical orbit they have a somewhat circular-like orbit, around the barycenter.

There are many different trajectories and resulting orbits, the binaries are also affected by: inflow, outflow, and other objects entering and leaving the area of their orbits. No one answer, no two are alike.

The paper "Observation of Gravitational Waves from a Binary Black Hole Merger" (Feb 11 2016), by B. P. Abbott et al. offers one study of one merger, they provide this illustration: 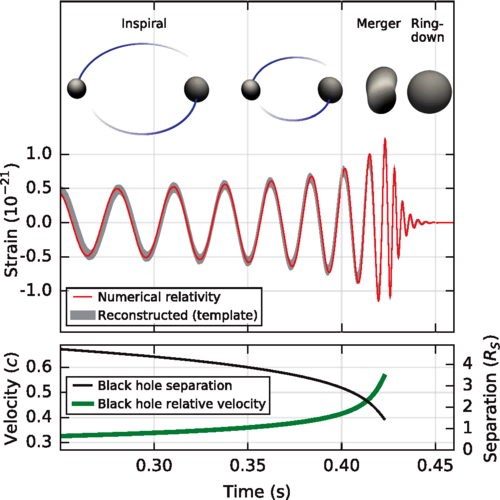 Top: Estimated gravitational-wave strain amplitude from GW150914 projected onto H1. This shows the full bandwidth of the waveforms, without the filtering used for Fig. 1. The inset images show numerical relativity models of the black hole horizons as the black holes coalesce. Bottom: The Keplerian effective black hole separation in units of Schwarzschild radii ($R_S=2GM/c^2$) and the effective relative velocity given by the post-Newtonian parameter $v/c=(GMπf/c^3)^{1/3}$, where $f$ is the gravitational-wave frequency calculated with numerical relativity and $M$ is the total mass (value from Table 1).

In-between those distances occurs a situation referred to as the final parsec problem.

Initially, the explanation is easy. The black holes transfer energy to gas and stars between them, ejecting matter at high speed via a gravitational slingshot and thereby losing energy. However, the volume of space subject to this effect shrinks as the orbits do, and when the black holes reach a separation of about one parsec, there is so little matter left between them that it would take billions of years to orbit closely enough to merge - more than the age of the universe. Gravitational waves can be a significant contributor, but not until the separation shrinks to a much smaller value, roughly 0.01–0.001 parsec.

Nonetheless, supermassive black holes appear to have merged, and what appears to be a pair in this intermediate range has been observed, in PKS 1302-102. The question of how this happens is the "final parsec problem".

A number of solutions to the final parsec problem have been proposed. Most involve the interaction of the massive binary with surrounding matter, either stars or gas, which can extract energy from the binary and cause it to shrink. For instance, if enough stars pass close by to the orbiting pair, their gravitational ejection can bring the two black holes together much quicker than would otherwise be the case.

See the "final parsec problem" link for the whole webpage.

8
Can things move faster than light inside the event horizon of a black hole?